He’s not actually trying to hit you up on Instagram 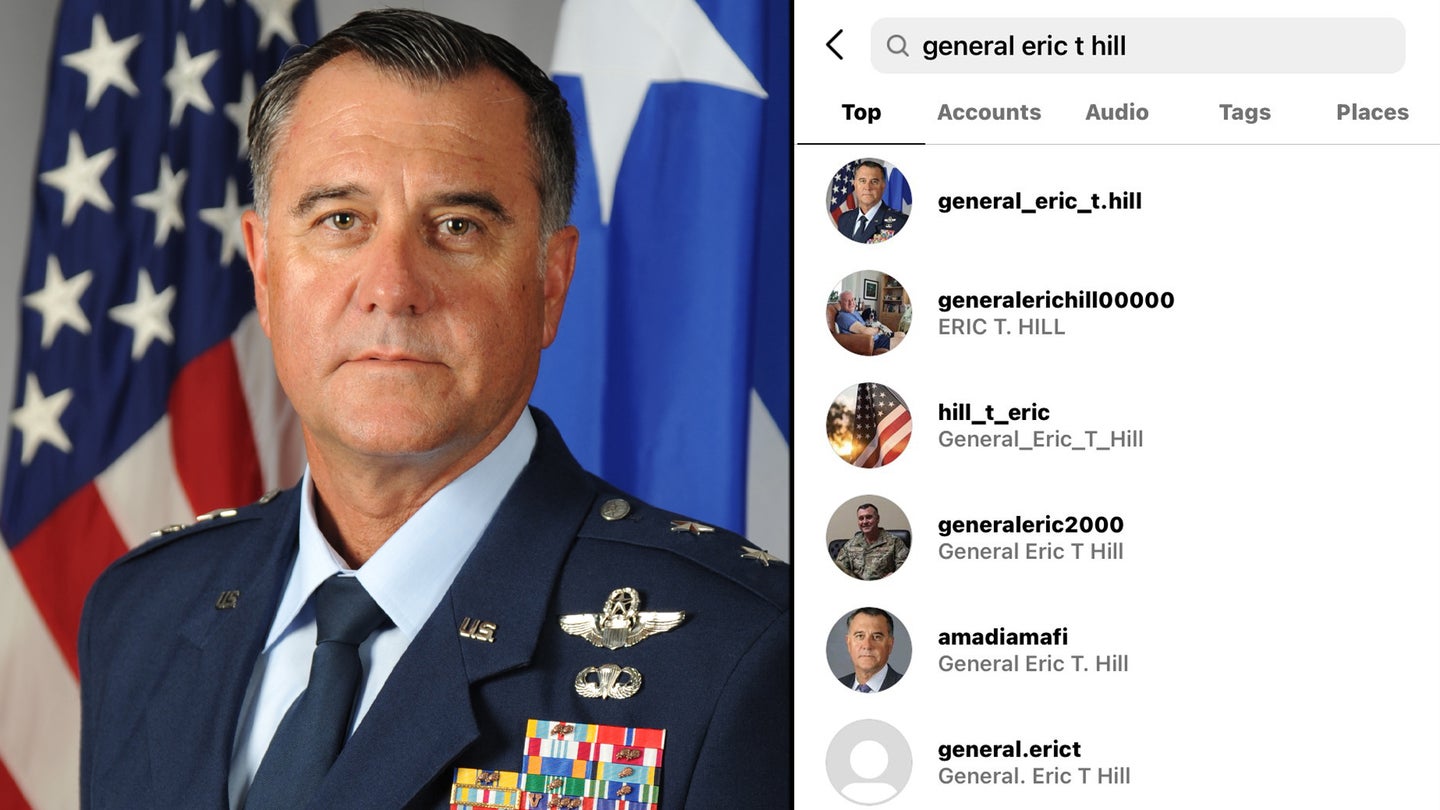 The Air Force wants people to know that Maj. Gen. Eric T. Hill isn’t after their money. Hill, who served as the deputy commander for Air Force Special Operation Command which oversees everything from pararescue teams to combat controllers, has had his name and face used across the internet in catfishing, phishing and various other attempts at cybercrime.

His name frequently came up this year on question and answer sites or forums like Quora and Reddit. People wanted to know if Hill, who oversaw secretive, lethal black ops missions, really was hitting them up via Gmail or online dating sites. Going off of those online queries, people have been impersonating the general since at least 2020. As journalist Spencer Ackerman noted, there are many Instagram accounts also posing as Hill.

Some pages feature his actual job and links to his official biography, as well as photos of American troops deployed, possibly to the Middle East. Others are more openly spam related with images tied to cryptocurrency.

Hill had his retirement ceremony on July 29, and will fully retire by year’s end. Hill’s name and image have apparently proliferated so much online that when Task & Purpose contacted Air Force Special Operations Command, a public affairs officer laughed and said he and the command were familiar with the matter.

Due to his retirement, Hill could not be reached directly for comment on the matter. However, AFSOC told Task & Purpose that Hill was familiar with the repeated attempts by criminals to pretend to be him.

“This is a great example that it’s important to remember that the accounts you interact with don’t always belong to who they appear to,” a public affairs officer for the command told Task & Purpose.

AFSOC, based out of Hurlburt Field, Florida, commands a range of pilots, air support system teams and an array of special operations ground forces which are deployed around the world.

This isn’t the first time a high-ranking general has been used by Internet scammers as a persona. Would-be criminals posed as U.S. Army Gen. Paul Nakasone, chief of US Cyber Command, to try and catfish multiple women via Gmail. Gen. Patrick Donahoe had people impersonating him on Facebook — with a different personal background, such as claiming to originally be from Syria — and he even posted about trying to get the imposters’ accounts taken down. Romance scams are an issue with the military; the Army’s Criminal Investigation Division has warnings for people about what to avoid, given the repeated cases.

Hill himself, who previously oversaw the multinational Special Operations Joint Task Force-Inherent Resolve which launched kill missions against ISIS in Iraq and Syria, has had a lengthy career in the U.S. military. He served in the Army before joining the Air Force. After leading Inherent Resolve’s special operations detachment in June 2020, he took his post at Air Force Special Operations Command. In May he announced plans to retire.

It’s unclear why Hill himself was so popular among criminal impersonators.