"She genuinely wanted to do well that day, she wanted to sing the national anthem for all Americans." 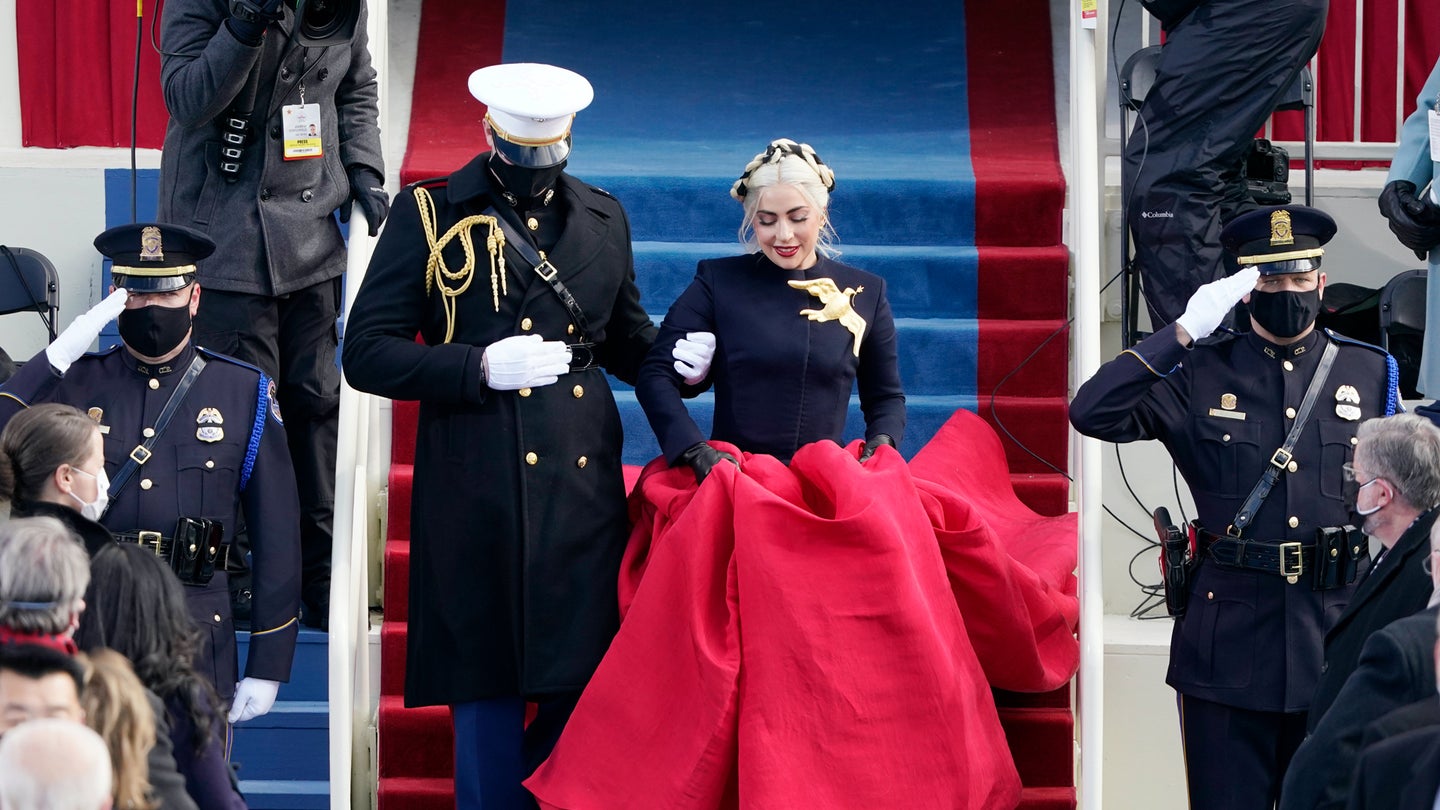 Lady Gaga arrives to sing the National Anthem during the 59th Presidential Inauguration at the U.S. Capitol in Washington, Wednesday, Jan. 20, 2021.
SHARE

Marine Corps Capt. Evan Campbell was simply in the right place at the right time.

The 30-year-old Marine from San Antonio, Texas, was one of a dozen Marines and soldiers working in the area where distinguished guests sat during the presidential inauguration of Joe Biden on Jan. 20. And during a rehearsal the day before, when they realized that Lady Gaga may need to be escorted down the stairs before she would sing the national anthem, Campbell just happened to be the one chosen.

“There was a concern — obviously she was wearing this very beautiful, very large dress, and there was a concern that she might need some help getting down the stairs,” Campbell told Task & Purpose in a phone call on Wednesday. “So they basically looked around and I was one of the taller, larger individuals, and they just asked if I would be willing to assist and I was more than happy to.”

He didn’t tell a soul what he was asked to do because he “wanted to make sure that I didn’t screw it up before I went hyping it.”

On the day of the inauguration, Campbell was helping other guests get seated, including former presidents and Supreme Court justices.

Campbell, who deployed to Iraq in 2016 and to Syria from 2017 to 2018, is no novice when it comes to working with notable figures or celebrities. He’s currently assigned to Marine Barracks Washington, where he works as a White House social aide and has met other distinguished guests of the White House. His favorite moments, he said, have been meeting Medal of Honor recipients and Gold Star families.

But he said he didn’t actually meet Gaga — who he described as “very nice and gracious with everyone” — until around 15 minutes before they were scheduled to walk down the stairs together. As they stood waiting, Campbell noticed that Gaga was beginning to look a little nervous.

He said that they talked a little longer and Gaga asked how long he’d been in the Marine Corps. (He joined in 2013.) She also told him this would be “the most important day of her life, singing the national anthem.” He described her as “incredibly genuine,” and said she joked at one point that they had an equal chance of tripping over her dress.

Then, she asked if he would like to pray with her ahead of the performance.

Campbell said the moment was “very heartfelt.” He then walked her down the stairs and she gave her performance, which he believes blew away “every single person” who heard it.

“She genuinely wanted to do well that day, she wanted to sing the national anthem for all Americans,” he said. “It was very touching.”

While he certainly knew Lady Gaga’s music before meeting her, Campbell said he’s now a fan of her, on a personal level. “She is a phenomenal person,” he said.

Ultimately, what Campbell is most proud of that day is the way the Marine Corps was represented. As the son of a career Marine, he said joining the Marines was “an obvious choice” for him and something he wanted to do his entire life.

And while he may be the one in the photos with Lady Gaga, what the rest of the world sees is a U.S. Marine.

“The biggest thing for me is when those memes came out — you know, find someone that looks at you the way she looks at a United States Marines — I took a lot of pride in that,” Campbell said. “I think at the end of the day, we all want to do something that represents the Marine Corps well … people were sending me posts from Vogue Paris, Cosmo, I mean millions of people have now seen a United States Marine with Lady Gaga, so I’m just glad I did the Marine Corps proud on this one.”