Soldiers may enjoy their time in a Humvee or Huey nowadays, but there is no military vehicle more beloved than the World War II Jeep. 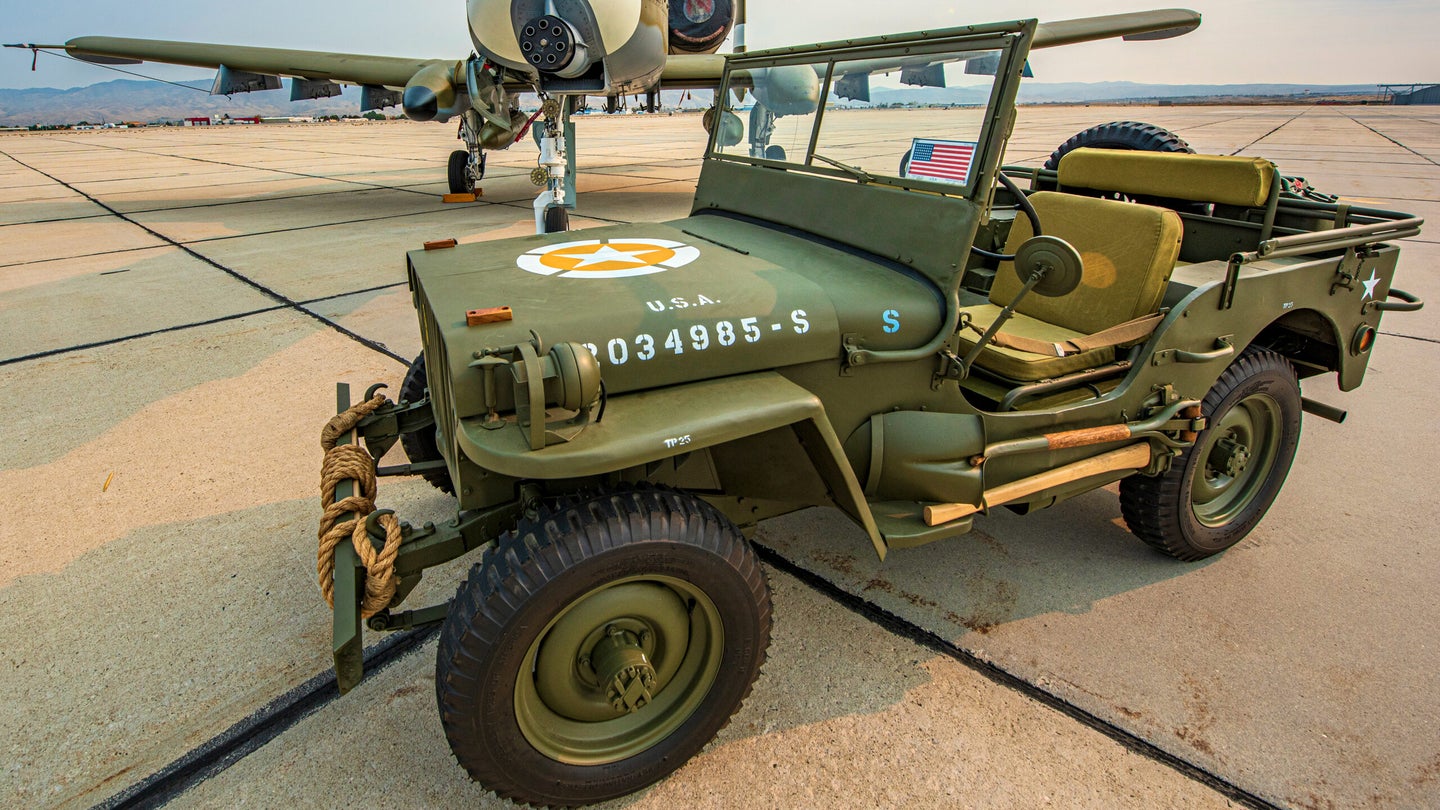 In 1945, Sgt. Jim Bryan had a problem. He had crashed his Jeep and was worried about his chain of command, sure, but more worried about Elaine. Elaine was the girl back home, the one he’d named the jeep after. It didn’t seem like a good omen to total the truck named for the girl back home. Luckily though, the demotion to private and the crashed namesake didn’t scare off the other Elaine and they got married at the end of the war, a fact I’m glad about, since Pvt. Jim Bryan was my husband’s grandfather.

Soldiers may enjoy their time in a Humvee or Huey nowadays, but there is no military vehicle more beloved than the World War II Jeep. Artillery might get named after an AC/DC song and a plane might be named after a Marvel Comics character, but it’s hard to imagine a single piece of military equipment now being named Elaine. The Jeep is not as tough as a tank or fast as a jet, so how did this little truck become the darling of the military-industrial complex? Here are a few moments in Jeep history that help explain what’s so special about the Jeep.

The Jeep was inspired by tractors and land mowers

The Jeep’s signature appeal is that, like a candy bar on Halloween, it’s fun-sized. It’s small enough to be agile, but rugged enough to serve in combat zones, even before the Green Beans Coffee can arrive.

The closest forerunner to the Jeep might actually be the mule. Horses and mules were more than just mascots at the Army-Navy game; they were the primary supply haulers that brought artillery, ammunition and everything else to the fight. Animals had their advantages. Horses could jump ditches and ford rivers, unlike the trucks and motorcycles the Army was trying out a century ago. But they had one huge disadvantage: when an animal got sick or died in combat, it hurt morale, or slowed operations as the soldiers stopped to care for them. When a truck died, soldiers just got mad at the perceived low quality of workmanship.

As cars developed, the Army had to find wartime applications for this burgeoning new technology. The debate over the correct size of vehicles for combat started as soon as automobiles were used in war on a large scale during World War I. Logisticians preferred big trucks that could carry a lot of gear and a lot of troops. The artillery wanted something that could move their massive guns, and the cavalry wanted something fast. During World War I, there was also the matter of which civilian technologies were fast and easy to purchase without developing a special wartime version. So, some of the first automobiles were the trucks and staff cars that could be purchased “off the shelf.”

The Jeep also took its inspiration from some of the other “off the shelf” options: tractors and lawnmowers. After all, if you’re looking for a way to move artillery, it makes sense to either push it or pull it, the way that a horse pulled a cart. If you were looking for a vehicle that was great in the mud and had good pulling power, civilian tractors certainly got the job done. Similarly, the Army looked into a motorized pushcart that looked like a lawnmower.

The Jeep was almost named the ‘Belly Flopper’

Artillery wasn’t the only branch that used horses, and so those horse-boys of war, the cavalry, were also looking for a horse replacement. The cavalry required a reconnaissance vehicle: light, fast, and with a low profile. One proposed iteration was the Howie-Wiley carrier, or the “Belly Flopper,” essentially a motorized platform that could carry up to two soldiers in the prone position. While there were a lot of advantages of not having to yell, “I’m up, he sees me, I’m down,” while advancing on a hostile target, there were just as many disadvantages, not the least of which was having to have a truck for your truck to move it more than a few miles. And so, generations of Americans were saved from having “Belly Flopper Operator” on their DD-214s.

No one wanted to make it

It wasn’t until 1940 that the Army settled on a recommendation that the sweet spot between a tractor and the Belly Flopper was a quarter-ton four-wheel-drive truck. It had to be capable of carrying 600 lbs, but couldn’t have a wheelbase of more than 80 inches. And while you’d think all the big players would be gunning to get this sweet military contract, out of 135 American auto manufacturers, only two agreed to submit proposals. Maybe it was that the contract specified that 70 vehicles had to be produced in just 75 days? The Bantam Company delivered their prototype first, which generated huge buzz for the company, even if they blew the specs of the contract in nearly every way and had a problem with the tail lights falling off the trucks due to vibration. The Willys-Overland company, mostly known to the Army as an artillery cart company, submitted the high bid because they waited for axles to come in stock. After extensive field trials, the Willys-Overland model, with its oversized engine, outperformed the Bantam, even if the engine broke the weight standards laid out by the Army. The oversized engine would be one of its most endearing features – two Jeeps could even tow a tank. There was, however, one problem left: Willys would struggle with the production capacity, and the Army wanted two sources of supply in case of sabotage. In a chance meeting in Washington, D.C., Edsel Ford, himself, agreed to a revolutionary deal — the Ford Company would produce the Willys truck with the Willys name and completely interchangeable parts. And so, many Jeeps were actually Fords.

It’s had a lot of names

To be clear, there are a lot of theories as to how what was once called the “Ford, G.C.A.,” became the “Jeep.” And there were a lot of nicknames bandied about during production and testing, including “Blitz Buggy,” “Puddle Jumper,” “Midget,” and “Peep.” A common belief is that Jeep comes from the abbreviation “G.P.” pronounced as jeep, which was an old World War I grease monkey term for any military vehicle.

The name “Jeep” had been around since 1936 when the popular comic strip “Popeye the Sailor Man” was joined by a fourth-dimensional creature called a Jeep that took the form of a dog. It’s a real shame that this has not been re-booted into a movie, but Eugene the Jeep lived on a diet of orchids and could walk through walls. One of Willys-Overland’s main test drivers, Irving “Red” Hausmann certainly preferred the nickname Jeep, and called it that at every opportunity. And so, as he took journalist Katherine Hillyer on a test drive of the vehicle through the unpaved ravines of Rock Creek Park in Washington, D.C., the name Jeep was seared into her brain. Her 1941 article launched the name Jeep into the world, where it went viral everywhere, perhaps, except in the Army air corps, where they were using the name Jeep to describe an experimental plane and called the truck the Peep, instead. And so, throughout the war, an air-ground, Peep-Jeep debate raged on.

It drove up the Capitol steps

The next step was to win over Congress to get the vehicle funded. The current, yearslong military acquisition process lacks a lot of pizzazz, compared to the sunny day in 1941 when Red Hausmann drove a Jeep from Toledo, Ohio to Washington, D.C., and gave members of Congress the chance to drive up and down the Capitol Building steps.

It was a pop culture sensation

It’s hard to imagine Ariana Grande singing a song about today’s light medium tactical vehicle (LMTV), but one of the top songs on the radio in 1942 was “Six Jerks in a Jeep.” The Jeep was a pop culture sensation. The movie “Four Jills in a Jeep” added to the popularity, but so did other pop songs like “Jeep Jockey Jump.”

The original Jeep came in four languages, and a warning for Brits!

The Jeep wasn’t strictly an American phenomenon. Once the truck was in production, allies all over the world wanted it. The WWII Jeep came with instruction plates in English, Russian, Chinese and Spanish. Although Willys and Ford made accommodations for language, they drew the line at producing a right-hand drive version for the Brits. This is saying something considering that Queen Elizabeth and Winston Churchill were both known to use the Jeep.

The Jeep served on the homefront

At the end of World War II, the Jeep followed the path of its military drivers and made its way into the civilian world. In civilian use, the Jeep returned to its tractor roots to pull threshers and plows. Unlike the tractor, old military Jeeps could be unhitched to take the kids to school. The Jeeps with compressor units were popular with house painters. And special Jeeps outfitted with water units were used in firefighting. The civilian jeep, or C.J., was first produced in 1945, proving that the little truck would always find a use in war or peacetime. The Jeep has been in production in some form or fashion ever since, even if there hasn’t been a hit Jeep song in a while.

Miranda Summers Lowe is a curator of modern military history at the National Museum of American History, Smithsonian Institution, and an officer in the Army National Guard. Her publications include contributions to Modern Warfare in an Ancient Land, The U.S. Army and the COVID-19 Pandemic, Why We Write: Craft Essays on Writing War and articles for The New York Times, Military Review, and War on the Rocks. Follow her on Twitter at @msummerslowe