UNSUNG HEROES: The Woman Soldier Who Received The Silver Star In Iraq

In 2005, on a supply convoy in Salman Pak, Iraq, just south of Baghdad, Leigh Ann Hester and her soldiers... 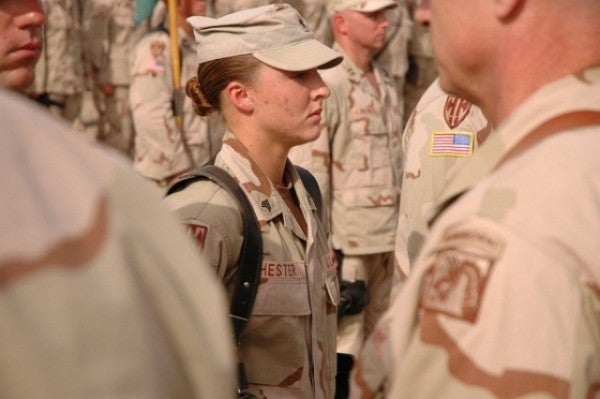 In 2005, on a supply convoy in Salman Pak, Iraq, just south of Baghdad, Leigh Ann Hester and her soldiers were ambushed.

Her squad consisted of two women and eight men in three humvees. They were ambushed by more than 50 insurgent fighters, wielding AK-47s, rocket-propelled grenades, and RPK machine gun fire, according to her award citation.

Hester, a sergeant assigned to the 617th Military Police Company with the Kentucky Army National Guard, led her team out of the ambush’s kill zone and into a flanking position, cutting off the insurgents’ escape route.

What was once an ambush quickly became a terrible day for the enemy.

Now on the offensive, Hester and her platoon sergeant, Staff Sgt. Timothy Nein, assaulted the trench line with hand grenades and M203 grenade rounds. They cleared two trenches in this manner, and engaged dozens of insurgent fighters in small-arms fire.

In all, 27 insurgents were killed, six were wounded, and one was captured. Hester herself reportedly killed at least three of them.

Hester is one of the most combat-decorated women in the wars in Iraq and Afghanistan. In fact, she’s the first woman to receive the Silver Star since World War II. Only one other woman has received the award since 9/11, Spc. Monica Lin Brown in 2008 for actions in Afghanistan.

Hester’s award is a testament to the blurred and undefined front lines in counter-terrorism and counterinsurgency operations.

“Your training kicks in and the soldier kicks in,” Hester said when she received the award, according to a U.S. Army report. “It's your life or theirs … You've got a job to do — protecting yourself and your fellow comrades.”