UNSUNG HEROES: The Army Scout Who Swam Through A River And Cut Through An Electric Fence

The river patrol had been a debacle. After receiving reports about insurgent movements and weapons smuggling along the Tigris River... 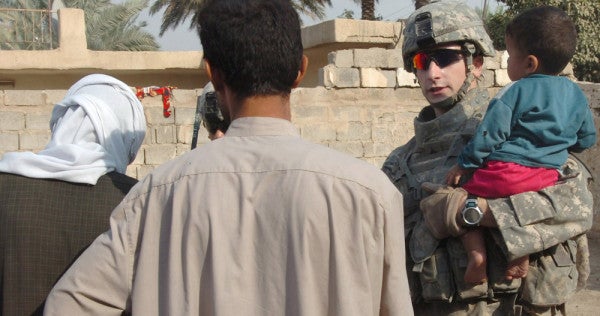 The river patrol had been a debacle.

After receiving reports about insurgent movements and weapons smuggling along the Tigris River in northern Baghdad, the coalition had decided to try a river patrol. On February 16, 2007, four boats set out, manned jointly by Iraqi police and American soldiers from the 1st Squadron, 7th Cavalry Regiment.

Unfortunately, the boats proved to be easy targets for an ambush from the riverbanks. “Numerous insurgents popped out of buildings on both sides of the river and peppered the unconcealed blue boats with bullet holes,” according to a 2008 report from Stars and Stripes.

“People were lining the banks to shoot at us,” said Sgt. Ken Thomas, a team leader and cavalry scout, in an Army report. “We were in a complex linear ambush and the enemy was taking advantage of the terrain and we were vastly outnumbered … We were pretty sure we were going to die.”

Thomas and the others returned fire. He told Stars and Stripes he unleashed at least 570 rounds from his M4 rifle and 600 rounds from the boat’s PKC machine gun.

It wasn’t enough. Recognizing the danger of their position, the platoon leader, 1st Lt. John Dolan, ordered the boats to turn around. The two boats in the rear complied readily, but Dolan and Thomas were less fortunate.

Dolan’s boat, which was in the lead, was piloted by an Iraqi policeman. Before he could complete the turn, he was fatally shot. The boat crashed into an island.

Then an insurgent bullet struck the engine in Thomas’ boat. It lost power and ran aground. “We hit a sand bar and our boat got stuck, so we were like sitting ducks,” he told the Army reporter. To make matters worse, “We were getting hit pretty hard and there wasn't much cover in the river.”

“They told us that our equipment floats, but you're carrying an extra 60 pounds, and I was thinking to myself that I'd rather get shot than drown,” Thomas said, according to the the Army account. “Along with that, we were a lot heavier because we had brought a lot of extra ammo and signal equipment for this mission.”

Without the weight of Thomas and Johns, the Iraqi policemen were able to dislodge the boat. They picked up Thomas and Johns on the other side of the island and headed for the shore.

The riverbank wasn’t much better. “When we got there we found a crater and got inside it to get cover, but it wasn't big enough for us all to fit in,” Thomas said in the Army report.

Thomas, the scout, set off to find a way out for the men. “As he climbed,” Stars and Stripes notes, “Iraqis armed with AK-47 rifles as close as 50 feet away were taking aim and machine-gun fire continued from across the river.”

“You could see them running outside their homes to shoot at us,” Thomas told Stars and Stripes. “They were shooting fish in a barrel.”

Thomas discovered an escape route on the other side of a high metal fence. The only problem was that downed power lines were draped across the fence, shooting sparks of electricity.

Nevertheless, according to Thomas’ award citation, “Thomas … cut a hole using wire cutters, ignoring the painful electrical shocks he had to endure to complete his task.”

“It shocked the hell out of me,” he told Stars and Stripes, but he persevered. “I figured we better get off this bank or they’re going to start firing .”

The men scampered through the hole and found cover in a house. They continued to engage with insurgents from the rooftop until helicopters arrived to evacuate the men from Dolan’s boat.

During the two-hour engagement, one Iraqi policeman was killed. All of the Americans survived. Twenty-two insurgents were killed and more than 50 were wounded.

For his actions that day, Thomas received the Silver Star, the third-highest award given for gallantry in combat.

“Thomas really did an amazing job, and just did what anyone of those guys would have done that day,” Dolan reflected. “He acted in a manner with no regard for his own safety or life, but what he did, he did for his brothers.”

“Scouts are trained not to be victims of circumstance, but to create opportunities to survive and carry on the fight,” he added. “This mission was a shining example of that.”