The group was originally part of the “People’s Convoy.” 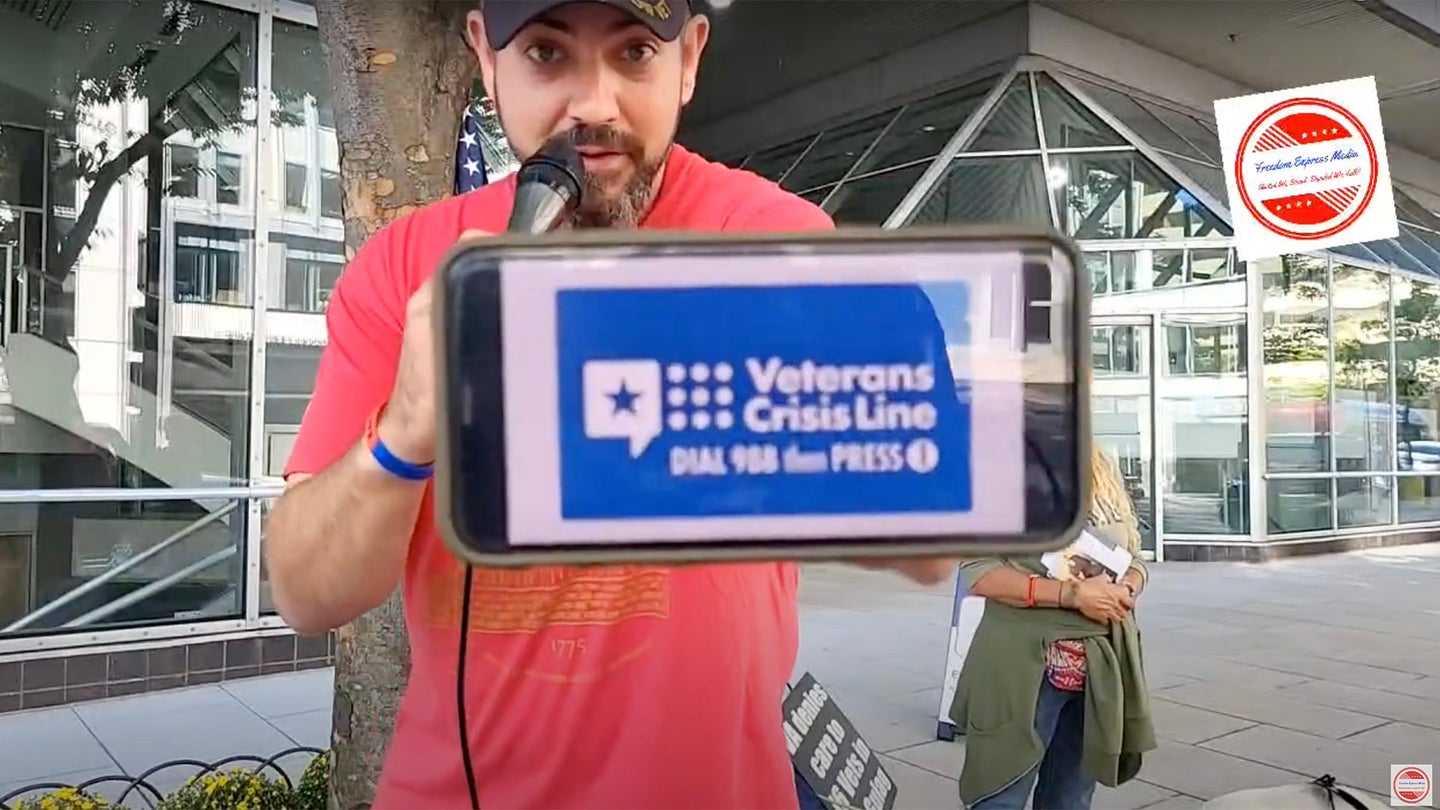 A man who identified himself as Justin Johnson urged supporters of the 1776 Restoration Movement to call the Department of Veterans Affairs Veterans Crisis Line to protest how veterans arrested for the Jan. 6 Capitol Hill riot are being treated in custody. (Screenshot).
SHARE

A self-titled group of “patriots” launched a concerted effort to crank call the Department of Veterans Affairs’ Veterans Crisis Line on Monday, and urged supporters to clog the line with calls complaining that veterans arrested for the Jan. 6 Capitol Hill riot are being mistreated while in custody.

Located in Bunker Hill, West Virginia, the 1776 Restoration Movement describes itself on its Facebook page as a “Patriot movement for the restoration of our constitutional republic, and return to a moral society.”

Originally part of the “People’s Convoy,” which has tried to clog traffic around Washington, D.C., to protest vaccine mandates, the group’s leader David “Santa” Riddell was arrested on July 4 for blocking roads in the nation’s capital during an Independence Day parade.

On Monday, the group held a live-streamed vigil outside the VA’s National Capital Regional Office in Washington, D.C., when a man who identified himself as “Justin Johnson” told people watching the event online that they could help the cause by calling the crisis line.

Johnson, who provided his name earlier on Monday when he tried to speak with a VA official, then put his phone right up to the camera to show people the number to call and said: “So, let them know that there is inhumane treatment going on at the D.C. jail.”

Johnson also claimed that more than half of the “political prisoners” currently in custody are veterans, including combat veterans who served in Iraq and Afghanistan, and he urged supporters to call the crisis line to tell the VA to intervene on these veterans’ behalf.

It is unclear how many of the group’s supporters called the Veterans Crisis Line. VA spokesman Terrence Hayes told Task & Purpose on Tuesday that he was not aware of any veteran who was unable to get through to the crisis line as a result of the 1776 Restoration Movement’s actions.

“Every veteran who called the crisis line yesterday was able to connect immediately with caring, qualified responders — there was no interruption of service,” Hayes said. “Veterans can always dial 988 and press 1 for free, confidential crisis support — 24 hours a day, seven days a week. We at VA are here for you.”

But one person tweeted a text purportedly from a veteran in crisis who was unable to get help on Monday because the Veterans Crisis Line was busy.

“When I couldn’t get through I almost went through with my plan but then my mom intervened,” the text says. “This has real world consequences. I just pray nobody took their life.”

Task & Purpose was unable to independently verify the authenticity of the text.

In a separate video posted on Twitter, Johnson boasted that his tactic of having callers flood the Veterans Crisis Line was “pretty effective,” adding, “So, the trolls, they took the bait.”

He also justified the attack by saying the Veterans Crisis Line is not the same as 911.

“I’ve called the crisis line before a few times and the first thing it tells you when you get on there is: If this is an emergency, please hang up and call 911,” Johnson said.

The Senate Veterans Affairs Committee has asked the VA for more information about how the 1776 Restoration Movement’s actions may have affected veterans who were trying to get help through the Veterans Crisis Line, a congressional staffer told Task & Purpose.

“The Veterans Crisis Line is a critical resource for veterans in distress, which is why it’s imperative that the system run smoothly and efficiently at all times,” said committee spokesperson Olya Voytovich. “Any obstruction of that service is completely unacceptable and morally reprehensible. The Senate Veterans’ Affairs Committee is in contact with the Department of Veterans Affairs to ensure this issue is resolved as quickly as possible.”

The VA’s most recent suicide prevention report found that 6,146 veterans had died by suicide in 2020, and that is 343 fewer reported deaths than in 2019.

However, a separate study determined that the number of veterans who died by suicide between 2014 and 2018 was higher than the VA reported, according to NBC News.

Released by America’s Warrior Partnership, a non-profit group working to prevent sucide deaths among veterans, the study indicated that an average of 24 veterans may have died by suicide per day, as opposed the average of 17.7 deaths per day reported by the VA during that time.

In response to the study, Hayes told Task & Purpose on Monday that the purpose of its suicide prevention report is to count every veteran who has died by suicide to prevent further deaths.

“Our methodology for creating this report is well-established and consistent, based on verified data from the CDC and DoD, and meets the quality and standards of a peer-reviewed publication,” Hayes said. “The bottom line is this: One Veteran suicide is one too many, and VA will continue to accurately measure Veteran suicide so we can end Veteran suicide.”