Former CIA officer Nada Bakos filed a lawsuit against the agency Monday on First Amendment grounds after its pre-publication review... 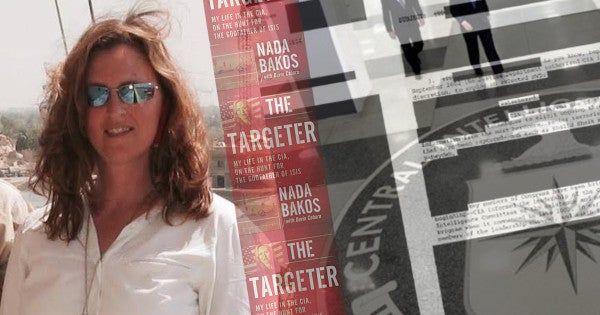 Former CIA officer Nada Bakos filed a lawsuit against the agency Monday on First Amendment grounds after its pre-publication review of her forthcoming memoir rendered the manuscript virtually unreadable.

“When you’ve got 14 pages in a row that are just black ink, that's problematic,” Bakos told me. “I’m sorry, but the word 'the' is not classified.”

Bakos' book, The Targeter: My Life In The CIA, On The Hunt For The Godfather Of ISIS, offers an inside look at her former role as an analyst and targeting officer, where it was her job to help CIA “find, fix, and finish” top-tier targets inside al Qaeda — such as Abu Musab al-Zarqawi, a Jordanian-born terrorist who led Al Qaeda in Iraq (AQI) until he was killed in a 2006 U.S. air strike.

As part of their employment, CIA officers have a lifelong obligation to submit materials intended for the public, such as speeches or books, to the agency's Publications Review Board, which ensures no classified information is revealed. But as Bakos wrote in an op-ed last year, the system is so “broken” that often ridiculous edits are demanded, in addition to a typical wait of a year or more.

Bakos waited two years — and when she got her manuscript back, it was filled with redactions. She noted it's not necessarily the entire fault of CIA's review board, since many redactions likely came from other agencies such as DoD and NSA, which also review books if the subject matter mentions them. (Bakos worked alongside both agencies when she traveled back and forth to Iraq from 2003 to 2006.)

Bakos was careful to keep information out of her book that she thought was classified. The issue for her is not just the government's redactions, but a lack of any explanation for them: She'd like to avoid making the same mistakes twice, but without a government rationale for the redactions, she doesn't even know what the mistakes are.

For example, if the NSA has a problem with her mentioning a guy named Mohammed from Baghdad who has curly hair, she has no idea whether the problem comes from naming him, saying where he's from, or describing his appearance. That little anecdote may come back completely redacted.

“I had to sit here and guess as to what their problems were, which is next to impossible,” Bakos said. “How many times do I have to do this before I get what DoD and NSA has problems with?”

Instead of sitting around waiting through a couple more years of reviews, she decided to take the CIA to court, where she's seeking “declaratory and injunctive relief as well as unspecified compensatory damages,” according to The Daily Beast. The case is being handled by Mark S. Zaid, a Washington lawyer who often represents members of the defense and intelligence communities.

“Nada played an historic role in the War Against Terror and has a fantastic story to tell. Serving the public interest does not mean one relinquishes constitutionally protected First Amendment rights,” Zaid told me in an emailed statement. “While properly classified information should always be protected, the Government has overstepped its authority to try and silence Nada for reasons unknown. That is simply unacceptable.”

So what's in her book? Although Bakos can't really dive much into specifics, she told me she wanted to write something different from past CIA memoirs that read like spy thrillers, instead offering a look at the world of operations and analysis, and explaining what it was like being at Langley during the run-up to the Iraq War.

“I wanted to provide it from a woman’s point of view, and walk people through what it’s like to work there,” she said. “You’re in my shoes and I’m kind of pulling back the curtain so you can see the good, bad, and the ugly.”

Maybe some day we'll get to read it.

This post has been updated with a statement from Mark Zaid.