Why ‘Band Of Brothers’ Lasts: A Perspective From One Of Its Writers 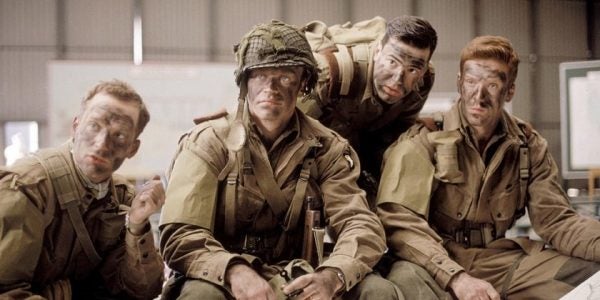 True story: When Tom Hanks told me and the other screenwriters of Band of Brothers that he was going to place interviews with the “guys” (as we called them) in front of our episodes, we all howled what a terrible, awful idea it was. It would make everything that followed look like Hollywood re-enactments, just actors in costumes with toy guns.

We were so, so wrong.

The interviews gave everything that followed a gravitas, a patina of reality, that drove home in a fashion better than any of our writing could do that this was real life. That this happened to real men. And many didn’t make it home.

I vividly recall our collective nervousness as the show was about to air. Were there too many characters? Aren’t they all dressed alike? Will the audience be able to track who is who? Or is it just a mush of handsome actors in Corcoran jump boots?

And then there was the concern (by the writers) of a certain unevenness in the show. There were seven writers, and surprisingly little communication between us. One lived in Paris, another on a boat in San Francisco, another in Carmel, and the rest in Los Angeles. We had exactly one “all hands” meeting, and barely talked story during any of it. We pretty much each focused on our own episodes, trusting that Tom and Steven would make sure it all fit together.

But we were definitely worried. One episode had “Bull in a Barn” (as we called episode four, the episode that was the most re-written, as I recall), another had a medic we barely see in other episodes, and another had an alcoholic intelligence officer trying to make sense of it all. Would it add up to a cohesive whole?

The answer, as we now know, is yes. That disparity of points of view is one of the show’s greatest strengths.

Another strength? Band of Brothers was one of the very first TV shows to be shot and broadcast in widescreen — at a time when very few televisions were made that way (most people originally saw the show with black bars on the top and bottom of their square TV screens). Same thing with the sound. Tom and Steven insisted that it be mixed like a movie, in surround sound, when very few people had home surround systems. I am convinced that if we had not done these things — at Steven’s insistence, by the way — that today, the show would look and hear antiquated, as if from another era. Instead, technically, it still holds its own against any movie or TV show made today.

But ultimately, I think Band of Brothers’ endurance can be attributed to two things: the inherent power of Easy Company’s story, and the commitment of every one of the thousand or so people who worked for years to get that story right.

Additionally, ten and a half hours gave us the time to explore the experiences of infantrymen in a way that had never really been done before. Universal truths about warfare were shown. Good leadership. Bad leadership. The exhilaration of war. The horrors of war. Fought by men of honor, and men not so honorable.

But mostly, Band of Brothers succeeded in living up to its ambitious title. Men (and now women) fight for many reasons, but mostly, they fight, kill, and die for their friends in the next foxhole.

John Orloff was nominated for an Emmy for his writing on “Band of Brothers,” as well as an Independent Spirit Award for his screenplay for “A Mighty Heart,” the story of Daniel Pearl’s abduction and murder. He is currently adapting Don Miller’s “Masters of the Air” into a 10-hour miniseries for Tom Hanks, Steven Spielberg, and HBO.