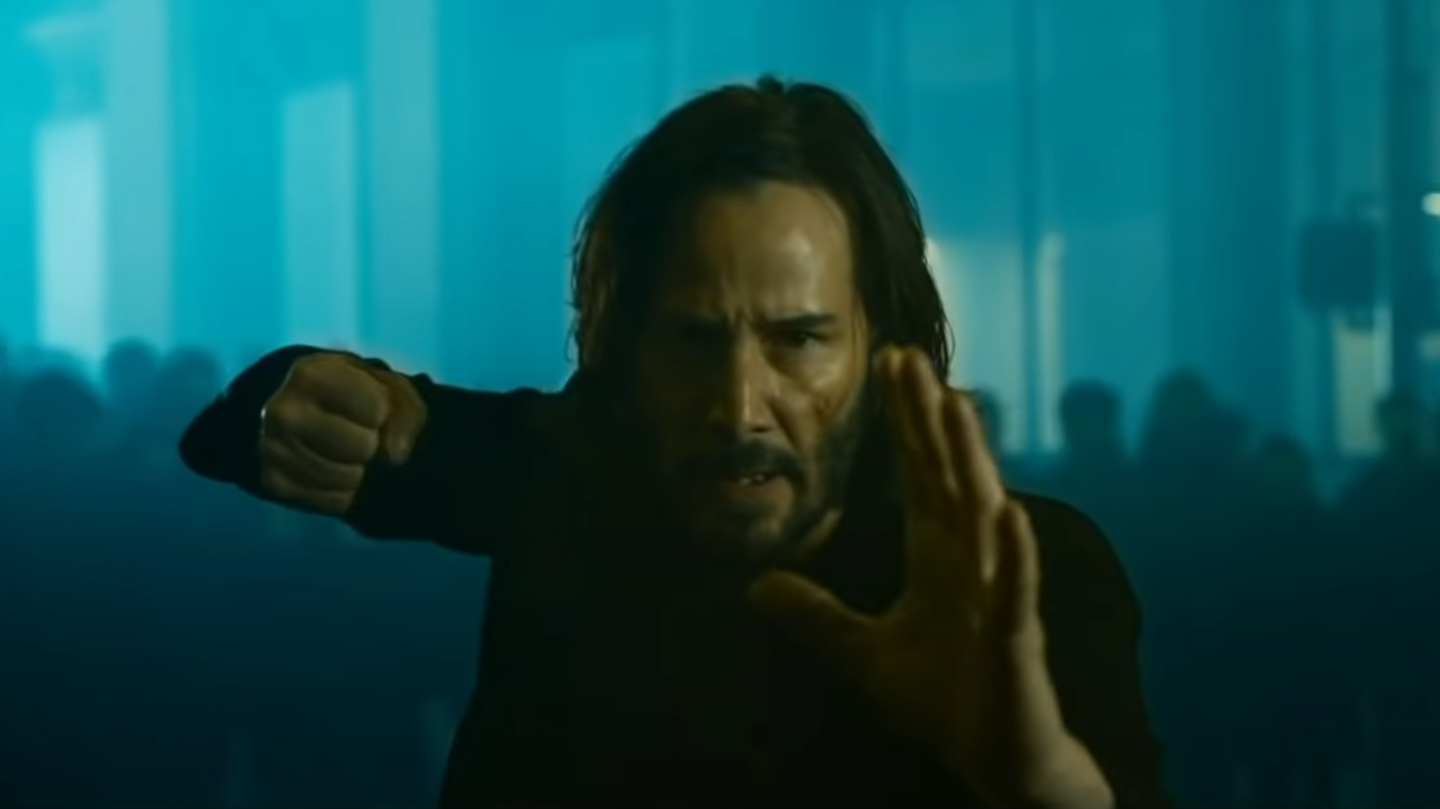 The teaser trailer for “The Matrix Resurrections” is here and it has a lot jammed into it — some dude materializing out of thin air, blue pills, a Neil Patrick Harris voice-over, a bunch of new characters, and a long-haired Keanu Reeves who looks more like the hitman John Wick than the series’ alternating crew- and buzz-cut rocking Neo. But something is missing.

In the immortal words of humanity’s chosen one in the war against the machines, the trailer needs guns. Lots of guns.

The hotly anticipated trailer for the fourth installment in “The Matrix” series dropped on Tuesday, along with a landing page framed around the iconic ‘red pill/blue pill’ choice posed to Neo in the first movie that gives viewers two different trailers to choose from. (Both are included below.)

Directed by Lana Wachowski, “The Matrix Resurrections” sees Reeves return as Neo, a one-time computer hacker turned savior of mankind who fought to liberate humanity from a race of sentient robot overlords who’d turned human beings into little more than batteries to power their AI empire. How did they manage to do that? By plugging everyone into a vast virtual reality world called ‘The Matrix.’ Given that we’ll be returning to the Matrix, it doesn’t look like the fight is over. Not yet anyway.

Based on the teaser, it also appears that Neo will be spending at least part of the film popping blue pills and willingly living in the dream world that he spent the last three movies trying to destroy.

The trailer also suggests that we’ll get a lot of visually stunning cyberpunk-meets-noir moments — there are smash cuts of resistance hovercraft floating over the hellscape of earth, and a brief glimpse of Neo as he walks through the rain down an empty street inside the Matrix.

There’s also sure to be some decent action, with some martial arts and at least one gun fight, though how much of either still remains unclear.

In 1999’s “The Matrix,” Neo was a character who’d use any weapon — and lots of guns — as well as his feet, fists, a train, a helicopter, to take the fight to the machines.

But beginning with the 2003 sequel, “The Matrix: Reloaded,” the movies began to move away from gun-heavy fight scenes. This trend continued that same year with the release of “The Matrix: Revolutions.” By the end of the third film, the series had all but given up on well-choreographed shootouts in favor CGI-heavy brawls, and based on the trailer we’re going to get at least one martial arts heavy melee.

With all that in mind, the fact that our protagonist doesn’t once pick up a firearm in the teaser gives me pause. And here’s why: After three “John Wick” movies, and a fourth in the works, you’d be hard-pressed to find an actor as capable and confident with a weapon, or two, or three, as Reeves.

In preparation for his role as the titular hitman, Reeves spent months running three-gun shooting drills as he worked on weapons handling, speed reloading, and combat shooting, until he was able to convincingly play the world’s deadliest super assassin.

For “John Wick: Chapter 3 – Parabellum” Reeves trained for more than six months to prepare for the role, as Taran Butler explained to Task & Purpose back in June 2019. Butler is a professional three-gun-shooter who worked on the last two Wick flicks and provided firearms training to the actors. Three-gun shooting involves target firing and rapid transitions between a pistol, shotgun, and rifle on a timed course. And if you want to see a hyper-stylized version of that in practice, watch either of the last two “John Wick” movies.

Training to play John Wick involved live-fire shooting on a three gun course and while it may seem like a no brainer, having actors shoot with live rounds played an outsized role in the level of realism seen on screen.

“The reason why we train a lot with live ammo is because in a lot of movies you’ll see that the actor is not lined up with the sights of the gun” Butler explained.

Makes sense, right? If you spend all your time on the range firing blanks, or just shooting at fuck all, there’s no real incentive to actually learn the fundamentals, and even less of a reason to try to improve. But if you actually train them, put the cast through the paces, and push them to beat their personal best, they’re going to get better and it’ll show through on screen.

“You shoot with live ammo because they will naturally become a good shooter, and will naturally line the sights up at the bad guys, where it’s not aiming super low,” Butler said. “To make Keanu good, he just has to be good. He has to be real.”

Now, the result of all that range time is that you end up with an actor who can actually shoot — and in Reeve’s case, fight hand-to-hand, on a motorcycle, and horseback — rather than one who just pretends to.

That’s no small accomplishment for a guy who for years was best known for looking confused and saying “whoa” a lot.

And it’d be a real shame if all that hard work and hard-earned skill wasn’t showcased on screen when Neo returns to battle the machines. Plus, it’s not like it’d be that difficult to fit into the series’ lore: Just have Neo plug himself into the training simulator, upload a crash course in three-gun-shooting, and then ‘boom’ he knows Kung Fu, and how to shoot.