The Marine Corps' Okinawa-based expeditionary unit has changed its logo from a bald eagle over an anchor to a dragon... 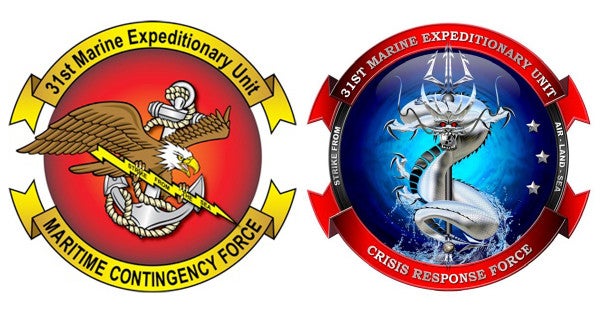 The Marine Corps' Okinawa-based expeditionary unit has changed its logo from a bald eagle over an anchor to a dragon emerging from water to chow down on an enemy's skull.

The 31st Marine Expeditionary Unit unveiled its new insignia on Oct. 26 — designed by Pfc. Luis Marcial and Lance Cpl. Alexis Betances — who were commended for their creativity by the unit's commanding officer, Col. Robert Brodie.

The “design symbolizes strength and power that instills confidence in our allies and partners while striking fear in our enemy’s hearts,” Brodie said in a statement.

Admittedly, when I got the press release from the MEU, I thought it was a joke. Even an unnamed Task & Purpose staffer was incredulous, writing, “what in the name of God is this?”

Well, that is a fantastic question!

According to the press release, the sea dragon “pays homage” to the Corps' Asian partners, while the trident illustrates the MEU's amphibious nature. And best of all, the “skull tucked inside the dragon's mouth reinforces Defense Secretary James Mattis' focus on lethality.”

Meanwhile, according to people with 20/20 vision, the sea dragon looks like a four-clawed half fish thing that was born prematurely, while the trident illustrates the MEU's roots fighting alongside the army of Neptune in the battle against taste. The skull reinforces the graphic designer offering the MEU's public affairs shop a reason to suck up to Mattis and mention “lethality.”

At this point, we're probably only a couple of steps away from the Marine Corps changing its Eagle, Globe, and Anchor insignia to something similar to Terminal Lance's machine gun through the skull with EGA eyes giving birth to baby Jesus tattoo idea.