Three Afghans were killed when a Taliban Black Hawk helicopter crashed in Kabul. 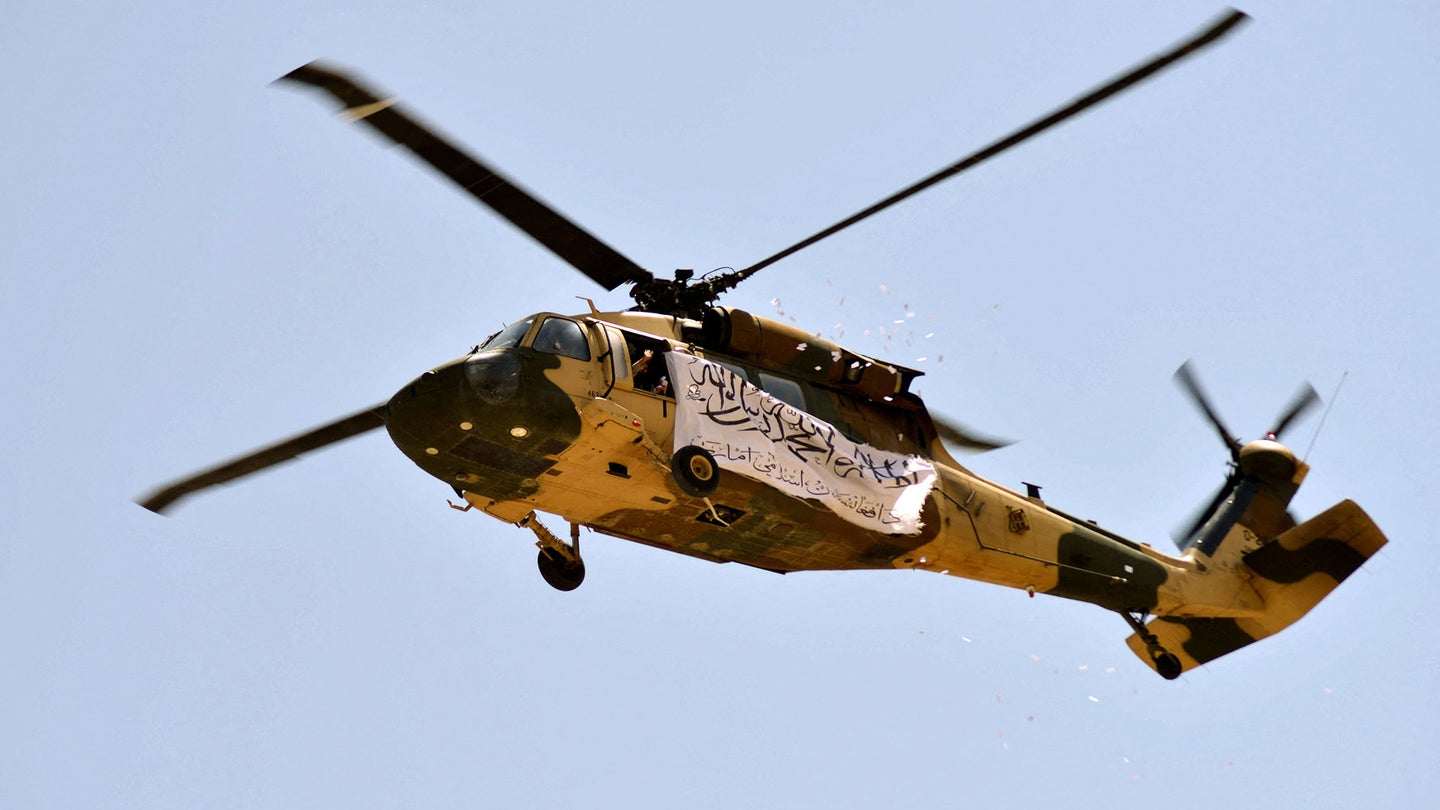 A helicopter displaying a Taliban flag flies above Taliban supporters gathered to celebrate the US withdrawal of all its troops out of Afghanistan, in Kandahar on Sept. 1, 2021 following the Taliban's military takeover of the country. (Javed Tanveer/AFP/Getty Images).
SHARE

The Taliban have lost one of their few operational UH 60 Black Hawk helicopters, which they captured last year when the now defunct Afghan Air Force, underscoring the training and maintenance challenges that the new Taliban air force is contending with, a Navy pilot told Task & Purpose.

The American-made Black Hawk helicopter crashed on Saturday during a training flight over Kabul, Taliban ministry of defense spokesman Enaytullah Khowrazmi told Reuters. Three Afghans were killed and another five were injured in the crash, which Taliban officials are attributing to a “technical problem,” Khowrazmi said.

It is not known how many of the Black Hawks that the Taliban captured last year are still able to fly. Four UH 60s flew as part of a parade held by the Taliban on Aug. 31 to mark the first anniversary of their victory over the former Islamic Republic of Afghanistan.

In late 2016, Connecticut’s Congressional delegation successfully got the Pentagon to start providing Afghans with UH-60 Black Hawks – which, coincidentally, are built in Connecticut – to replace the Russian-made Mi-17 helicopters that the Afghan Air Force had been using.

This move proved to be disastrous for Afghanistan’s former military. Not only were the Black Hawks unable to fly as high as the Mi-17s and operate in mountainous parts of Afghanistan, but UH-60s are much more difficult to maintain than the Russian helicopters that the Afghans had flown for years.

As a result, the Afghan Air Force was completely dependent on civilian contractors to keep their fleet of Black Hawks flying, and those contractors began leaving Afghanistan in 2021 as part of the U.S. military’s withdrawal from the country.

Roughly six weeks before the Taliban captured Kabul, Afghanistan’s former air force had 33 UH-60s, according to a June 30 report from the Special Inspector General for Afghanistan Reconstruction. The Pentagon vowed on July 12, 2021 to provide the Afghans with another 37 Black Hawks, but the Afghan Air Force began collapsing soon afterward.

The Taliban ultimately captured more than $7 billion in military equipment that the United States had provided Afghanistan, including more than $923 million worth of military aircraft, some of which U.S. troops rendered inoperable before the final withdrawal, according to a June 30 report from the Pentagon’s lead inspector general for Operation Enduring Sentinel and Operation Freedom’s Sentinel.

A group of more than 200 Afghan pilots, maintainers, security forces, and family members managed to fly into neighboring Uzbekistan and Tajikistan to escape the Taliban, including 11 pilots who flew Black Hawks to safety, according to Reuters, which remains in contact with other pilots who remain hiding in Afghanistan.

Since its victory last summer, the Taliban have used their newly acquired fleet of helicopters in parades and other shows of force as well as to deliver aid to parts of Afghanistan struck by floods, and to support Taliban fighters who are still battling the National Resistance Front in the Panjshir Valley, said Jonathan Schroden, an Afghanistan expert with CNA, a nonprofit research and analysis organization in Arlington, Virginia.

But so little information coming out of the fighting in the Panjshir Valley is reliable that it’s hard to tell exactly how the Taliban are using their helicopters to support operations there, Schroden told Task & Purpose.

It is also not known how many former Afghan Air Force pilots joined the Taliban and are now flying helicopters or planes for them, Schroden said.

The Taliban currently face a shortage of both skilled Black Hawk pilots as well as trained maintainers, McCain told Task & Purpose. That means the Taliban will not be able to keep flying their Black Hawks indefinitely, he said.

“However they’re getting them into the air, I can guarantee you it’s not safe,” said McCain, who still flies MH-60S helicopters for the Navy.

In the case of Saturday’s Black Hawk crash, it appears the Afghan pilot lost control of his aircraft as a result of a problem with the helicopter’s tail rotor, McCain said.

“There are very few circumstances in which a helicopter becomes entirely uncontrollable, and I highly doubt that was what was happening,” McCain said. “The pilot was unable to recover with any level of skill; so, whoever was at the controls was obviously not one of the more senior pilots and did not know what they were doing enough to keep them from auguring into the ground.”

Of the Afghan Black Hawk pilots who were not rescued, many have been coerced to keep flying for the Taliban, said McCain, who added he only knows of one Black Hack pilot who willingly joined the enemy: Mohammad Idris Momand.

Initially, Momand was named on Twitter as one of the Afghan pilots who was killed in the crash, but McCain said he has since learned that Momand was not in that helicopter.

McCain said he certified Momand as a capable aircraft commander, only to learn last year that Momand had stolen his UH-60 Black Hawk during the evacuation from Kabul, covered up the aircraft so it could not be seen from the air or on the ground, waited until the last U.S. troops left Afghanistan, and then flew his helicopter to Taliban lines.

“I feel partially responsible for what happened, but he actively deceived the people that he had promised to die fighting alongside; he robbed the Afghan Air Force of a flyable asset at a time of great need; and he willingly joined the Taliban in contravention of everything we had trained him and paid him to do,” McCain said.