Even in death, the F-35 continues to serve. 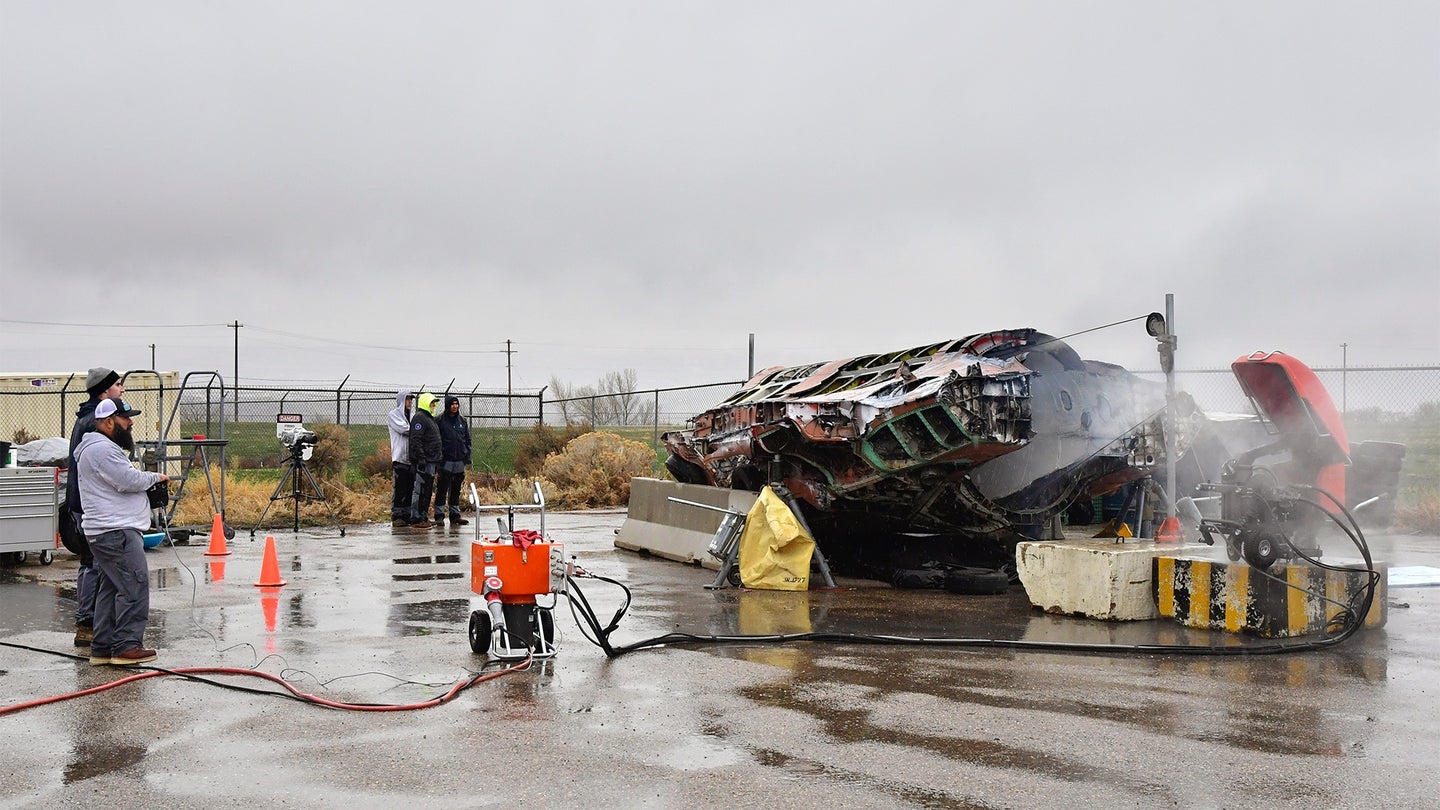 A salvaged F-35A is cut in half with the volunteer help of a civilian saw manufacturing company March 31, 2022, at Hill Air Force Base, Utah. The aircraft was condemned after an accident and is currently being transformed into sectional training aids by the 372nd Training Squadron, Det. 3, for use during instruction of F-35 maintainers. (Todd Cromar/U.S. Air Force).
SHARE

At Hill Air Force Base in Utah, there are two F-35s that airmen are working to refurbish into training aids. Both aircraft were involved in accidents in the past several years, and both were condemned to the scrap yard. But after several years — this is the F-35, afterall, and nothing is going to move with a quickness — there’s enough left over to create a set of training aids for all the maintainers who keep the remainder of the fleet of the country’s most expensive airframe working.

“After receiving the F-35A jet last year, the aircraft has been decontaminated and made safe, as well as the engine removed,” said Master Sgt. Andrew Wilkow of the 372nd Training Squadron, which is overseeing the project. “We found that except for the nose section, nearly all the components and systems inside the F-35A fuselage were in surprisingly good condition and ideal for usability as training aids.”

The second airframe was an F-35B model, courtesy of the Marine Corps, which means that, yes, Marines can find a second life in the Air Force.

All that was left from that model was the nose section, and even then, it was missing several exterior panels. Those parts along with a new canopy, had to be fabricated from scratch.

The F-35A Lightning II was involved in a May 2020 crash at Eglin Air Force Base in Florida. During a landing mishap, the pilot ejected, but the aircraft rolled over and caught fire on the runway, becoming a total loss.

The interim two years have involved, “removing contaminants, cleaning up any fluid or chemical residue, trimming off exposed burnt composites, and removing sharp edges or metal damage,” as Tech. Sgt. Kevin Browning of the 388th Maintenance Squadron said in a 2021 Air Force release, and then chopping up what was left of the fuselage of the F-35A Lightning II into salvageable sections.

Once the two zombie F-35s are mounted on stands, they’ll serve as realistic training aids, where maintenance personnel can train on mounting and removing all the myriad of component parts that make these aircraft, which cost between $94 and $101 million each, fly.

“I believe creating training aids from salvage aircraft, which the Air Force already owns and were destined to be scrapped, benefits everyone involved and the Air Force as a whole,” Wilkow said in an Air Force press release.

Of course, there’s a long history of not letting anything go to waste when it comes to military aircraft. The massive “boneyard” at Davis-Monthan Air Force Base in Arizona is a one-stop-shop for finding parts and airframes that can be repurposed so they can live on. And back during World War II, there were the “assembly ships” of the 8th Air Force — bombers that had been run too ragged to keep flying over Germany, but were decorated in the gaudiest paint schemes imaginable to serve as visual aids in the days before radar direction.

It’s hard to discuss the F-35 without mentioning its seemingly endless setbacks. That’s to be expected, though, when the total projected cost — including development and future operations over the next 60 years — now sits around $1.7 trillion, and it is still periodically dealing with unresolved design flaws. And a 25mm gun that can’t shoot straight. And a problematic flight control system.

But, even in a post-mortem state, these aircraft can be as valuable as ever in teaching airmen on a task that is not going to go away — repairing the F-35s.