Denzel Washington is the US Army’s newest (honorary) sergeant major

"He just wants to do better for the Army.” 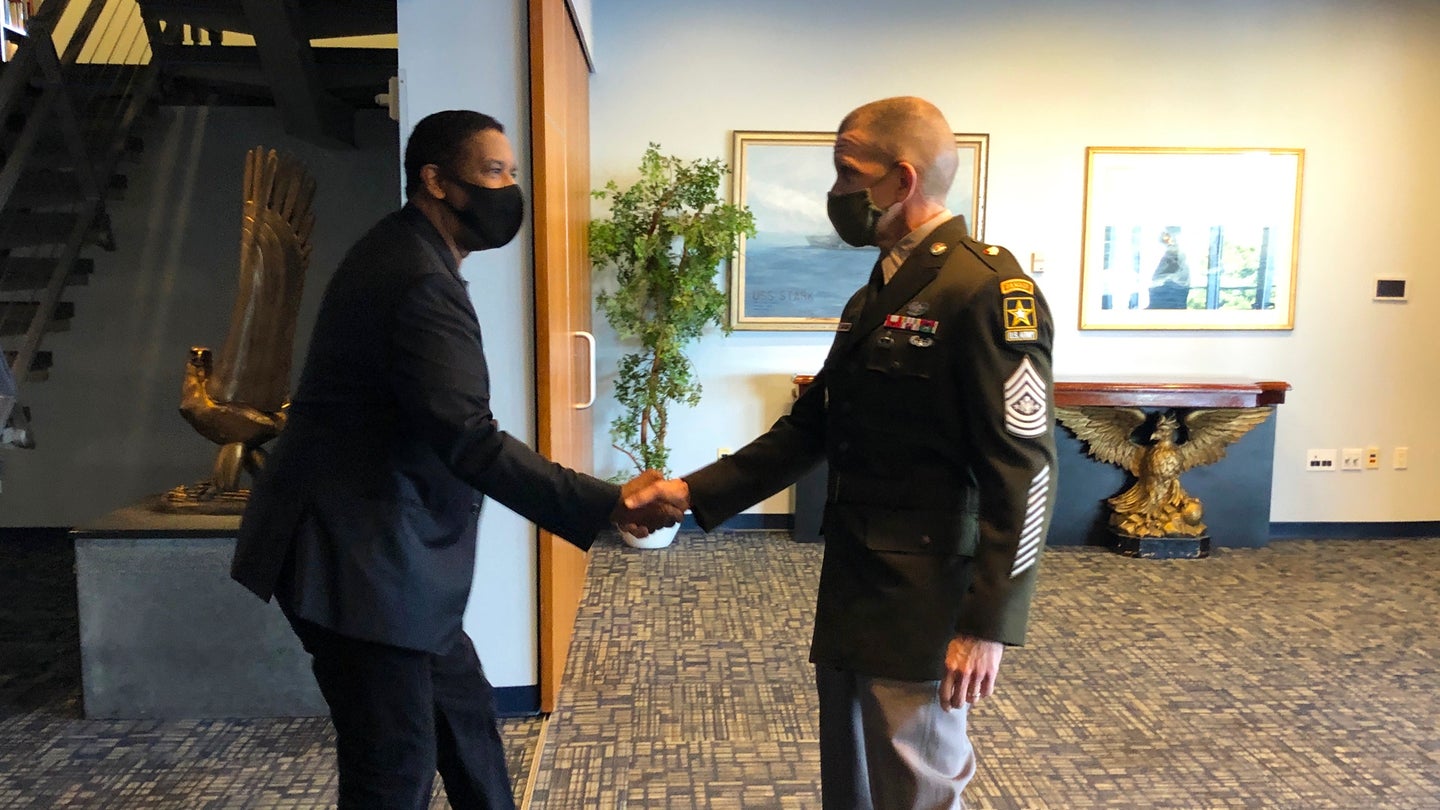 Actor, director and Hollywood icon Denzel Washington is the “Honorary Sergeant Major of the Army” for 2021.

“We all are free because of the sacrifices that you’ve made,” Washington said of U.S. military service members at a small ceremony on Sept. 24 in New York City. “We all have the right to agree or disagree or complain or whine or whatever else Americans do these days because of the sacrifices that each and every one of you men and women made. This really belongs to you.”

The Army formally announced Washington as the 2021 Honorary Sergeant Major of the Army recipient at the Annual Association of the U.S. Army conference on Monday. Washington was chosen because of his work with the Fisher House Foundation, a program focused on building homes at military medical centers around the world for military and veteran families to stay in while their loved one is receiving medical care.

Sgt. Maj. of the Army Michael Grinston, who presented the award to Washington, said that Washington represented everything he was looking for in this year’s honoree: humility, dedication to soldiers, and respect for the Army.

“When I looked at him, and when I looked at the role of the sergeant major of the Army, we want those that are humble because we serve the soldiers of the United States of America, and I represent all the soldiers in the Army,” Grinston said. “And when I talk to him, that’s what he represents … He just wants to do better for the Army.”

Ken Fisher, the chairman and CEO of the Fisher House Foundation, first met Washington about 20 years ago while the actor was visiting Brooke Army Medical Center in San Antonio, Texas. Washington “wrote a check on the spot” to the foundation to help build a home, Fisher said. He’s since become a board member of the foundation. “Nobody deserves this more than you do,” Fisher told Washington during the ceremony. “You have been an amazing friend to military families throughout your work with us.”

Aside from his work with the foundation, Washington was also recognized for an upcoming movie he’s directing about an Army first sergeant who was killed in Iraq in 2006.

“A Journal for Jordan” tells the story of 1st Sgt. Charles Monroe King, a U.S. soldier who wrote a 200-page journal for his son, Jordan, while he was deployed to Iraq. The movie, which will be released later this year, is based on the memoir of the same name written by King’s fiancé, Dana Canedy, who was “determined to preserve his memory for their son.”

Just two months after finishing the journal, full of advice and thoughts for his son, King, portrayed by Michael B. Jordan in the upcoming film, was killed by a roadside bomb on Oct. 14, 2006. His son was just seven months old.

Canedy, who was also at Washington’s award ceremony, said afterward that she and Washington were “trying to honor” King through the film, but also “make it representative of the dignity and the patriotism of all of our soldiers.” Thinking back to her time staying at a Fisher House, when she was attending a memorial for King at Fort Hood, Texas, Canedy lauded the organization for sheltering and comforting her during “one of the most excruciating times of my entire life.”

“They’re doing God’s work, the Fisher family, the Fisher house, the Fisher Foundation,” Canedy said. “And our entire nation owes them a debt of gratitude because they really uplift and they support our military.”

The premise of the film — a soldier who writes down everything he wants his son to know just in case he doesn’t get the chance to tell him himself — is all too relatable for service members throughout the military, including Grinston.

“That could be me,” Grinston said. “I wrote 13 typed pages to my daughters before I deployed. It’s what we do as soldiers. You don’t know if you’re going to come back … You doing that movie is not a movie about a letter to Jordan, it’s about a letter to all our families. Every one of us — every soldier, sailor, airman, and Marine — that could have been us.”

Washington is the second civilian recognized with the honorary sergeant major award, following Elaine Rogers, the CEO of USO Metropolitan Washington-Baltimore, who received the award in 2018. Other recipients include retired Army generals such as Gen. Frederick Krosen, the former Army vice chief of staff, and Army Ranger Hall of Fame recipient Lt. Gen. David Grange, Jr.

Grinston said that Washington was uniquely qualified for this year’s award, due to the actor’s humility and selflessness during a previous meeting in the Pentagon. Washington’s “behind-the-scenes work” in support of soldiers and military families “really embodies what it means … when we pick an honorary sergeant major of the Army.”

“Mr. Washington, by accepting this honor, you get to be part of the club that is one percent of the one percent, and by doing that movie, not only do you represent Jordan, you represent the entire family of the Army,” Grinston said in September. “And when I see that, that’s what it means to me. And I couldn’t be more proud to say you are now going to be a part of our team.”

Washington said in his acceptance that while he’s received plenty of awards, “this is different,” and he vowed to “do everything in my power” to honor the men and women who serve in the U.S. military.