Soldiers are lighting themselves on fire for official training purposes

"The most challenging aspect of the training was overcoming the initial fear." 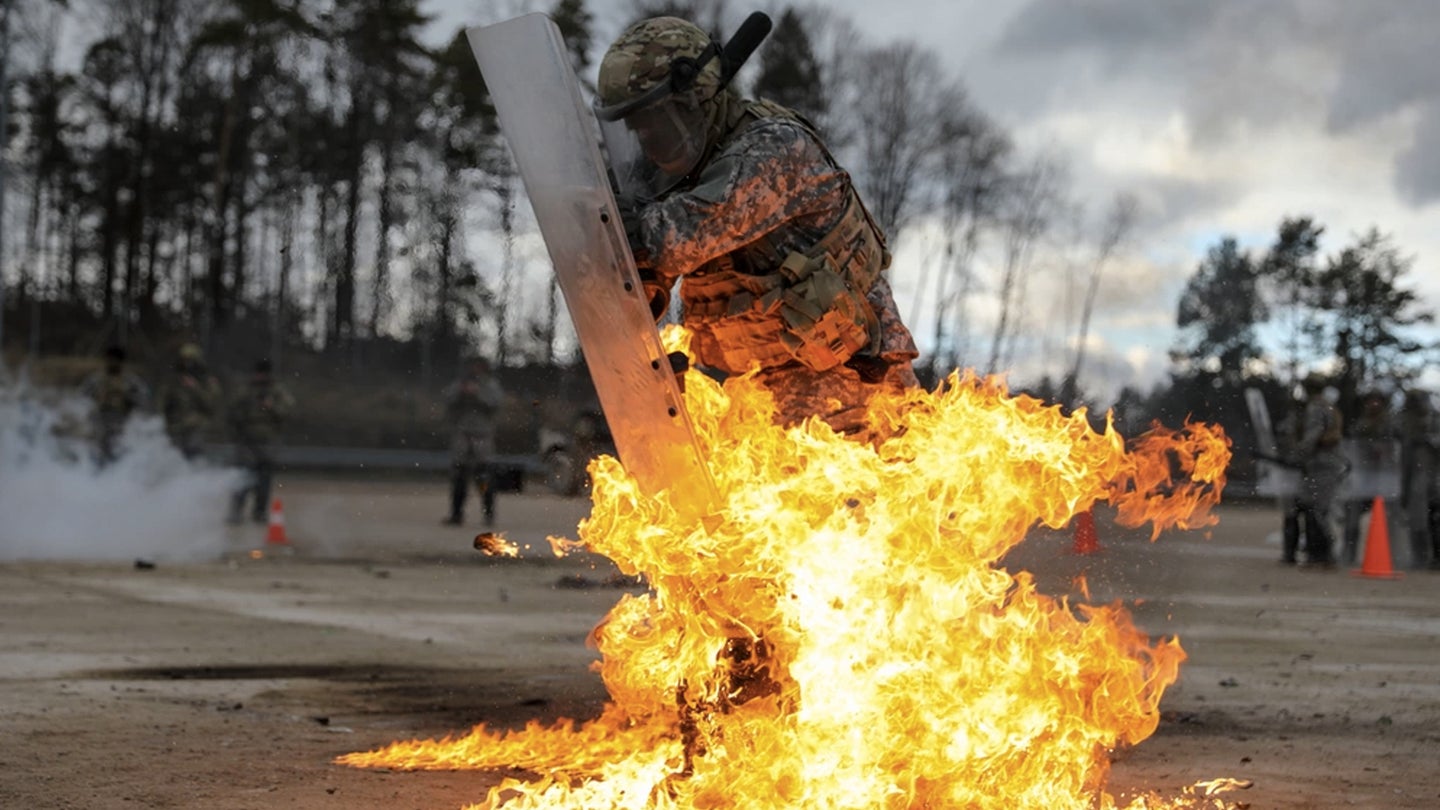 The military loves euphemisms like “removed from battlefield,” or “surgical strikes,” and how one campaign or another has “turned a corner.” But few of them are as perfect as “fire phobia training,” which is a harmless phrase for lighting yourself on fire.

At least, that’s what happened on Friday in Hohenfels, Germany, where soldiers from the Kentucky National Guard practiced getting Molotov cocktails thrown at them.

“The purpose of the training is to help better prepare our soldiers in the event that any type of flammable material is deployed against us in a crowd control setting,” said Sgt. Matthew Joseph, an infantryman assigned to the Kentucky National Guard’s 1st Battalion, 149th Infantry Regiment in a recent press release.

In other words, the training was meant to get troops ready for when rioters throw burning stuff in their faces. Soldiers from Slovenia taught the guardsmen what to do in that situation.

“The most challenging aspect of the training was overcoming the initial fear,” but the Slovenian trainers were helpful in mitigating that fear, Joseph said. The key, he said, is trusting your gear.

“Being able to realize that you have gear and equipment that can help sustain you from those types of threats and learning how to use it properly, along with the techniques that the Slovenians taught us, was valuable,” he said.

A fellow soldier, Spc. Daniel Sparks, echoed Joseph’s view and shared some advice that sounds like it was written by a company first sergeant: “Your equipment works and you do what they tell you and everything turns out right.”

The press release did not share specific details on how the gear is Molotov-proof, or what to do when there’s a burning object flying towards you. But “fire phobia” training is nothing new. A 2013 video by Army Sgt. Joshua Stoffregen shows Portuguese soldiers throwing Molotov cocktails on the ground and teaching Italian and Polish soldiers how to high-step through it. As long as they kept their feet moving high and fast, the troops seemed to come through it all right, though perhaps a little rattled.

“You feel fire in all of your body,” said one soldier in the video, though it was not clear which nation he was from. “In your legs, in your arms, in your face, everywhere it’s fire, you feel hot.”

Soldiers from the North Carolina National Guard, the South Carolina National Guard and other units have also undergone fire phobia training over the past 10 years or so. All the National Guard units that have taken part might make one think that the guardsmen were preparing to face flaming riots back home. But although the Molotov cocktail today is often used by street protesters around the world, it began as a weapon of war. Fascist Spanish troops used them against their Soviet backed-foes in the Spanish Civil War between 1936 and 1939, but it wasn’t until World War II that the improvised incendiary earned its famous name.

Oddly enough, the name for the burning weapon originated in the Winter War: the war between the Soviet Union and Finland when the former country invaded the latter in November, 1939. Soviet planes began bombing Finland, but the Soviet Union’s minister of foreign affairs, Vyachislav Molotov, claimed that they were dropping humanitarian supplies as the Red Army attempted to liberate the Finnish people.

“The Finnish soldiers’ response to the lies was one of sardonic black humor,” wrote historian William Trotter in an article about the Molotov Cocktail. “Soviet bombs were thereafter referred to as ‘Molotov’s Picnic Baskets’, and what more appropriate way to greet those masses of ‘liberating’  tanks than with a Molotov cocktail?”

At least, that’s how the legend goes. However, the explosion of the cocktail was insignificant against the armored side of a tank. What really made the weapon effective was if it was thrown right at the portal or chamber where the tank drew in fresh air from the outside to replace the “stale, noxious air inside the crew’s compartment,” he added.

“That was the bull’s eye that every tank-hunting team aimed for with their petrol bombs,” Trotter explained. “If a sufficient amount of flaming gasoline got sucked into the turret, there was a good chance it would ignite one or more rounds of ready ammo, which was usually stored in a rack near the main gun’s breech. When that happened, the result was gruesome.”

Of course, even if the flames of the cocktail did not enter the tank, the smoke and fumes could still blind the tankers. Either way, it was a fearsome weapon that claimed scores of the invading machines. Over the course of 115 days, 87 women and five men at the Finnish State Liquor Factory cranked out 542,194 Molotov cocktails which were credited with destroying about 350 Soviet tanks or other vehicles, Trotter wrote.

Now in 2022, nearly 90 years after they were first reportedly used in Spain, the Molotov cocktail still strikes fear in the hearts of anyone facing them.

Until they go through “fire phobia” training.