Authorities put up $40,000 reward for information on fugitive ‘Fat Leonard’

The corrupt contractor is believed to have fled the county after slipping out of house arrest. 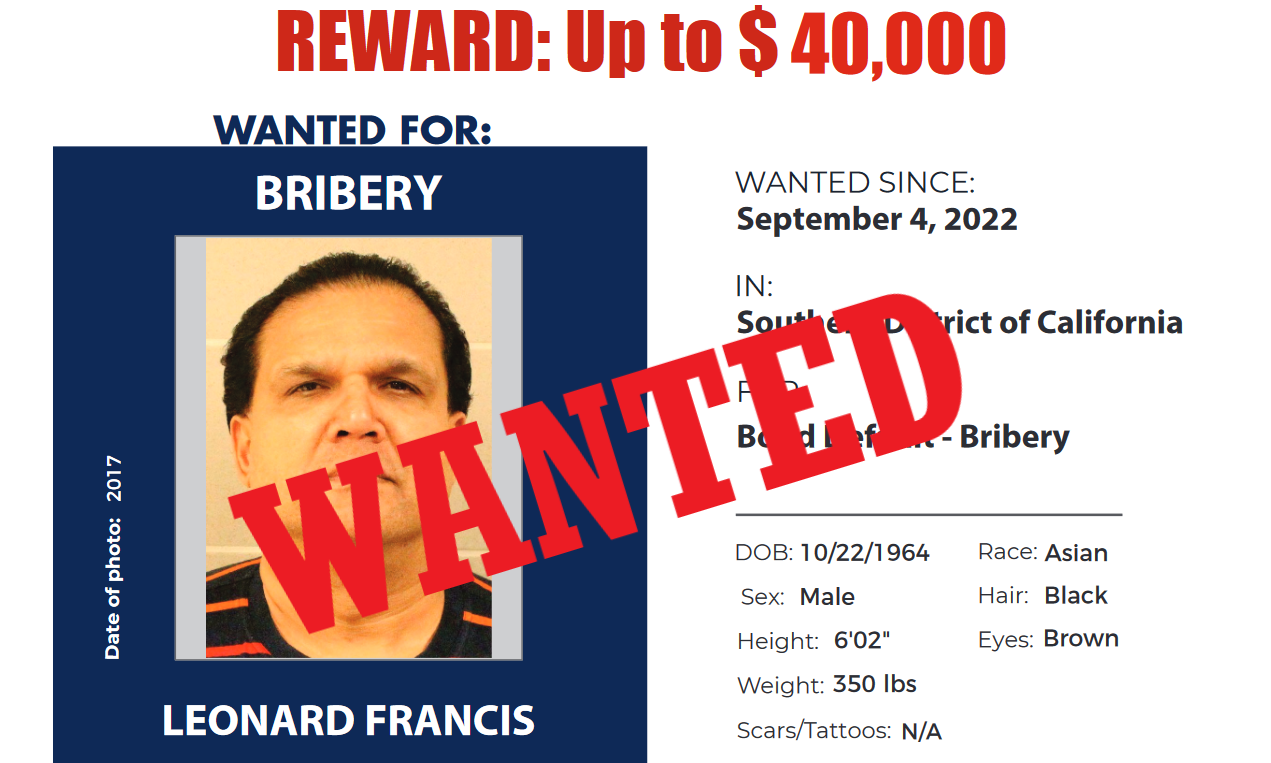 The saga of Fat Leonard now involves a bounty. If you have “information directly assisting in the apprehension” of the wanted fugitive, you could get up to $40,000 in combined rewards.

Leonard Glenn Francis, better known as the “Fat Leonard” behind the scandal, somehow managed to slip house arrest and go on the lam last week, with authorities not arriving at his home for hours. The former military contractor, who pleaded guilty to charges of conspiracy and bribery is now out of the country. The corrupt contractor showered officers from the Navy’s 7th Fleet with alcohol and other gifts, as well as prostitutes, during a years-long effort where his company, Glenn Defense Marine Asia, overcharged the United States $35 million for his services. Those officers, who received as much as $500,000 in bribes, in turn gave him classified information, specifically where U.S. Navy ships would make port in the Pacific Ocean.

According to the United States Marshals Service, Francis cut off his ankle monitor the morning of Sept. 4. U.S. Pretrial Services were alerted to something being done to the monitor, but it wasn’t until seven hours later that day — after calls to his defense attorney — that the San Diego Police Department arrived at Francis’ home and found him missing. The Marshals, who are leading the search for Francis, do not have any indication where he is. So now they’ve sent out wanted posters of the “major fugitive.”

The Marshals Service is providing $20,000 of the reward fee. The Naval Criminal Investigative Service (NCIS) is funding the other half of the reward money. The $40,000 reward is only 0.114 percent of the $35 million in bribes and other fees exchanged in the scandal.

Francis was originally arrested in 2013, and pleaded guilty to bribery in 2015. When he fled this week, he was only a few weeks from his sentencing in the case. He faced as much as 25 years in prison for his part in the corruption scandal. Five Navy officers have been convicted for their roles in the case. Francis is among 29 others who gave guilty pleas, but now he’s a major fugitive after skipping out on the sentencing and becoming a fugitive.

Supervisory Deputy U.S. Marshal Omar Castillo told the San Diego Tribune, which broke the story, that the escape was clearly planned in advance. The Tribune, in a follow-up piece, reports that Marshals say Francis fled the United States. It’s unclear what resources he has access to while evading authorities, but statements made in a podcast he recorded while under house arrest suggest he has hidden assets and money — presumably more than $40,000 — that can help him avoid capture.

Is that reward money far lower than the funds and bribes Francis and others in the scandal traded in? Absolutely. But if anyone has information that could lead to Francis’ capture, authorities ask that you call the U.S. Marshals at 877-926-8332 or submit a tip at their website (it can be done anonymously).