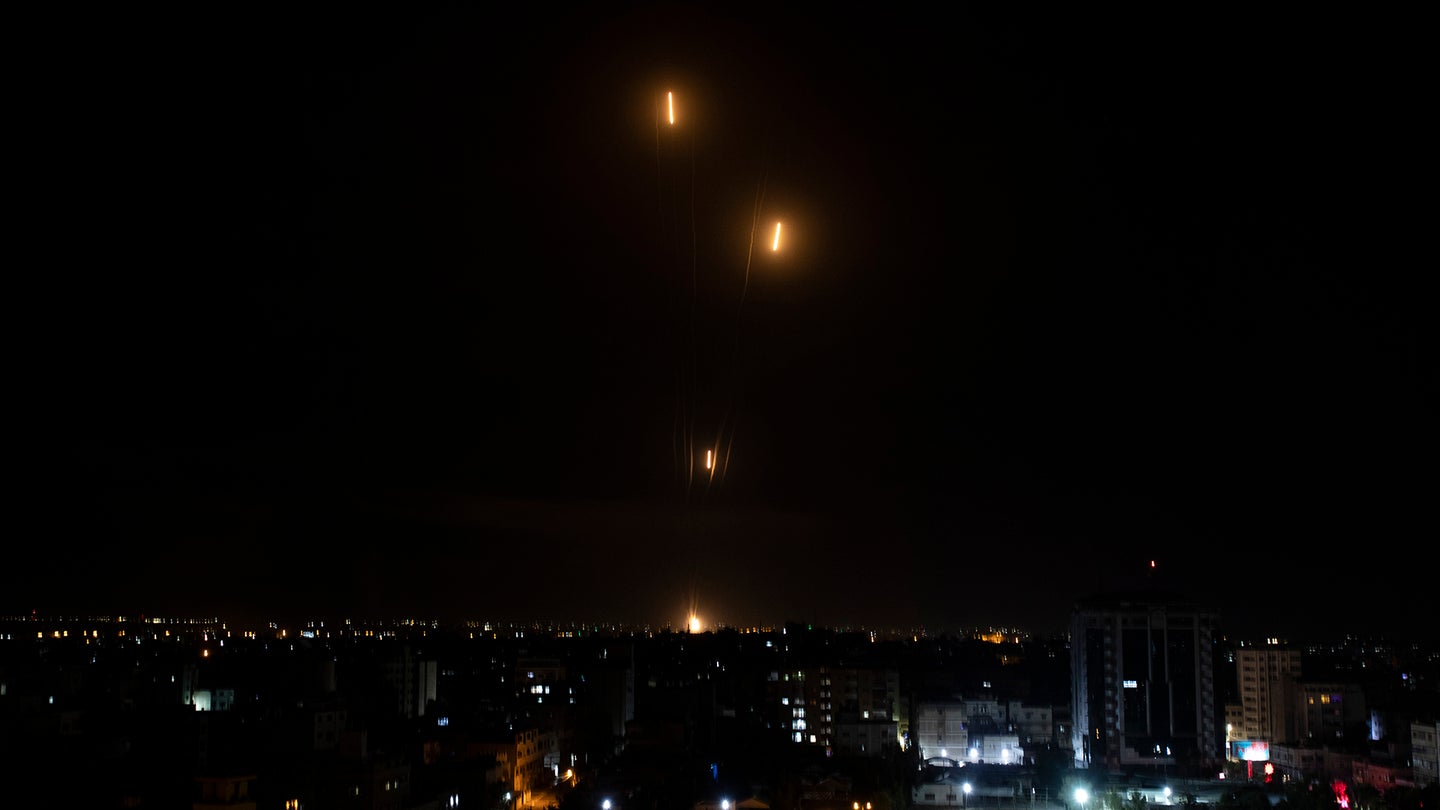 Rockets are launched from the Gaza Strip towards Israel, Tuesday, May. 11, 2021. The barrage of rockets from the Gaza Strip and airstrikes into the territory continued almost nonstop throughout the day, in what appeared to be some of the most intense fighting between Israel and Hamas since their 2014 war.(AP Photo/Khalil Hamra).
SHARE

Israel came under heavy rocket attack on Tuesday after Palestinian Islamic Jihad, which has been designated as a terrorist group by the State Department, vowed revenge for an Israeli attack earlier in the day that destroyed a 12-story building in Gaza.

Videos posted on social media showed fusillades of rockets streaming from Gaza toward Israeli cities, including Tel Aviv. The Israeli Defense Forces also posted a video of the U.S.-funded Iron Dome system destroying rockets before they could reach their targets.

Hamas was the first Palestinian terrorist group to fire rockets at Israel on Monday evening in retaliation for a confrontation over the weekend between Israeli police and Palestinian protesters at the Al Aqsa Mosque in Jerusalem.

Israel has responded by launching airstrikes on Gaza. As of Tuesday, Palestinian officials have reported 28 deaths since the most recent conflict began, according to the Wall Street Journal.

The Iron Dome was apparently not able to stop all of the rockets before they hit their targets.

“One of the 100s of rockets that were just fired from Gaza toward Tel Aviv and central Israel exploded on a civilian bus,” the IDF tweeted on Tuesday. “Hamas’ intentions are clear: kill Israeli civilians. We won’t stand by and let this happen.”

The Iron Dome is an advanced defense system for which the United States has provided both financial and technical assistance, which the Israelis have used since 2011 to shoot down incoming rockets.

If the Iron Dome determines that an incoming rocket is a threat, the system will fire a missile to destroy the projectile mid-air, similar to the U.S. Army’s Patriot surface-to-air missile system.

Videos on social media show the Iron Dome at work blasting incoming rockets out of the sky on Tuesday. A number of videos offer different vantage points, from both Gaza and Israel, and show bright red plumes in the sky, followed by quick flashes, and in some cases a delayed ‘boom’ depending on the distance.

Featured image: Rockets are launched from the Gaza Strip towards Israel, Tuesday, May. 11, 2021. The barrage of rockets from the Gaza Strip and airstrikes into the territory continued almost nonstop throughout the day, in what appeared to be some of the most intense fighting between Israel and Hamas since their 2014 war.(AP Photo/Khalil Hamra)