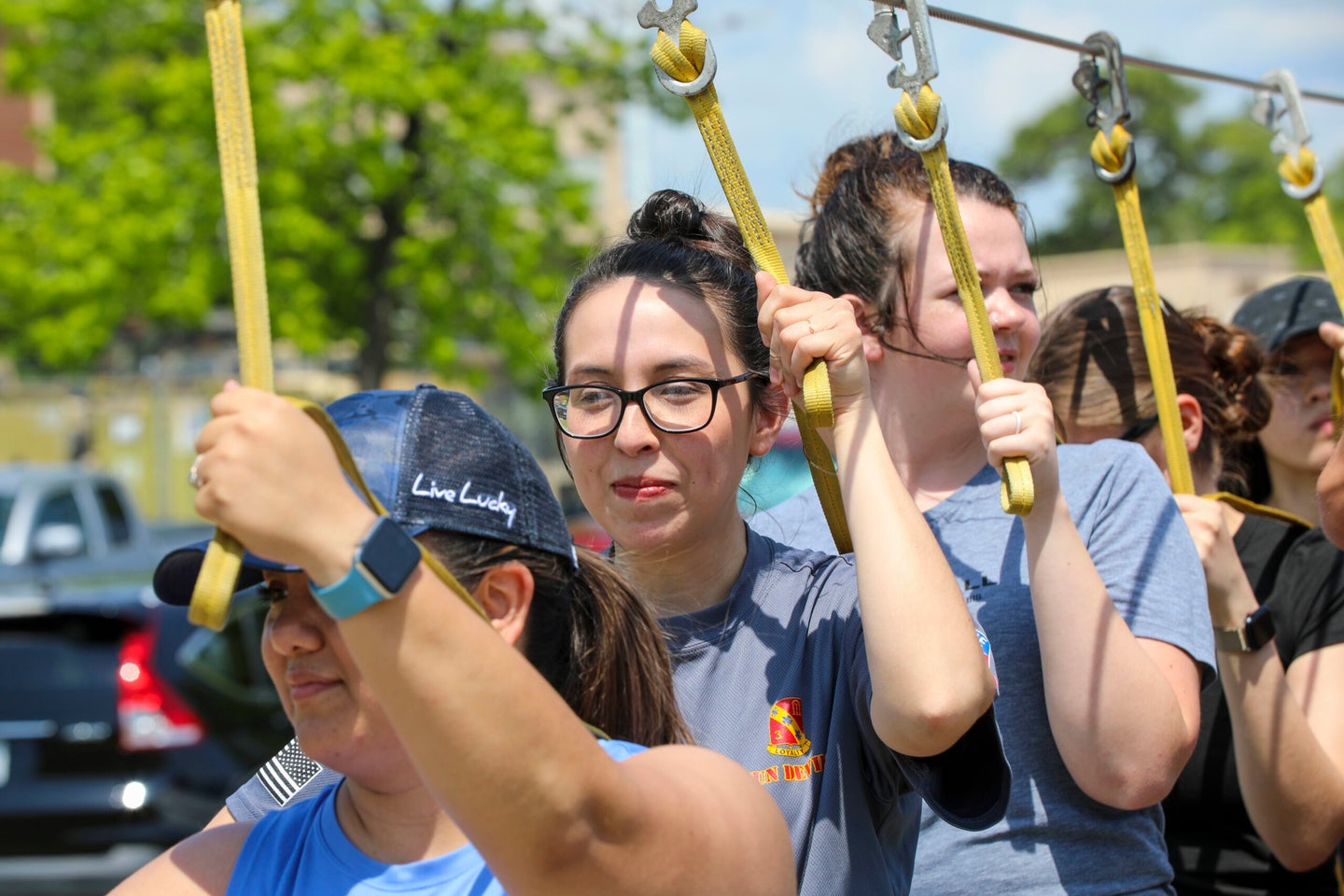 Military spouses who are a part of the 82nd Airborne Division participate in a "Be A Paratrooper For A Day" event at the United States Advanced Airborne School on Fort Bragg, N.C. on May 3, 2022. The spouses take part in a pre-jump demonstration, Meals Ready-to-Eat (MRE) eating contest, and jumping out of a 34-foot tower. (Pfc. Lilliana Fraser/U.S. Army).
SHARE

This formula for success simply isn’t working for thousands of military spouses. I have lived it myself and witnessed it in others for over 27 years. Without regret, my husband’s military career translated into our shared life purpose: a sense of duty and enormous pride in our country. There was also much sacrifice. Meeting my husband while I was in college led to a graduation delay of three additional years due to frequent moves. Seven years of full-time study at 4 different universities eventually culminated in a bachelor’s degree. Finally, I graduated with a 4.0 in Nursing and moved again just two weeks later. I maintained my nursing license over the years with a patchwork of full and part-time jobs, non-traditional work settings, and independent contractor gigs. I was able to keep a current license, but never able to advance into a management or leadership role. Despite my high-quality education and lofty career goals, I struggled to meet my potential. I barely hung on to my license. And I am not unique. Over the decades, I’ve watched my story play out over and over again with other military families.

Military spouses sacrifice personal goals in ways the general population would rather ignore. No other demographic experiences such high unemployment rates. Estimates range from 22 to 30% unemployment among military spouses, according to the U.S. Chamber of Commerce. compared to the general U.S. unemployment rate of about 4%. Causes range from frequent moves, difficulty transferring licensure to different states, and poor accessibility to jobs in specialty fields, while some entrepreneurial spouses struggle to qualify for small business loans because lenders view the fact that they have not established roots in the community as a cause for concern. Many highly educated spouses must accept local underemployment rather than pursue meaningful career options.

U.S. Military policies often exacerbate the problem. For example, Status of Forces Agreements (SOFA) governing spouse employment in foreign countries severely restrict career progression. These policies have remained unchanged since World War II, despite cultural and societal advancements in the modern workforce. Many military installations lack sufficient childcare services, which results in long waitlists. Military service members have no access to flexible spending accounts, (FSAs) resulting in higher net costs of childcare compared to their civilian counterparts, a problem exacerbated when military families are forced to find childcare providers off base. The dual-income family has become the norm in the U.S., yet our own policies inherently disadvantage the military family from achieving financial stability through dual careers. Future impacts of financial stress increase by an order of magnitude year after year because the military spouse is not able to contribute to retirement savings at levels comparable to their civilian counterparts. This results in the future retired military family’s finances being negatively impacted.

Can a service member effectively focus on the complicated task of national defense when their personal finances are suffering? Financial vulnerability in the military family should concern us all. I contend that lack of employment in the military spouse community disproportionately and negatively impacts military readiness.

Yes, meaningful employment translates to financial gain and stability, but there is another important incentive: mental health. Career success provides for increased mental health as stated in Military Spouse Magazine. Hiring our Heroes director Meredith Lozar concurs that unemployment is contributory to poor self-esteem, and a lack of focus. Good mental health of a family directly translates to increased retention of the service member. Retention of highly trained service members is a critical aspect of our national defense and a benefit to all Americans according to Military Medicine Magazine. It is a moral and ethical imperative to help our military families attain good mental health, and one highly effective method is through meaningful employment.

What solutions are available for this dilemma? Frequent communications with legislators through email, letters or phone calls make a big impact. Ask legislators to pass bills such as HB 1605 and S.1532 in order to create policies that encourage the DoD to study the military spouse life cycle with recommendations in mind, incentivize employers with tax breaks if a military spouse is hired, and allow military members to pay for childcare with pre-tax earnings similar to an FSA. Insist that legislators include spousal updates to SOF agreements when they come due for re-negotiation and offer portability through financial vesting policies for retirement accounts so spouses do not forfeit their future nest egg. Encourage legislators to create a special classification for SBA loans specific to military spouses. Refer to organizations such as Secure Families Initiative and Homefront Rising for coaching that maximizes one’s impact when interacting with legislators. These are all easily achievable actions.

Signing up for military service should not entail financial hardship for military families. The military family demonstrates the highest level of commitment, loyalty and dedication to protecting our country. Military spouses particularly deserve policies to restore opportunity in their chosen career paths in exchange for their resilience and direct support of our troops. Our entire country stands to benefit from this investment.