Navy intercepts more than 2,000 AK-47s from Iran in the Gulf of Oman 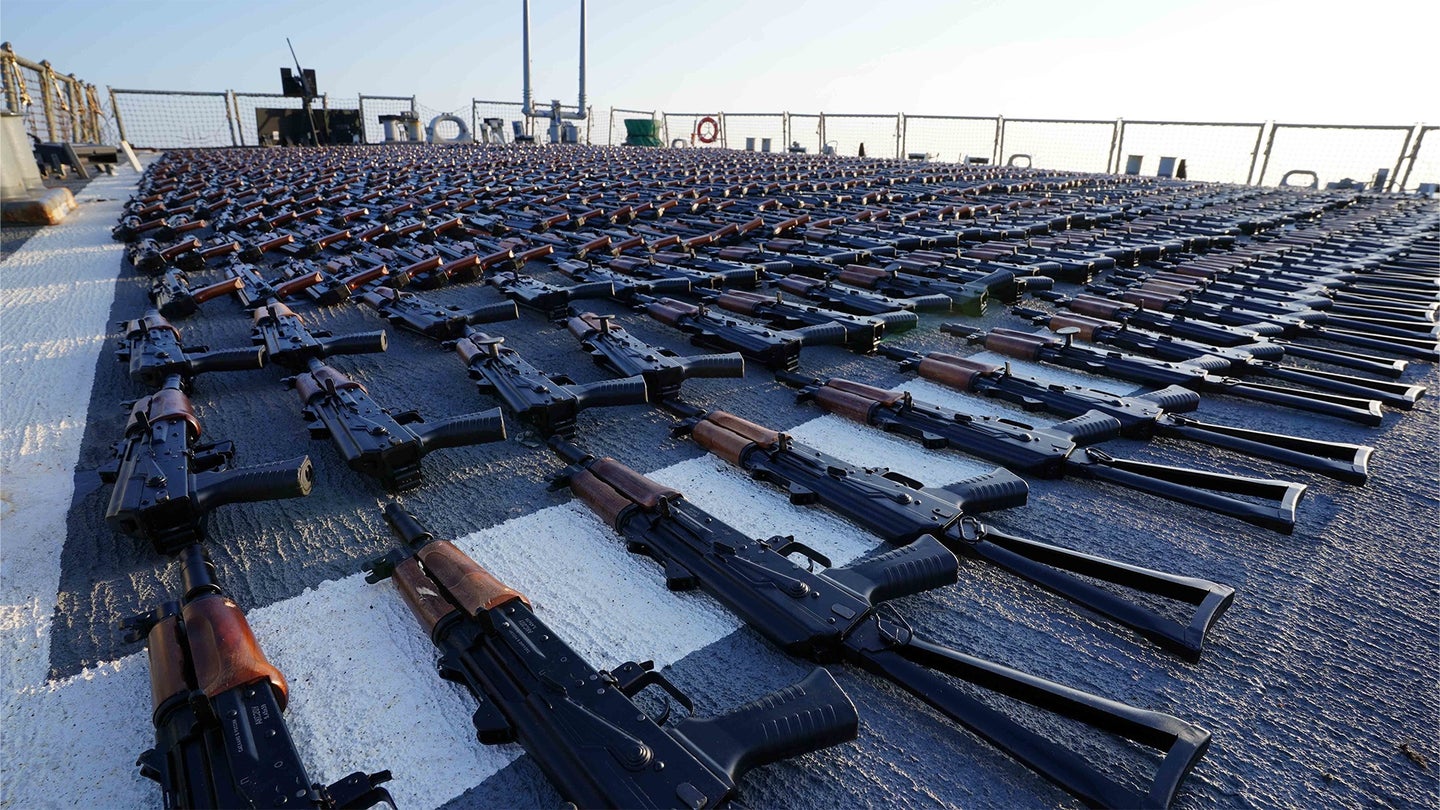 Thousands of AK-47 assault rifles sit on the flight deck of guided-missile destroyer USS The Sullivans (DDG 68) while being inventoried on Jan. 7, 2023. (U.S. Navy photo).
SHARE

The vessel, crewed by six Yemeni nationals, was sailing through the Gulf of Oman on Jan. 6 along a route frequently used to smuggle weapons and other cargo from Iran to Houthi rebels in Yemen when it was intercepted by the coastal patrol ship USS Chinook, according to a statement from U.S. Central Command. A boarding team from the USS Chinook, supported by the coastal patrol ship USS Monsoon and the guided-missile destroyer USS The Sullivans, searched the vessel and discovered 2,116 AK-47 assault rifles.

“The illegal flow of weapons from Iran through international waterways has a destabilizing effect on the region,” said Gen. Michael Kurilla, commander of U.S. Central Command, in Tuesday’s statement.

The more than 2,000 assault rifles are only the latest incident in the Navy’s ongoing mission patrolling the Gulf of Oman. In December 2022, Navy personnel from the expeditionary sea base USS Lewis B. Puller intercepted a fishing trawler carrying more than 50 tons of ammunition, fuses, and rocket propellent, totaling 1 million rounds of 7.62mm ammunition, 25,000 rounds of 12.7mm ammunition, nearly 7,000 proximity fuses for rockets and over 2,100 kilograms of propellant used to launch rocket-propelled grenades. And in November 2022, the USS The Sullivans and the U.S. Coast Guard cutter John Scheuerman intercepted a fishing boat carrying more than 170 tons of chemicals that can be used to make explosives.

Iran has long supported the Houthi rebels in Yemen, who have been engaged in a years-long conflict with the Saudi-backed Yemeni government that has left a devastating impact on the country, with 4 million Yemenis internally displaced and three out of four Yemenis in need of humanitarian assistance.

Vice Adm. Brad Cooper, commander of the Navy’s 5th Fleet and U.S. Naval Forces Central Command, said in a Navy release that “These threats have our attention. We remain vigilant in detecting any maritime activity that impedes freedom of navigation or compromises regional security.”