Want to know how to lose your job at a naval hospital? Post photos of yourself and a coworker flashing... 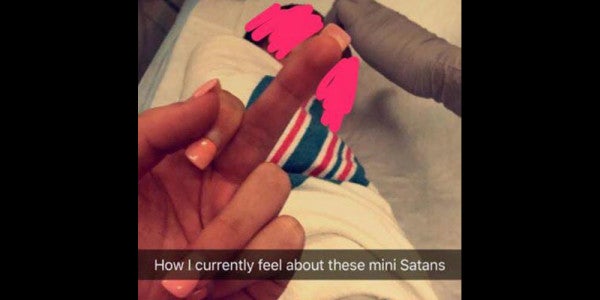 Want to know how to lose your job at a naval hospital? Post photos of yourself and a coworker flashing the finger at a newborn infant. If that’s not enough, you can call the fresh babies “mini Satans.” If you’re really gunning for that boot out the door, you can film yourself making an infant dance.

Or just do all of the above, like an undisclosed number of recently reassigned Navy corpsmen at Naval Hospital Jacksonville, Florida, decided to do. The photo and video were supplied to Action News Jax, a local Fox affiliate, after hospital staff shared them on Snapchat.

In a Sept. 19 Twitter post, Action News Jax’s Beth Rousseau posted the viral image, showing a Navy corpsman flipping off a newborn infant with the caption: “How I currently feel about these mini Satans.”

The video, which was also posted to Snapchat, said the “Navy nurse” and her friend made a baby dance to rap music — 50 Cent's In Da Club — according to the New York Daily News.

Jeanne Casey, a spokesperson for the naval hospital, said in a statement that the incident was “outrageous, incredibly unprofessional, and cannot be tolerated,” according to the Associated Press. Two corpsmen have been removed from patient care and the incident will be handled by the military justice system, reports Navy Times. Parents of the children involved are being notified, Associated Press reports.  Mobile phones are now banned from in patient care and the commanding officers of Navy hospitals have been instructed to call new or expecting mothers to address any concerns, Navy Times reports.

Of all the things people seem to have forgotten this year — like Nazis are bad, and don’t stare at the sun — this one seems, now, to be worth repeating: Don’t flip off, or inappropriately touch, a baby. Add it to 2017’s list of surprisingly not-so-common knowledge.

This article has been updated with new information clarifying that the two individuals involved were Navy corpsmen. (Updated 9/21/17, 6:59 a.m. EST).