‘Mosul’ is the best Iraq War film ever made

"The opening shots sent chills through my spine, panning over street after street of destroyed homes, downed power lines, and wrecked vehicles." 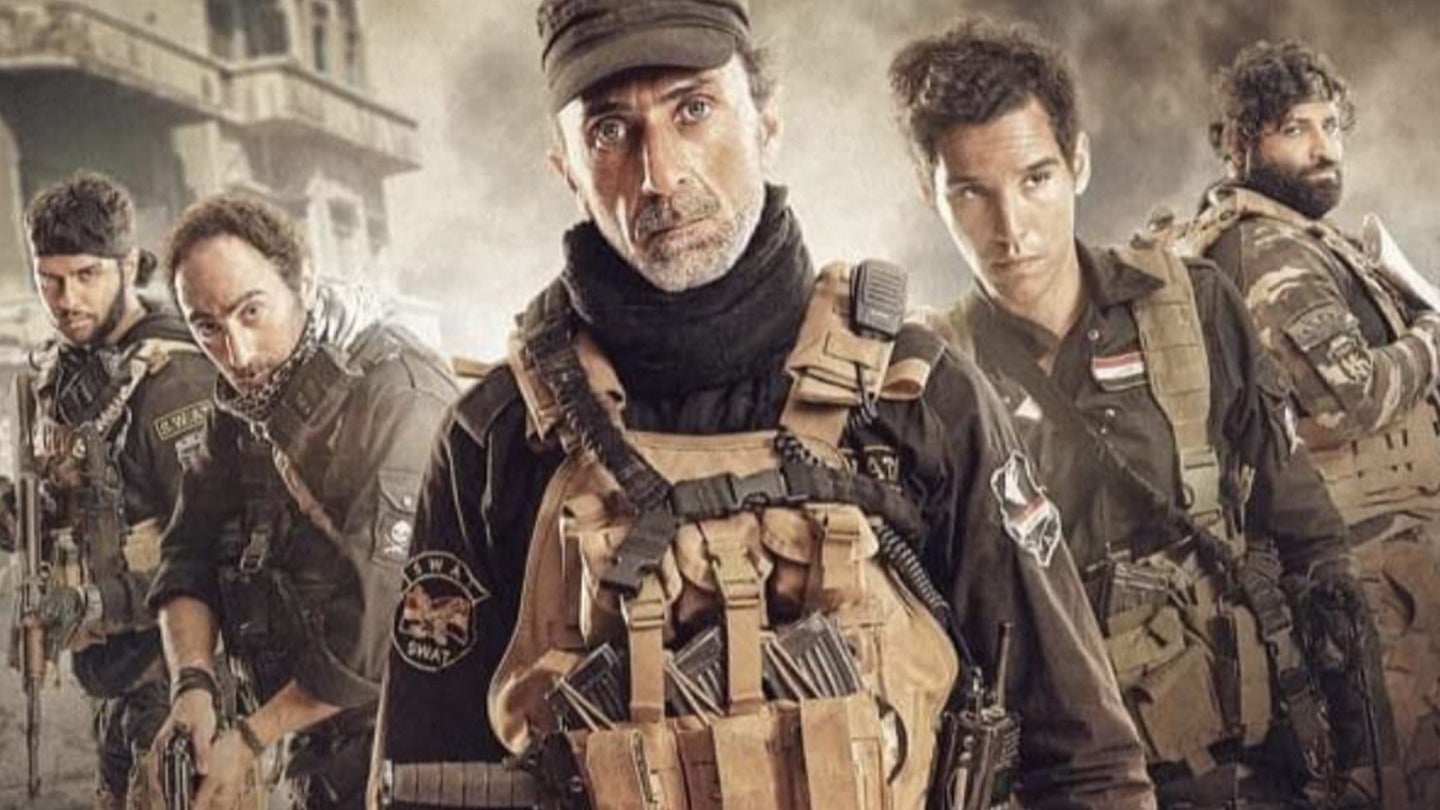 When the credits finally rolled on “Mosul,” I was left stunned, and sat in silence for several minutes processing what I’d just watched. On its surface, the movie has nothing to do with the Iraq War as we (Americans) understand it.

For the 95% of our countrymen who still can’t point to Iraq on a map, U.S. and coalition forces invaded the country in 2003. The invasion led to the toppling of Saddam Hussein’s regime, the capture and eventual execution of the dictator himself, and the establishment of a democratic government in Baghdad. Large U.S. formations remained in the country until 2011. The power vacuum left by their rapid departure, combined with regional instability throughout the Middle East contributed to the rise of the Islamic State group and the devastating sectarian violence that followed. By 2014 the cities of Tikrit, Ramadi, Fallujah, and Mosul had fallen to the onslaught.

Veterans of that conflict had to endure the anguish of watching cities they’d fought and bled in be captured so swiftly by ISIS, often with little resistance. Many of them, myself included, struggled to reconcile the sacrifices we had made with the daily news reports about the rapid collapse of Iraqi allies we had spent years training and fighting alongside. U.S. special operations forces, artillery batteries, and airpower were eventually redeployed to the country to help stem the onslaught.

If you’re an Afghanistan vet reading this with a strong sense of déjà vu, don’t worry, I felt the same thing writing it.

Unlike that conflict, however, the Iraqi coalition eventually held their ground and began to drive ISIS back toward Syria, mile by bloody mile. Mosul was their biggest stronghold in 2016, with over 12,000 devoted fighters vowing to remain until the end. The battle to take back the city involved some of the most savage urban combat since World War II.

The film is set near the end of that fight, which pitted the fanatical remnants of the Islamic State war machine against the combined armies of the Iraq Security Forces (ISF), Peshmerga (Kurdish military), and Popular Mobilization Forces (PMF).

The opening shots (filmed in Morocco) sent chills through my spine, panning over street after street of destroyed homes, downed power lines, and wrecked vehicles. Text overlays introduce viewers to the Nineveh SWAT team, an elite paramilitary force so effective at their work that ISIS, or Daesh, denies them any opportunity to surrender during combat.

There’s no time to appreciate the realism of the scenery though, as you’re dumped directly into a gunfight between ISIS fighters trying to rescue their captured brothers, and the three Iraqi police officers who arrested them for smuggling drugs. They’re outgunned and surrounded, barricaded in an abandoned café, running low on ammo, and trying to protect their charges who are still actively trying to get them killed. The officers are desperate but effective, covering approaches and forcing the attackers to pay a heavy price.

I had mixed experiences with Iraqi forces during my time in-country. Some were braver than the Americans I’d served with, but others were clearly there for the paycheck and having them with loaded weapons on my flank was a tough pill to swallow.

So the first time I watched Mosul I couldn’t put my finger on why the action scenes appealed to me so much until I realized that it was seeing native Iraqis portrayed as the good guys; tough, no-nonsense fighters violently dedicated to their mission and country, without a platoon of Americans waiting in the wings to handle the heavy lifting of combat. These men are the heroes Iraq needs and deserves.

After desperate fighting in the cafe, Kawa, a young Kurdish police officer played by an intense Adam Bessa, is one of two officers still standing. The third is Kawa’s uncle, dead on the floor of the café. They are out of ammo and prepared to die where they stand, when the remaining attackers are gunned down by the timely arrival of the Nineveh SWAT team.

The plot moves at a breakneck speed from there. Kawa is offered a spot in the unit since his uncle was killed during the gunfight. SWAT only recruits men who have lost loved ones to ISIS, so their loyalty to the cause is unquestionable. The men go about their brutal business with professionalism that brings home the high level of their skills while reminding western viewers that this isn’t the American war we veterans fought. The enemy combatants don’t get zip-tied and shipped off to Baghdad. They’re executed on the spot and their gear is stripped for essentials.

The men are led by Suhail Dabbach, giving an exceptional performance as Major Jasem, commander of the Nineveh SWAT. With a few short lines of dialogue, you quickly learn they are on a final mission after losing half their unit and have little mercy for the die-hard remnants of Daesh.

When first offered the hat of a SWAT member, Kawa says he doesn’t really know who the members of the team are. Major Jasem replies, “We’re the men who killed the men who killed your uncle. If you need to know more than that, you shouldn’t take the hat.”

The way these men wear their kit, handle their weapons, and interact with each other is so perfectly portrayed that you can’t help but be absorbed by it. Even with English subtitles, the comradery and gallows humor of these grizzled combat vets feels spot-on. These are not comically under-trained Iraqi militiamen.

In the relatively short 101-minute run time, the movie does an amazing job of character development as Kawa talks to each member of the unit while they pick their way through the shattered city. All the men have a unique backstory and motivation for fighting that brings the real war home. Deploying to Iraq just because your unit came down with orders doesn’t have the same emotional stakes as a young man raised during the American occupation who is furious that a band of religious fanatics has destroyed the country they’re fighting to save.

The film is packed with short, incredibly moving bits of storytelling that reinforce the humanity of the team while not shying away from the horror of the war. In one of the most gut-wrenching scenes, the SWAT members come upon two young brothers, horribly burned and bloodied, pulling the body of their father on a cart. The youngest wants to go with the soldiers, but the oldest wants to stay and bury their dad. When the little boys finished their goodbyes and separated, most likely for the last time, there wasn’t a dry eye in the room.

For the veteran, Mosul also presents a rarely seen perspective of western-trained allies fighting on their terms. Artillery and air support are non-existent. Enemy bodies are looted for ammo and gear as a necessity. An entire attack hinges on the effectiveness of a single RPG round. This is what the American war looks like without the Americans.

I can’t go into much detail about the remaining plot without major spoilers, since each scene does its own share of heavy lifting, culminating with Kawa learning what SWAT’s gut-wrenching final mission was really for, but it brings the war home in a way that I’ve never seen in another film about the conflict.

Incredible action, spectacular storytelling, and character development aside, one of my favorite details is that each time the team stops, Major Jasem cleans up the garbage around him. Mosul is a city that’s been bombed and burned to near-oblivion, with nothing close to a sanitation service, but it’s still his country. During a hostile conversation with an Iranian colonel operating in their area the two men spew insults at each other, with the Iranian declaring that Iraq hasn’t been a real nation since Babylon, and Jasem shouting back that Iran is just a regime founded by hostage-taking kids. It’s a humble reminder that despite how we think of ourselves, other countries do have histories, rivalries, and motivations completely independent from the US of A. Although there’s not a single American in the movie, and the war takes place after we’d all but retreated to our small remaining footprint of forward operating bases, the savage pride of Major Jasem as he cleaned up water bottles while glaring in disgust at the Iranian interloper somehow made me feel incredibly proud of my own tiny part in liberating that country, for no other reason than to allow Iraq the freedom of self-actualization.

As someone who left a big chunk of his early adulthood and a few good friends in the dust of Iraq, I believe Mosul is a masterpiece and ranks as one of the best war movies I’ve ever had the pleasure of watching.

Everyone should experience this film at least once, but for veterans of Iraq or Afghanistan, this is a must-see. Trust me, your soul will thank you.