Portraying The Military In Film And On Television: Who’s Telling Our Stories?

If you ever get bored, lock a bunch of OEF/OIF veterans in a room, throw on “The Hurt Locker” and... 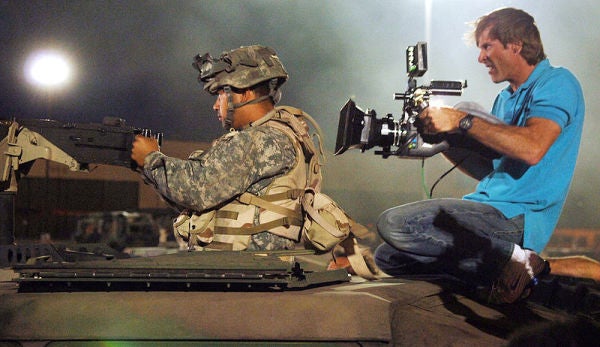 If you ever get bored, lock a bunch of OEF/OIF veterans in a room, throw on “The Hurt Locker” and sit back with your cigar and a fine scotch to watch the fireworks.

While many moments in that film ring true — the scene in the grocery store, the inability to re-adjust to real life before volunteering to head back overseas — it is ultimately unsatisfactory in its portrayal of combat operations in the 21st century.

Kathryn Bigelow's film won a bunch of awards and pissed a lot of people off, and I'm not the first to write about that debate, but on the other hand, what about movies like “The A-Team?” Does anyone believe Baghdad looked like that in 2010?

One of the points common to many of the articles and blog posts published at the time of the film's release was that “The Hurt Locker” and others of its kind made a claim on “our” story — the story that even a former public affairs NCO like myself suspects can only be told and understood by those who shared the experience.

It's not that veterans are opposed to watching war movies. Even downrange, you could always walk into someone's room, or the day room, or weekly movie projected on the T-wall, and find perennial favorites such as “Full Metal Jacket,” “Bridge Over the River Kwai,” or anything starring John Wayne. These movies may not necessarily be “our” specific stories, but we feel a certain connection to them.

So if even “The Hurt Locker” doesn't annoy me as much as it could, and I willingly watch the incredibly unlikely scene of World War II veterans taking on the aliens with nothing but memories and the USS Missouri in “Battleship,” why am I writing this article? The reason is these films are stories specifically created in the genre of military or military action adventure. I know what's coming, and I can steel myself against talking out loud to the screen and thus ruining the experience for the happily unaware civilians who may be watching with me. On the other hand, one tiny inaccuracy in a show that is otherwise not about the military can ruin my day.

A few years ago, I was an avid fan of the short-lived NBC cop series “Life,” until the episode entitled “Shelf Life.” This particular segment focuses on a group of soldiers home on mid-tour leave from Iraq, and hinges on the fact that the main character, a detective investigating a homicide, can't get over the fact that they are not wearing their ID tags. On the other hand, the soldiers have apparently taken on a second job during their leave, and everyone in the show thinks that's perfectly normal.

This was not the first time, nor was it the last, that the uninformed assumptions of a show's creators — especially assumptions that cast soldiers in the role of victims, because of course they took a second job during leave given that we just don't pay them enough — caused me to lose my taste for the entire production.

More recently, the “NCIS: Los Angeles ” episode “Exposure” tried to show a character doing the right thing by giving blood after a terrorist attack. Apparently nobody on the show realized that since the character had recently returned from Afghanistan, she would have been rejected outright at the blood donation center.

I mostly try not to get upset about inaccuracies in the big blockbusters. I know they have the luxury of military advisors — either hired, or out of the public affairs office in Los Angeles — and if something is wrong, then that is clearly the result of the director’s artistic decision. I may think it's a bonehead decision, but someone got paid a lot of money to make it.

Some movies I can't help but give the benefit of the doubt because, golly, they try so darn hard. “Captain America: The Winter Soldier” was almost embarrassing at points given how hard they tried. “Battleship,” another one of those love-them-or-loathe-them movies, went the extra mile to cast actual veterans, as well as wounded warrior Greg Gadson.

Not to be outdone by the silver screen, the small screen offers its own selection of fare addressing military themes, such as the Fox television show “Enlisted,” championed by online instigator military commentator “Doctrine Man!!” In a unique instance of self-flagellation and savvy marketing, the show offered challenge coins to viewers who sent in lists of inaccuracies. Although the show made a concerted effort to continue audience involvement by engaging actors and show makers via Twitter, the network added it to its list of cancelled shows that audiences love.

When it comes to finding our stories in the modern entertainment media, one confronts not just these sins of commission, but those of omission. For example, where are the female soldiers, especially the female junior officers? Where are the servicemembers who return from a combat zone stronger than when they left? Where are the stories told by actual veterans?

I'm not going to stop watching movies or television, but every time I cringe at one of those tiny, eminently fixable inaccuracies, I think to myself, yet again, there are not enough veterans involved in the story-making surrounding our own narratives.

Veterans are out there writing columns, drawing comics, publishing fiction — how hard would it be to find one, run a script by him or her, and catch a story before it falls far off the mark?

In a short time, I will be heading off to the GI Film Festival, which requires a strong military presence in the concepting phase, such as for films in which veterans receive an above-the-line credit, or otherwise “played a key role in production.” I don't expect 100 percent accuracy in all things military, but I am looking forward to a week of good entertainment. I hope that we will soon see these filmmakers' work not just in military-themed festivals, but in the evenings when we turn on our televisions or on weekends for the next big blockbuster opening.