UNSUNG HEROES: The Remarkable Service Record Of The Sergeant Major Killed In Afghanistan

Editor’s note: Unsung Heroes is an effort by Task & Purpose to highlight the stories of bravery and heroism that... 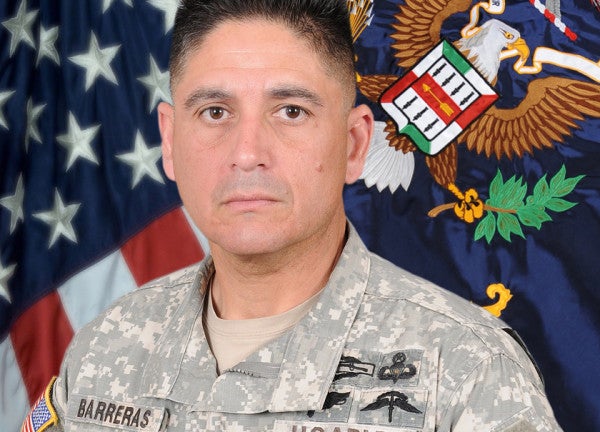 It was an easy call for who would be the first subject of this Unsung Heroes series. Last week, the nation lost a warrior — Command Sgt. Maj. Martin Barreras succombed to wounds sustained earlier this month in combat in Afghanistan. The 49-year-old Arizona native died in the San Antonio Military Medical Center, where he had been transferred following being wounded in combat in Afghanistan on May 6. It was a tragic end to a remarkable career in uniform spanning more than 30 years that started in the Marine Corps in 1983 and featured many deployments to include Lebanon, Iraq, Afghanistan, Panama, and Haiti.

In the volunteer American military, hundreds of thousands of men and women serve one or two enlistments and then reintegrate into the communities they served — this cycle of soldiers is an important part of the fabric of American society. But then there are other soldiers, the ones with no interest in having another job. They’re the warriors who stay in the military until the Army makes them leave. By all accounts, Barreras was one of the latter.

He was an Army Ranger and a member of the Special Forces team that rescued MIA Army Private Jessica Lynch from an Iraqi hospital in 2003. He also reportedly served as an advisor for the “Black Hawk Down” film. “I want them to remember the sense of teamwork that is inherent to a Ranger organization and the amount of attention to detail that's required from every individual that is part of that team,” he said of his role advising the film’s actors.

He is survived by his wife and three children.