More is on the way. 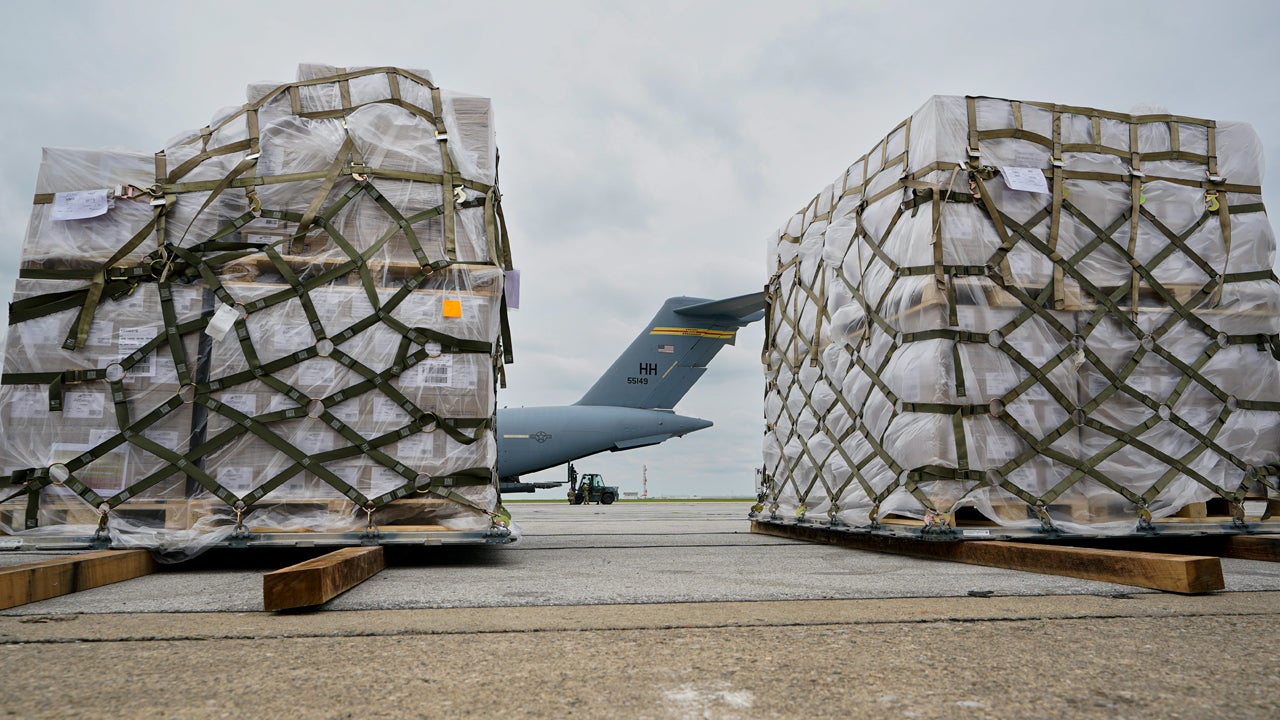 Pallets of baby formula wait to be transferred to a truck after arriving on an Air Force C-17 at the Indianapolis International Airport in Indianapolis, Sunday, May 22, 2022. (AP Photo/Michael Conroy).
SHARE

Tens of thousands of pounds of baby formula have been delivered by a U.S. Air Force C-17 Globemaster III to Plainfield, Indiana, and more is on the way.

The Air Force is working on behalf of Operation Fly Formula, an initiative announced by President Joe Biden last week in response to a nationwide shortage. The effort directed the Department of Health and Human Services, Department of Agriculture, and Department of Defense to bring formula from overseas to the U.S. “so it can get to store shelves faster,” according to The White House.

The shipment delivered on Sunday, which weighed over 78,000 pounds and was enough formula for half a million baby bottles, according to The Associated Press, is one of several shipments the White House is expecting.

The White House said the second shipment would transport 114 pallets of Gerber Good Start Extensive HA infant formula from Ramstein Air Base in Germany to Washington Dulles International Airport. In total, Operation Fly formula is expected to deliver up to 1.5 million 8-ounce bottles of Alfamino Infant formula, Alfamino Junior formula, and Gerber Good Start Extensive HA formula. While the White House originally directed the Pentagon to use commercially chartered aircraft, there were none available this weekend which is why U.S. Air Force planes were used instead, the AP reported.

This is far from the first time the Air Force has been called on in a time of crisis. Just last year, the Air Force pulled off a logistical feat for the ages and evacuated over 124,000 people out of Afghanistan with little notice. The C-17 is made to move heavy equipment — or many people — quickly and effectively.

For weeks, the U.S. has been experiencing a baby formula shortage that is throwing families into crisis. Earlier this month, CNN reported that 40% of the nation’s supply was out of stock. That percentage was even higher in several states including Texas, Missouri, Tennessee, South Dakota, North Dakota, and Iowa.

According to The New York Times, the issue was building earlier this year because of “pandemic-related supply-chain issues and ingredient shortages.” It was then made worse when one of the country’s biggest suppliers, Abbott Nutrition, recalled its products because of possible contamination at the plant where it was manufactured. That plant in Michigan, which NPR reported is a “critical supplier of specialized formula for infants with allergies and other health conditions,” was subsequently closed.

“A huge part of the crisis we’re seeing now is from the closure of one plant,” Kelloway told NPR. The Biden administration is working with Abbott Nutrition to reopen the facility, the White House’s statement said, and issuing FDA guidance for other major manufacturers to “safely import formula that is not currently being produced for the U.S. market.”

But while the wheels are turning to address the shortage, families around the country are scrambling for help and answers — especially families whose children need specific formulas because of medical conditions or disabilities.

One pediatric gastroenterologist in Tennessee, Dr. Mark Corkins, told the New York Times it is the worst crisis he’s seen in his career. He works at the Le Bonheur Children’s Hospital in Memphis, where two children with short bowel syndrome were recently hospitalized because they were unable to get the specific formula they needed.

Around the nation, families are rationing formula and spending hours searching online and in-stores for what their babies need. One primary care pediatrician told the Washington Post of a single mother who described “going on foot to five supermarkets on a fruitless search” before she could get help from social workers.

Lower-income communities and communities of color are being hit especially hard, the Post reported, as half of the nation’s formula is purchased by those who use the WIC program. WIC is a federally-funded program that provides food, information on nutrition and healthy eating, and health care referrals. According to the Post, more than 1.7 million children in the U.S. are in the WIC program.

The formula delivered on Sunday was taken to Indianapolis because it’s a Nestle distribution hub, the AP reported. From there, it will be loaded onto FedEx trucks and taken to a nearby distribution center where it will undergo a “standard quality control check” before it is distributed to “hospitals, pharmacies, and doctor’s offices.” The flight coming in from Germany to Dulles will be transported to a Nestle facility in Pennsylvania, where it will be transported via FedEx’s “integrated air and ground network.”

“Our team is working around the clock,” Biden tweeted, “to get safe formula to everyone who needs it.”