“We are currently doing our best in a difficult situation, preserving humanity and valuing every human life.” 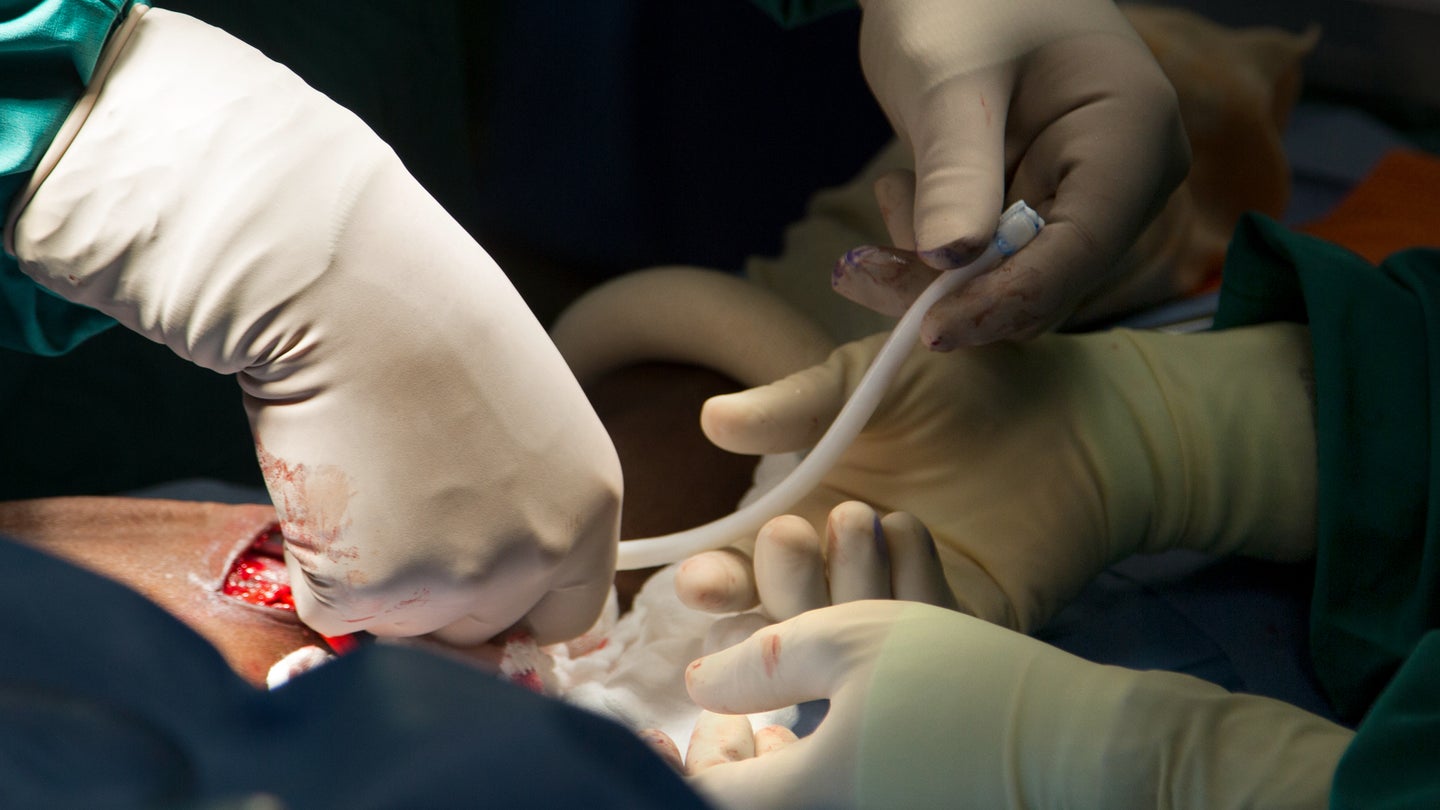 Surgeons handle a human acellular vessel during an operation. The off-the-shelf, bioengineered blood vessel is being studied for use in repairing and reconstructing various types of vascular injuries. (Humacyte Inc. via U.S. Army).
SHARE

New, cutting-edge medical technology funded by the U.S. Army may not have been approved for full use in America, but it’s already saving lives in Ukraine.

The human acellular vessel (HAV) is a “bioengineered blood vessel” used to treat patients in Ukraine suffering from gunshot and shrapnel wounds, mine blast injuries, and more, according to a recent Army release. A press release in September from Humacyte Inc., which developed the product, called the HAV an “infection resistant vascular conduit,” which will help quickly restore a patient’s blood flow.

The development of the HAV was supported by the U.S. Army Medical Research and Development Command (USAMRDC) and its partners, including Humacyte Inc., the release said. It has since become “a key player on the global medical stage.”

“We are very grateful for the invaluable support during this difficult time,” a Ukrainian doctor, Dr. Oleksandr Sokolov, told USAMRDC in an email. “The HAV implantations performed for patients with blast trauma helped save their lives and limbs.”

Since Russia’s invasion of Ukraine began in February, as many as 6,374 civilians, have been killed, according to the UN, and another 9,776 have been injured. Sokolov was born and raised in Ukraine and has been working “round-the-clock” since the war began.

He estimates that more than 80% of people with vascular injuries have “died almost immediately,” according to the release, because of the both lack of care and the severity of their injuries. But now, Sokolov says the HAV — which was described in 2019 as a “regenerative vascular implant that physically becomes part of the patient — saves surgeons “significant” time by not having to remove a patient’s vein to make a bypass.

In 2018, research published in the National Library of Medicine said vascular injury is “a leading cause of death and disability in military and civilian trauma.” The authors of the research, which include officials from the Walter Reed National Military Medical Center, observed vascular injuries during seven years of the Afghanistan War and found that the rate of vascular injuries “is higher than reported.”

“Proficiency with open and endovascular methods of vascular injury management remains a critical need for the U.S. military and will require partnership with civilian institutions to attain and maintain,” the 2018 report concluded.

Indeed, the HAV has been years in the making. In 2019, an Army release said the “lifesaving product” helped save a shooting victim’s arm. Humacyte Inc. co-founder Juliana Blum said in the release that having the support of the Army has been “a key piece of our puzzle.”

Humacyte first began clinical trials with the HAV in 2012, using it in end-stage renal disease patients, the recent Army release says. Officials with the Defense Department encouraged them to approach the Medical Technology Enterprise Consortium, who helps identify new medical solutions for the military, with their technology. Years later, in 2017, USAMRDC provided more than $6.8 million in funding to Humacyte to further develop the HAV.

The device was tested in patients with blood vessel damage “cause by blunt trauma, penetrating injuries or other catastrophic events,” the release says. And while it is still technically identified as an “investigational product” by the Food and Drug Administration, it quickly became a staple in requests from Ukrainian surgeons like Sokolov.

Blum, the co-founder of Humacyte, says in the Army release that they received one or two requests for the HAV when Russia’s invasion began. That number has since grown larger, and after working with Ukraine’s Ministry of Health and FDA’s Office of International Programs, along with a “myriad of supply chain experts and medical supply depots,” the HAV has been sent out to several Ukrainian hospitals for use.

According to Sokolov, having the ability to use the HAV in dire situations has been, quite literally, life-saving.

“We are currently doing our best in a difficult situation, preserving humanity and valuing every human life,” he said in the Army release. “I feel that I am needed right here, today.”