William T. Ericson was hiking when he saw a ship break apart on the rocks. He dove into the water multiple times to save lives. 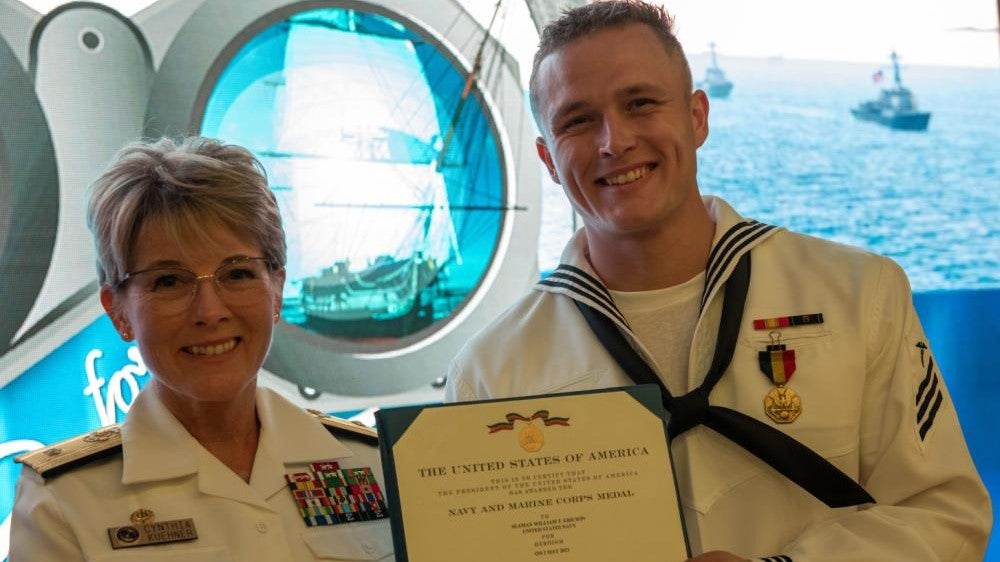 William T. Ericson was enjoying time off duty last May and certainly not looking for danger. But when he saw a ship veer into rocky outcrops off the coast of San Diego, sending passengers into the water, he ran toward the wreck. Now the Naval Medical Forces Support Command is honoring him with the Navy and Marine Corps Medical for his actions in helping rescue survivors. The award was presented as part of the celebrations of the Navy’s birthday.

Ericson, a hospital corpsman,  was off duty, hiking in the Cabrillo National Monument near San Diego on May 2. Just after 10 a.m. San Diego lifeguards got reports of a ship adrift, with one person onboard. It turns out that the numbers were closer to 30. People started swimming, some making it to the rocky shore, others still in the ocean. Several people found themselves caught in a riptide. Lifeguards rushed to the scene, as did Ericson who saw the crash unfold. He swam to the wreck, pulling people to safety.

Conditions were rough. Waves were five-to-six feet high, according to lifeguard Lt. Rick Romero, who spoke to the San Diego Union Tribune after the rescue operation concluded. Some people found themselves swept up in riptides or submerged. Ericson went back into the water. He found four people tangled up by debris and other items under water. The hospital corpsman cut them free, pulling them out of the water and to the shore, saving their lives.

What Ericson and others who responded did not know in the immediate rescue was that the ship was apparently a human trafficking vessel moving migrants across the border. The smuggler was among those rescued, according to reports at the time. Four people died in the wreck and the aftermath. Firefighters, Border Patrol, the Coast Guard and lifeguards all responded to the incident.

In the aftermath of the shipwreck and rescue, Romero praised Ericson for his efforts in helping out. The sailor was “a huge help,” Romero told the San Diego Union Tribune.

Ericson was awarded the Navy and Marine Corps Medal in recognition of his actions. The award is the highest such honor both services can bestow for actions outside of combat. Rear Adm. Cynthia A. Kuehner, head of Naval Medical Forces Support Command, presented Ericson with the award during the 247th birthday celebration for the Department of the Navy.

“I am humbled to be in the presence of this Sailor, who joins the ranks of hospital corpsmen before him and other Navy and Marine Corps Medal recipients, including President John F. Kennedy and infamous Master Diver, Master Chief Petty Officer Carl Brashear,” Kuehner said. “HN Ericson’s valorous acts embody selfless service and the Navy core values of honor, courage and commitment.”