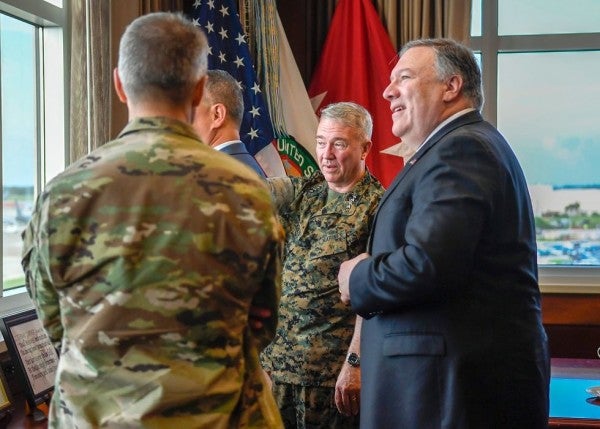 WASHINGTON — The United States has designated Asaib Ahl Al-Haq as a Foreign Terrorist Organization (FTO), saying the Iraqi militia is a proxy for Iran.

The U.S. State Department statement on January 3 said that it was also sanctioning two of the group's leaders.

Secretary of State Mike Pompeo called the militia and its leaders “violent proxies of the Islamic Republic of Iran.”

The State Department said Asaib Ahl Al-Haq, also known as the League of the Righteous, is backed by Iran's Islamic Revolutionary Guard Corps (IRGC) Quds Force, which has been similarly designated by the United States.

The State Department said it also designated Qais al-Khazali, leader of Asaib Ahl Al-Haq, and his brother Laith al-Khazali, another leader of the group, as specially designated global terrorists.

Such designations will freeze the U.S.-related assets of the group and the two leaders, generally ban Americans from doing business with them, and make it a crime to provide support or resources to the militia.

Qasem Soleimani, one of the most powerful military men in Iran, was killed in an attack on two vehicles at Baghdad's international airport in the early morning hours of January 3.

Tehran has vast influence and supports many Shi'ite militias based in neighboring Iraq. Baghdad has attempted to balance its relations between the United States and Iran, both of which provide crucial military and financial support to the struggling government.

With reporting by Reuters