Leave It To A Marine To Write His Own Hilarious Obituary 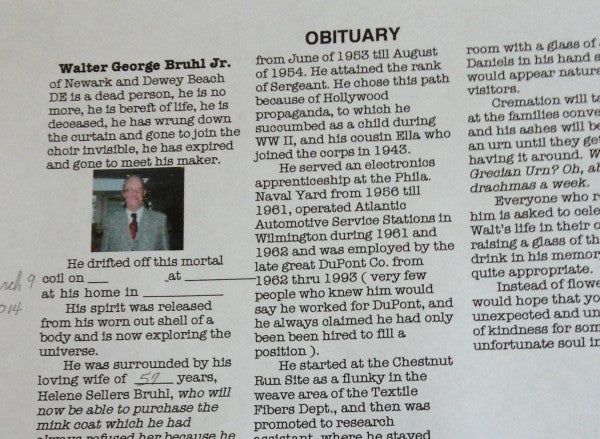 He died quietly in his home, but it’s his obituary that has millions of people talking.

Bruhl wrote his own obituary, complete with fill-in-the-blanks, which his grandson posted to Reddit, and it’s glorious.

“He was surrounded by his loving wife of ___ years, Helene Sellers Bruhl, who will now be able to purchase the mink coat which he had always refused her because he believed only minks should wear mink.”

“Walt was a Marine Corps veteran of the Korean War having served from October of 1951 to September of 1954, with overseas duty in Japan from June of 1953 till August of 1954. He attained the rank of Sergeant. He chose this path because of Hollywood propaganda, to which he succumbed as a child during WWII, and his cousin Ella, who joined the corps in 1943.”

(I also joined the Corps because I succumbed to Hollywood propaganda).

But my favorite portion is this:

“There will be no viewing because his wife refuses to honor his request to have him standing in the corner of the room with a glass of Jack Daniels in his hand so that he would appear natural to visitors.”

“Instead of flowers, Walt would hope that you would do an unexpected and unsolicited act of kindness for some poor unfortunate soul in his name.”

Read the full obit below: