The lights of Doha spark awake as the dhow floats gently in the harbor. It is a majestic metropolis with... 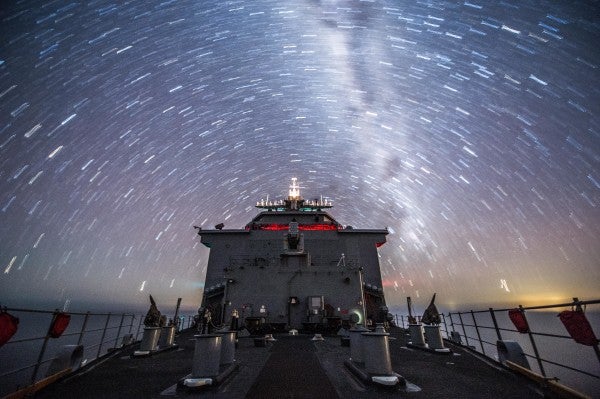 The lights of Doha spark awake as the dhow floats gently in the harbor. It is a majestic metropolis with a beating heart, yet artificial and soulless, the cracks in the ceiling flaking down before my eyes.

I am somewhere near halfway through deployment, my third in the course of four years. The times in between are hardly relaxing, but rather filled with feverish preparations for the next departure that always feel more stressful than actually being overseas. Chances to stop and think are rare, and yet here I am, traveling alone and afloat in Qatar.

I am tremendously lucky to have received permission to travel to another country for a weekend, for fun, in the midst of my persistent weekly chaos. Although only a 15-minute flight over the Arabian Gulf, the journey is a four-hour ordeal involving various logistical hurdles at airports in both countries.

It takes that long to drive through neighboring Saudi Arabia, which is slightly problematic for me.

I love the departure and approach of flight anyway, the orange grid of a city speckled in the darkness.

Friends I have made while on this latest overseas jaunt invited me on a weekend getaway to a tiny peninsula. I have known them for only a brief period of time, but the further I am from home, the more these details become minute. Camaraderie is swift and intense.

Weeks earlier, I am sitting across from a friend at a popular café in Bahrain, watching gilded SUVs crowd the narrow alley, women in black abayat billowing by. My friend and I are from different countries but both in the military, wandering souls, happy to get away from our own employers for a little while. We are nothing alike, a decade apart in age, but bound by the shared experience of feeling lost in this part of the world that seems like an impressive assembly of cardboard cutouts of the familiar. It never feels quite right.

We talk about the transient lifestyle we’d chosen, truly impossible to articulate to someone who has not also been at that crossroads of time and place. Coming from a non-military family, from a city with almost no military presence and a degree from a university with no ROTC program, I constantly feel caught between two worlds: my liberal arts education and my service. To me, there is no dissonance between the two, but to others, the two do not fit together. I want to be both at once.

My friend theorizes, “You leave bits of yourself everywhere you go. This kind of life means you leave behind pockets of time that are yours alone.”

The time I drove cross-country alone, through the north in winter, to report for duty. The time I saw cherry blossoms bloom in Japan while assigned to assist with the humanitarian relief effort. Going for a run in the Straits of Malacca. A meteor shower, at night, in the middle of the ocean, on my birthday. Nearly stranded in Djibouti for Christmas, then ending up with 15 hours roaming Addis Ababa on the stopover home. Walking off a helicopter into a major mission planning meeting and realizing, after mission completion, that I was the only woman in the room.

While people constantly surround you, service is a fundamentally lonely business. Profound friendships are forged in the solitude and longing for home, which itself becomes an alien concept. You’ll make a family for six months at a time, and then you leave or they do. Your shared experiences sometimes overlap, but usually your commonalities are that you have disparate histories.

You come to long for simplicity, for sitting alone on your couch at home and enjoying your own apartment. You come to long for sitting in the car, driving to the supermarket while holding the hand of the one you love. And then it’s a very strange phenomenon to realize that you have become exactly whom you'd like to be when you grow up, that you really do love your job, that you have become someone that you're more or less happy to be, and that it's also time to start thinking about doing something new, because you desire nothing more than some dailiness.

I send a selfie of the Doha skyline behind me to my friends in the States. “I’m so jealous of your adventures!” a friend exclaims in her response, “I wish I could live like you!”

Oh my friend, but you can, and without missing most graduations, weddings, funerals, date nights, and decadent comfort of eating take out on your couch on a Saturday night!

Every deployment, we come up with all these wild ideas about what we will do when we come home: get in better shape, learn a skill, take a class, visit a National Park. Accomplishing them all is impossible — the satisfaction of daily simplicity is too seductive — but achieving at least one of those goals is also inevitable.

As for me, after my first deployment, I made one promise to myself: that I would do something new every week, even if it was as simple as seeing a movie. With deployments taking me to 11 countries and on three cross-country roadtrips in the U.S., I have been scattered everywhere. But the bits that I have left behind have left room for the new. What remains is more space to fill, the reach to grasp further, and keep seeking, questioning, the relentless pursuit of the whole.

Anna Granville is a Naval Officer currently serving overseas. Her poetry and short fiction have appeared in The Copperfield Review and Literary Cavalcade. She lives in California.