Overcoming Obstacles: One Woman’s Journey To Becoming An Army Firefighter

Being that I spent most of my high school career participating in theater, competing in speech tournaments, and writing for... 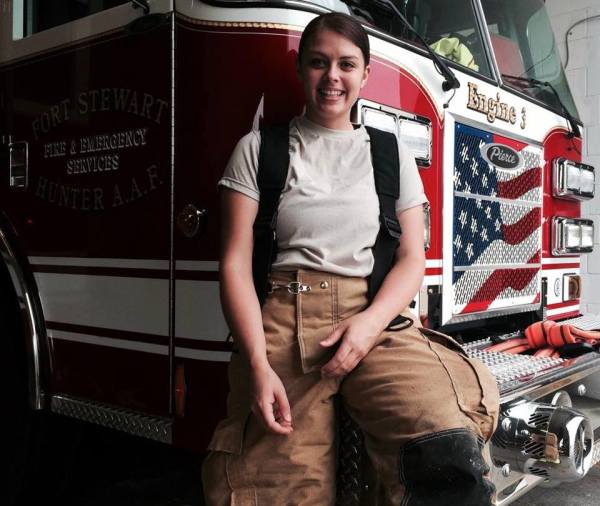 Being that I spent most of my high school career participating in theater, competing in speech tournaments, and writing for the school newspaper, I really didn’t do anything strikingly active that would perhaps constitute the need for a second shower. Unsurprisingly, my family was shocked when I told them I wanted to become a soldier. Although their smiles gleamed with support, their worrisome eyes feared I wouldn’t make it. Truth be told, I had a similar fear. Creatively, things came easy to me. Athletically, however, objectives were a little more challenging. But for some reason, I was motivated by the challenge.

I remember arriving at the recruiting station in the summer of 2012. My hands clenched onto the U.S. Army pamphlet tightly. It had various circles drawn all over it with Sharpie marker, outlining the individual jobs I was interested in. I had circled diver, public affairs specialist, firefighter, combat photographer and even veterinary specialist. Of course, I had assumed all of my desired jobs would be rather unlikely to obtain. I walked in, ready to choose my military occupational specialty, and my recruiter, Staff Sgt. Adams said, “How would you feel about being a firefighter?”

I couldn’t believe it, but after signing on the dotted line and being sent to basic training, it became believable in an instant.

Several months later, deep in the Midwest at Fort Leonard Wood, Missouri, the sun’s heat bled through our uniforms. Our teeth were grinding as our bodies trembled through the push-ups. It felt like the tenth time in the past 30 minutes that we had been put into the front-leaning rest position. We were all trembling, our body weight feeling heavier as the seconds passed.

Being that there weren’t many females in my company, it was rather difficult to go unnoticed, as many aim to do during those nine crucial weeks. I heard my name screamed so many times that I actually became annoyed with it.

For nine whole weeks, I listened to the you won’t make it type comments, and admittedly, after being completely immersed in the negativity, there were moments I believed them. However, as if these comments were a boulder blocking my path, I continued to push, determined to roll it out of my way.

As most soldiers know, basic training is like a fish bowl. And in that fish bowl, it’s so easy to forget what motivated you to enlist in the first place. When I found out I was going to be a firefighter, my motivation became more than to just serve my country. I was going to be trained to save lives, to be a first responder in emergencies that unfortunately can happen at any time and any place, right here, on our own soil. Keeping this in mind, I didn’t let the struggles I faced at basic training keep me from becoming who I wanted to be. Believe me, I had to dig deep, but eventually I found the strength I needed to achieve my goals. All along, that strength was stored in the muscles, the bones, the lungs, and the heart — but mostly in the brain. The entire time it was nothing but a mental game. The sweat, the tears, the feelings of worthlessness were nothing but a test to see whether or not I would give up.

The test didn’t stop at basic training, but rather continued to challenge me in Advanced Individual Training. After carrying 150 pounds out of a burning building, handling a one-and-a-half inch hose, spraying water at 150 per square inch, and learning the basic firefighting skills for various emergencies, I did exactly what they said I couldn’t do. They told me I couldn’t be a firefighter; they told me I was too weak. But four months after the completion of basic training, I graduated the Louis F. Garland Fire Academy at Goodfellow Air Force Base.

I remember standing in the graduation room thinking about everything I had gone through, everything I had struggled with, and all the obstacles I overcame. They thought I couldn’t do it, and honestly, neither did I. I thought I was pushing myself to prove them wrong, but to my disbelief, I was trying to prove myself wrong all along.

You can be anything you want to be. With the ambition, the heart, and the mentality, you can achieve everything you thought you couldn’t.

To announce that I had successfully graduated, they called my name and this time, I wasn’t annoyed by the sound of it. Master Sgt. Daniels pinned the engineer castle onto my collar and said proudly, as if he knew everything I had gone through, “You did it. You’re officially a U.S. Army firefighter.”

Cynthia Riebesell is a private second class in the U.S. Army. She is currently stationed at Fort Stewart, Georgia, in the 514th Firefighting Detachment, working 48 hours on, 72 hours off.