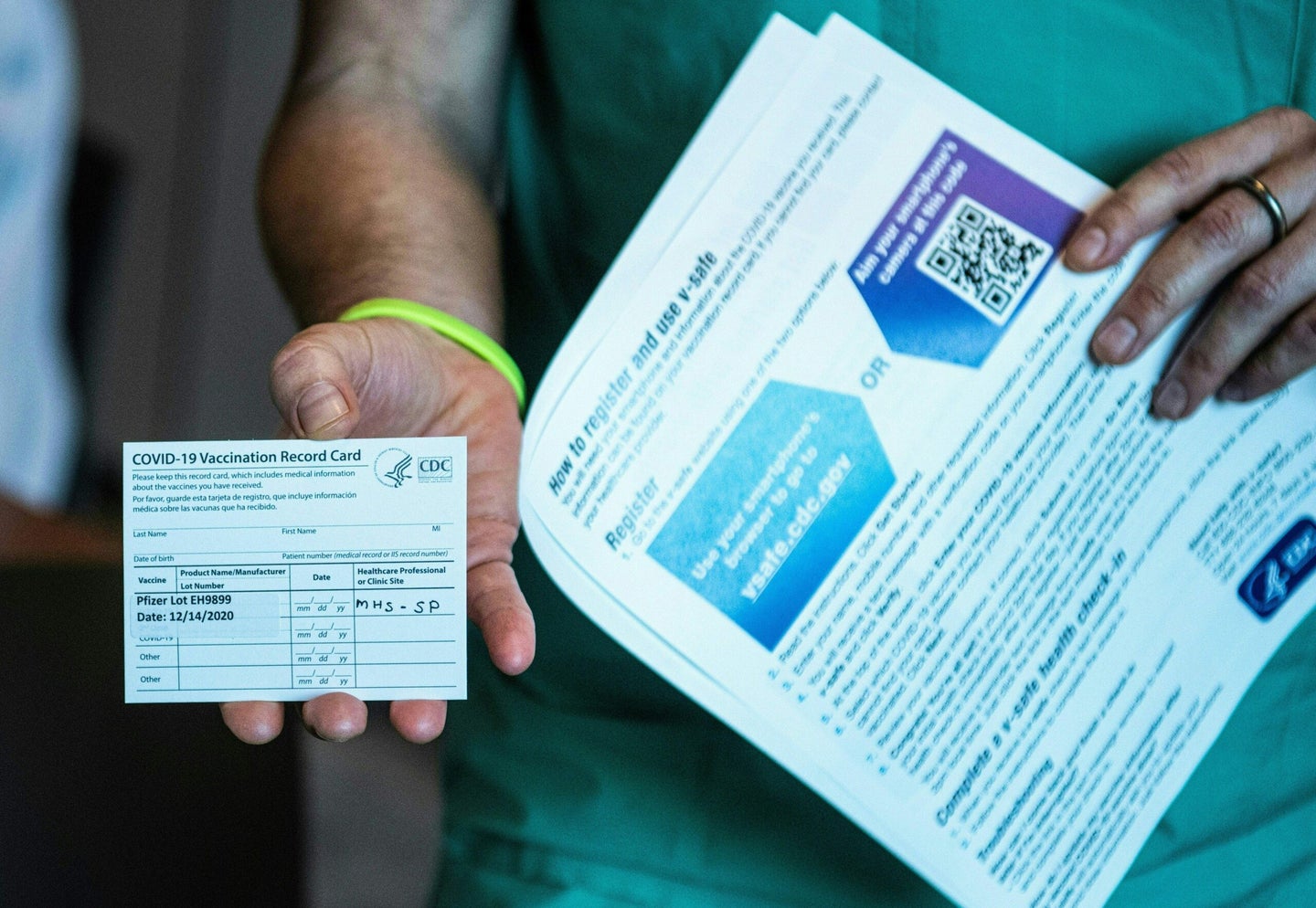 Dan Lacey, a medic at Memorial Healthcare System, shows his vaccination record card after receiving a Pfizer-BioNtech Covid-19 vaccine from Cheryl Birmingham at Memorial Healthcare System, in Miramar, Florida on December 14, 2020. - The United States kicked off a mass vaccination drive Monday hoping to turn the tide on the world's biggest coronavirus outbreak, as the country's death toll neared a staggering 300,000. (Photo by CHANDAN KHANNA / AFP) (Photo by CHANDAN KHANNA/AFP via Getty Images).
SHARE

A Marine veteran who was charged with involvement in the Jan. 6 riot at the U.S. Capitol, while serving in the Marine Corps Reserve, is now facing more federal charges for allegedly selling fake COVID-19 vaccine cards to fellow Marines.

Rodriguez and Liu, who allegedly made thousands of dollars and distributed at least 300 fake vaccine cards, were arrested on Thursday.

The Marine Corps is “aware of the situation” and is “fully cooperating with federal authorities,” said Maj. Jeremy Wheeler, spokesman for Marine Forces Reserve Headquarters.

Wheeler added that Liu has “no drilling responsibilities” being in the Individual Ready Reserve and is pending administrative separation. The Marine Corps had already begun administrative separation for Liu before he was arrested on the fake vaccine card charges, Wheeler said. The IRR, as it’s commonly called, is a mandatory obligation, usually four years in length, that service members are called upon to fill after completing their initial service commitment. Though those on IRR are essentially “out” of the military, they can be called back to service under certain circumstances.

While Wheeler did not specify why Liu was being separated from the IRR — saying it was for “unrelated misconduct” — Liu was previously charged for entering the U.S. Capitol during the Jan. 6 riots. According to the Department of Justice, Liu was arrested in October 2021 and charged with entering and remaining in a restricted building, disorderly and disruptive conduct in a restricted building, disorderly conduct in a capitol building, and parading, demonstrating, or picketing in a capitol building.

Liu enlisted in the Marine Corps Reserves in May 2014, according to the DOJ. His service record says he deployed to Bahrain and Jordan in 2017 and left the Reserves in September 2021. His last duty assignment is listed as being with the 6th Communications Battalion based out of New York.

The fake vaccine card scheme ran from March 2021 “or earlier” to February 2022, according to the indictment filed on Wednesday. Liu and Rodriguez allegedly conspired to “steal and forge” COVID-19 vaccine cards and then forged the cards to say the person it belonged to had been vaccinated. Liu “served as a distributor” of the cards, the indictment says, and he often “charged a higher price” for the forged cards than he paid Rodriguez in order to turn a profit.

The two allegedly offered prospective customers options: they could buy either blank COVID-19 vaccine cards or completed cards that had the customer’s date of birth, name, and the location of where they supposedly received the vaccine. Liu and Rodriguez also offered to enter customers’ fake vaccine data into the Immunization Database, the indictment says.

The way the scheme worked was customers would make appointments at the healthcare clinic where Rodriguez was employed as a nurse, according to the indictment. Rodriguez then “destroyed a vial of vaccine,” gave the customer a forged vaccination card, and entered the vaccination data into the Immunization Database.

To avoid detection, the two often communicated with customers through encrypted messaging apps, and when customers paid them through apps like Venmo or Zelle, they were instructed to use terms like ”Korean BBQ” or “consultancy.”

Among those customers were allegedly other Marines. The indictment said Liu created and distributed fake cards to Marines from August 2021 to January 2022, “to help them evade COVID-19 vaccination requirements.”

In total, the two distributed at least 300 fake vaccine cards and made more than 70 false entries in the Immunization Database, according to the indictment.

“The COVID-19 vaccination card fraud scheme allegedly perpetrated by Liu and Rodriguez resulted in more than 300 stolen or false vaccination cards circulating throughout the community, and in the destruction of multiple doses of a vaccine intended to protect people from the most severe effects of the virus,” FBI Special Agent-in-Charge Michael Driscoll said in the DOJ release.

“Schemers who defraud the government in any way — and profit from pocketing the funds — will continue to be held accountable.”