Petersen was a "pioneer not just for Marine Corps aviation but for [the] entire naval force." 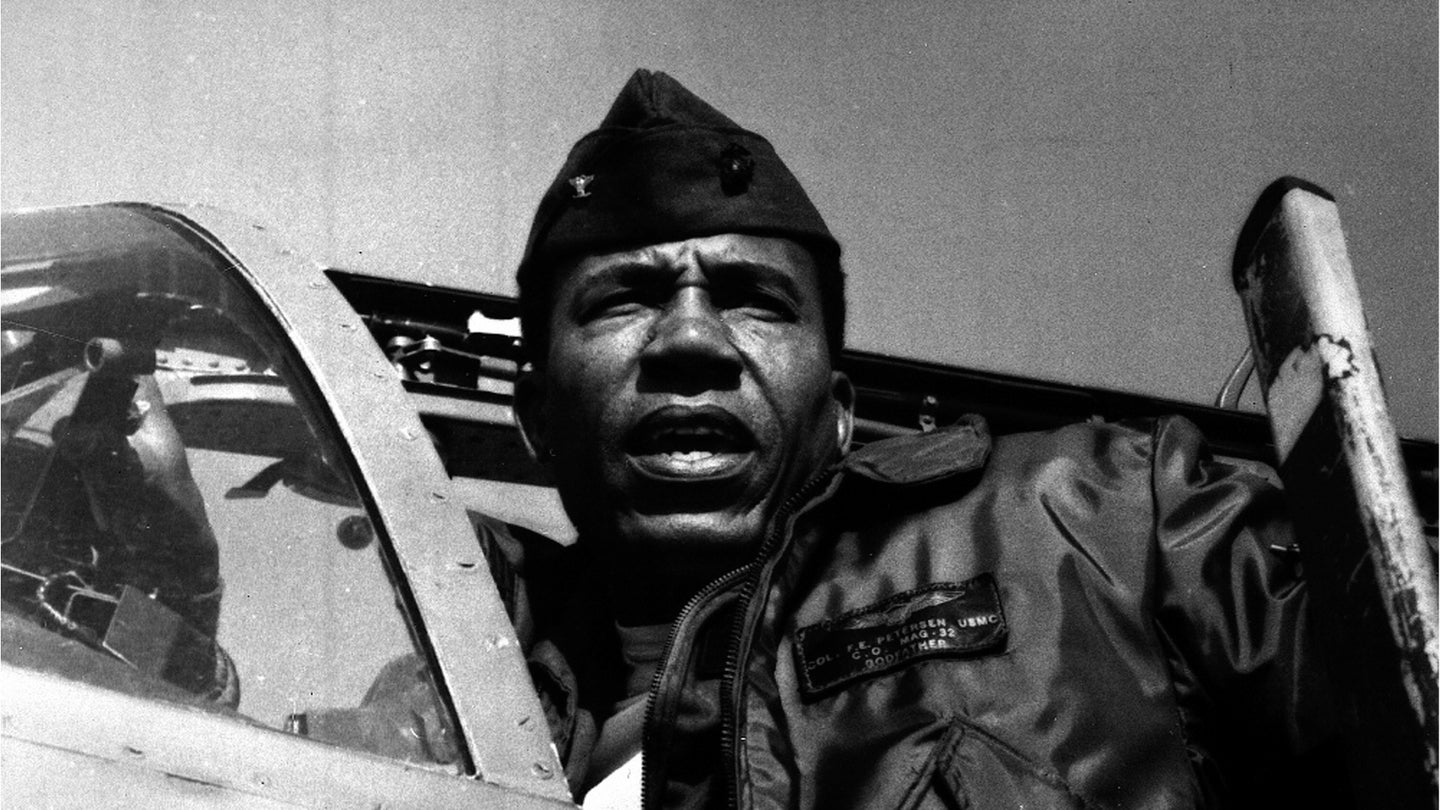 Retired Lt. Gen. Frank E. Petersen, Jr was the first Black Marine Corps aviator and the first Black Corps general. Petersen served during the Korean War in 1953 and Vietnam in 1968. During his career, he flew more than 350 combat missions and more than 4,000 hours in various military aircraft. He died on Aug. 25, 2015.
SHARE

Frank Petersen Jr.’s Marine Corps career was ground-breaking in many ways. In 1952, he became the first Black Marine aviator and almost immediately began flying combat missions in the Korean War. After receiving the Distinguished Flying Cross for one of those missions, Petersen became the Marine Corps’ first black general officer in 1979, retiring nine years later as a three-star general. He died in 2015 at the age of 83.

Now the Navy is honoring Petersen by commissioning a new destroyer named for him. The ceremony for the USS Frank E. Petersen Jr. is scheduled to take place on Saturday in Charleston, South Carolina. While the commissioning will have a limited audience due to the ongoing novel coronavirus (COVID-19) pandemic, the ceremony will be livestreamed.

The ship’s sponsors are D’Arcy Ann Neller, wife of retired Gen. Robert Neller, former Marine Corps Commandant; as well as Petersen’s wife, Dr. Alicia J. Petersen, who died in September 2021, according to the Defense Department. Both Neller and Alicia Petersen took part in the ship’s keel laying, mast stepping and christening ceremonies. Neller will give the order on Saturday to “man our ship and bring her to life.”

“This ship honors the life and legacy of Lt. Gen. Frank E. Petersen, Jr., a pioneer not just for Marine Corps aviation but for our entire naval force,” Navy Secretary Carlos Del Toro said in a statement. “I have no doubt the crew will be a cornerstone of the Surface Force carrying his legacy forward and strengthening the bond between our Navy and Marine Corps team.”

In a video recorded before his death, Petersen explained that he enlisted in the Navy when he was 18 and then he was inspired to become a pilot by Ensign Jesse L. Brown, the first Black naval aviator, who was shot down in December 1950 while he was flying on a mission over the Chosin Reservoir. Brown’s wingman Lt. j.g. Thomas J. Hudner Jr. received the Medal of Honor for crash landing his own plane near Brown in an attempt to rescue the downed pilot.

“When I read that story, I thought: OK, let me see if I could have a shot at flying in the Navy,” Petersen said.

He explained that he later transferred to the Marine Corps after another Black cadet, who was a Marine, was unable to make it through flight school and persuaded Petersen to try to be the first Black Marine aviator.

“I was determined that I was going to give it my best in terms of getting through the flight school,” Petersen said. “With luck along the way — and a lot help from others — I made it through the program.”

It was not an easy journey. One of his flight instructors failed him and predicted he would never fly, according to The New York Times. When Petersen arrived at Marine Corps Air Station in El Toro in California, a captain accused him of impersonating an officer and had him arrested. Later, a landlord in Hawaii refused to rent a house to Petersen and his wife because they were Black.

Petersen did not mention any of this in the video. He talked instead about how he arrived in Korea just three months after being assigned to El Toro, which was where combat pilot replacements were being trained at the time.

“On one of those missions, the leader — and I was flying the second section lead — his radio went out and I took over command of that particular flight, hit the target, and picked up some shrapnel along the way,” Petersen recalled. “On return, the squadron decided that merited me the Distinguished Flying Cross.”

“It was rather abrupt from a young Kansas farm boy to all of a sudden being a 21-year-old second lieutenant with a Distinguished Flying Cross under his belt,” he continued.

Petersen would eventually fly more than 350 combat missions in both Korea and Vietnam, spending more than 4,000 hours in various aircraft. In 1968, he ejected from his F-4 that was heavily damaged by enemy fire and rescued before the enemy could take him prisoner, according to We Are The Mighty.

When he retired in 1988, Petersen was the senior ranking aviator in both the Navy and Marine Corps, earning him the titles of “Silver Hawk” and “Grey Eagle.”

“The barriers that were overcome, I feel proud at having been part of that,” Petersen said in the video. “But for every bad event that took place – I say ‘bad event’ in terms of the things that may have happened to me – there are counterpoints. So, it’s sort of a balance: the good and the bad – but now, there’s a helluva lot more good than bad.”