The average time for an enlisted service member to become a Navy chief is 13 years. On the officer side,... 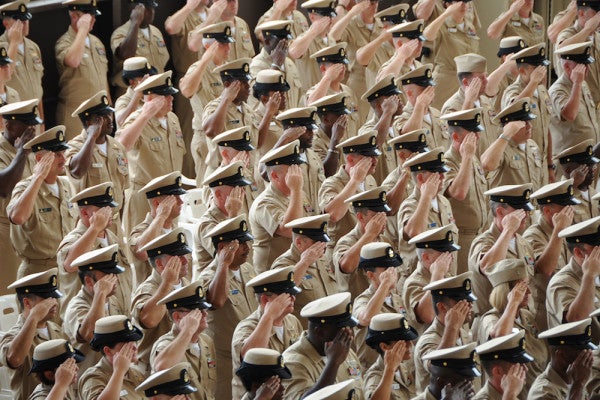 The average time for an enlisted service member to become a Navy chief is 13 years. On the officer side, less than half of all commanders ever make it to captain, even after serving 21 or more years. But now, the Navy will begin filling these positions with civilians who possess specialized skills. The only requirement will be to make it through boot camp.

This decision stems from the military's plan to recruit mid-career specialists to manage areas like cyber warfare, where the best operators glean their formative experience from the private sector.

“Right now the one we’re focused on is the cyber because that’s the immediate need,” Vice Adm. Robert Burke, chief of naval personnel told Navy Times. “But we want this authority in place … because we want to be responsive when the need comes — we don’t want to start writing policy the minute we discover we need it.”

In an email, Chief of Naval Personnel spokesman Lt. Cmdr. Nate Christensen said, “The Department of Defense, through its Force of the Future initiative, has requested that Congress expand lateral entry authority for officers.”

Now, “we're seeking the authority to bring somebody in at the E-7 level or up to the O-6 level,” Burke said.

On the enlisted side, Navy policy already allows sailors to enter in up to the E-6 level, but it is limited to musicians.

However, there isn’t just a question of whether the Navy needs to be able to recruit mid-career specialists, but how lateral entry will impact the overall force structure.

The greatest challenge to altering the lateral entry rules may be persuading career-long Navy officers and enlistees to accept ranking members whose only military experience is boot camp.

It is yet to be seen how enlistees and officers who have spent years serving in the military would respond to the authority of an E-7 or an O-6 that has no prior military background, and has been recruited for this job based on private sector experience instead of working to rise through the ranks as they have.

When asked about potential shortcomings regarding the integration of mid-level specialists, however, Christensen said, “Not sure what you mean about shortcomings.”

As of now, the Navy does not have any detailed implementation plans, but could put this into effect as soon as October, pending Congressional approval.

“We are not assuming anything,” Christensen added. ”That said, we would like to have the authority in order to use it, if needed, to meet critical skills.”