This isn't something you see every day. 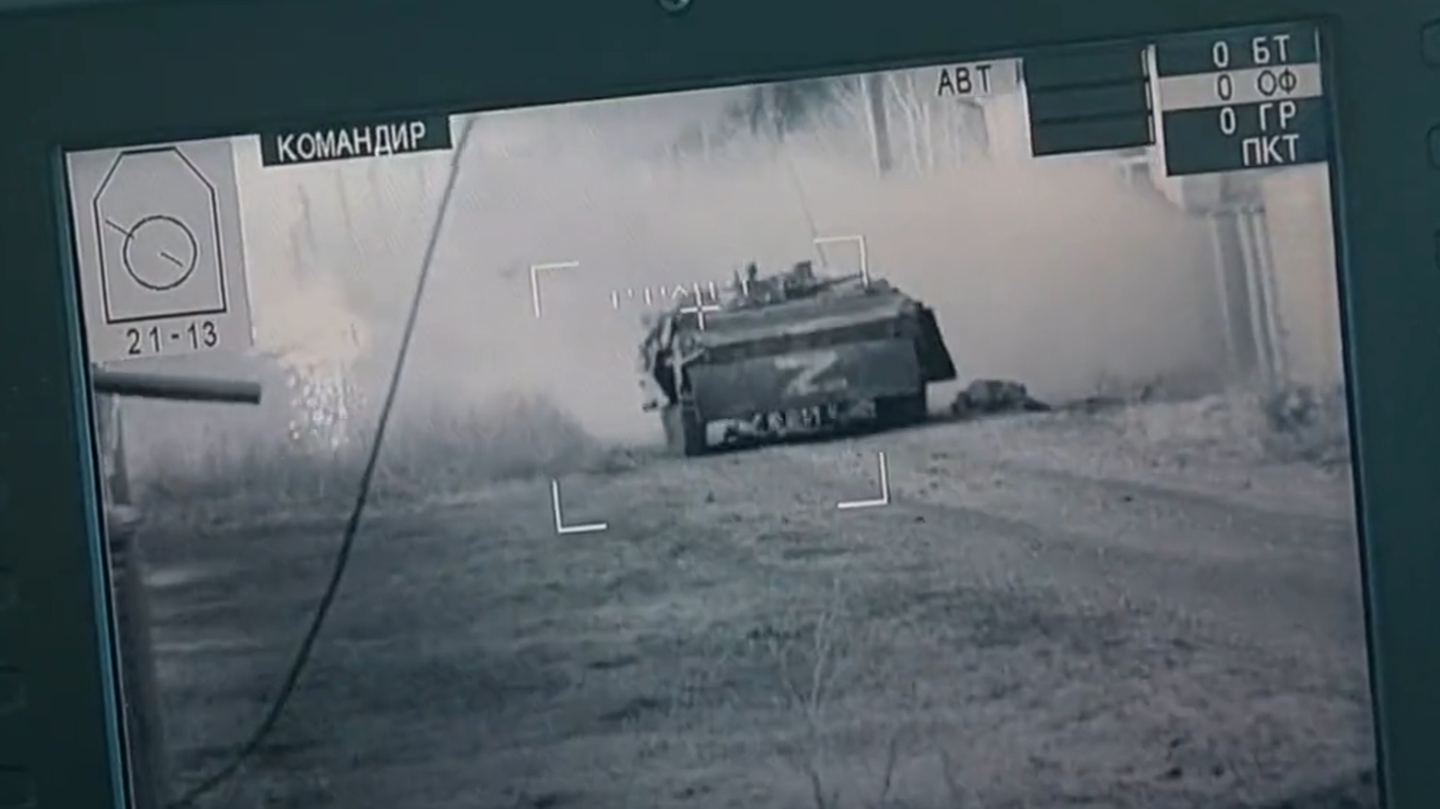 The Russian invasion of Ukraine, which has been described as the world’s first “TikTok War” is now in its third week. There are videos of cities like Kyiv and Kharkiv facing indiscriminate artillery bombardment. Hospitals are under siege and museums are emptying.

On a street in Mariupol, footage has emerged of Russian tanks and armored vehicles under fire from Ukrainian defenders.

Filmed from inside what is reportedly a Ukrainian BTR-4, an eight-wheeled vehicle roughly equivalent to a U.S. Army Stryker, we see an engagement with Russian mechanized forces.

In the video, the Ukrainian armored vehicle engages what appears to be a T-72 Russian tank, and a variant of a BMP, an infantry fighting vehicle that’s holds a similar role in the Russian military as the Bradley Fighting Vehicle does for the U.S. Army. It’s unclear from the video but it appears to show two separate engagements that have been cut together into one clip, rather than one fight that involved an encounter with a Russian tank and an infantry fighting vehicle.

In what looks like a suburban neighborhood, the Ukrainian vehicle maneuvers up and down a city street, firing on Russian forces. The two engagements both occur at uncommonly close range, with the first against the T-72 appearing to result in damage, though the extent is unclear. The second looks to be an almost one-sided shootout with the Russian BMP, and in it we see the Ukrainian vehicle crew open fire, first at a high elevation, then the gunner walks the sights down before they drop suddenly and the rounds appear to impact just in front of, or even under, the Russian BMP.

The change in elevation led some commenters online to speculate that the gunner was attempting to either skip rounds underneath the vehicle in the hopes of impacting its belly or that he was trying to thread the needle so that the rounds would impact at the rear of the BMP and hit the dismounted Russian soldiers taking cover behind it.

However, the reason may be far more simple: The shooter was overcorrecting.

“You’ll notice he started engaging high, then medium, then there’s a quick jerk low,” said Maj. Mike Liscano, an Army officer with 20 years experience in the field and who served as both a tank and Bradley Fighting Vehicle commander and is familiar with the armor shown in the clip.

“In actuality, he just overcorrected going down and he’s slowly walking the dog back up to fire center mass of that BMP up until we saw the internal combustion with those rounds hitting the engine and the engine exploding, confirming kill as you should in real combat,” Liscano said. “I don’t believe they were targeting the dismounts. I don’t believe they were trying to get shrapnel or ricochet shots, especially with that caliber — anything 25mm and above, that’s a waste of ammo.”

In any case, the video is a visceral example of what up-close armored combat looks like in this day and age.

“There’s two types of kills,” said one mechanized combat expert with more than ten years experience as an armor officer, “mobility and catastrophic.”

“That’s a catastrophic kill,” he added, referring to the moment when the rounds impact the BMP and strike the engine, resulting in a massive explosion.

“Priority goes to destroying the BMP because it has a weapon system that can destroy his vehicle system as well,” said Liscano, before using a slang term among tankers to refer to dismounted troops: “Then he can focus on the little crunchies around him.”