Around the world, while people were getting in the holiday spirit, the Marines of 1st Marine Division were in the... 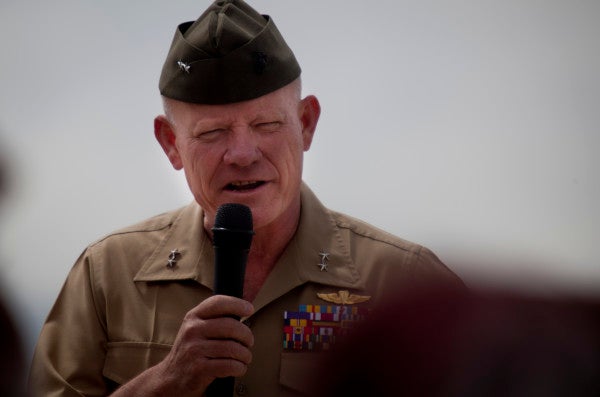 Around the world, while people were getting in the holiday spirit, the Marines of 1st Marine Division were in the field.

1st Marine Division’s Facebook page posted a video of its commanding general, Maj. Gen. Lawrence Nicholson, addressing the Marines participating in the field exercise near the holidays. The video is short, 48 seconds, but damn does Nicholson motivate during that time.

The Marines were executing Exercise Steel Knight, a massive effort that spanned Dec. 8-17 designed to hone the Corps’ ability to wage conventional warfare. All elements of I Marine Expeditionary Force, the Marine Corps’ West Coast component, were involved. This includes the ground combat element in the division, as well as Marine Corps aviation and logistical assets, according to a Marine Corps release on the exercise.

The exercise comes as the Marine Corps draws down from the conflict in Afghanistan, where along with Iraq, Marines have been conducting land-based counterinsurgency and counterterror operations for more than a decade. The exercise acknowledges a need for the Corps to hone its ability to wage conventional warfare, expeditionary warfare, and amphibious warfare.

But the exercise also comes in the middle of the holiday season. It wrapped up just a week before Christmas. Nicholson knows that it’s tough to send Marines into the field just before the holidays. His message to them thanks them for their support of the mission, enforces its importance, and acknowledges their work during the holidays.

It comes from one of the most badass and combat-decorated generals in the Marine Corps. An infantry officer by development, Nicholson has led Marines in combat in Ramadi and Fallujah in Iraq. He was seriously wounded by a rocket attack in Iraq in 2004 just days after arriving in the country. He recovered and returned to the country just months later in command of the 5th Marine Regiment. He went on to lead the surge of Marines in Helmand province, Afghanistan, in 2009.

In the video posted to Facebook by the 1st Marine Division, the tough, war-scarred general is curt and direct. He’s in a full battle kit, his kevlar helmet tucked casually under his arm. It’s unclear if the general is addressing the camera or a collection of Marines. He is not looking into the camera and his words do not appear scripted.

Nicholson goes on to say that he understands that it’s rough in the field, that it’s the week before Christmas, that the Marines are away from their families.

“The training that we’re getting as a fighting force can’t be duplicated, and we can’t do this anywhere else,” he says.

Good Marine leaders know when and how to speak to the morale of their troops, and it’s worth noting that he never uses the world “morale.”

There’s an Eisenhower quote that comes to mind: “The best morale exists when you never hear the word mentioned. When you hear a lot of talk about it, it's usually lousy.”

That’s what’s key about what Nicholson does here — he reinforces the mission, tells his Marines it’s important, and acknowledges that things are hard. He does not say things you hear bad military leaders say sometimes like “I need to keep morale up” or “we’ll do a morale building activity soon.”

Watch his speech below: