"The bottom line is you only get to resign once." 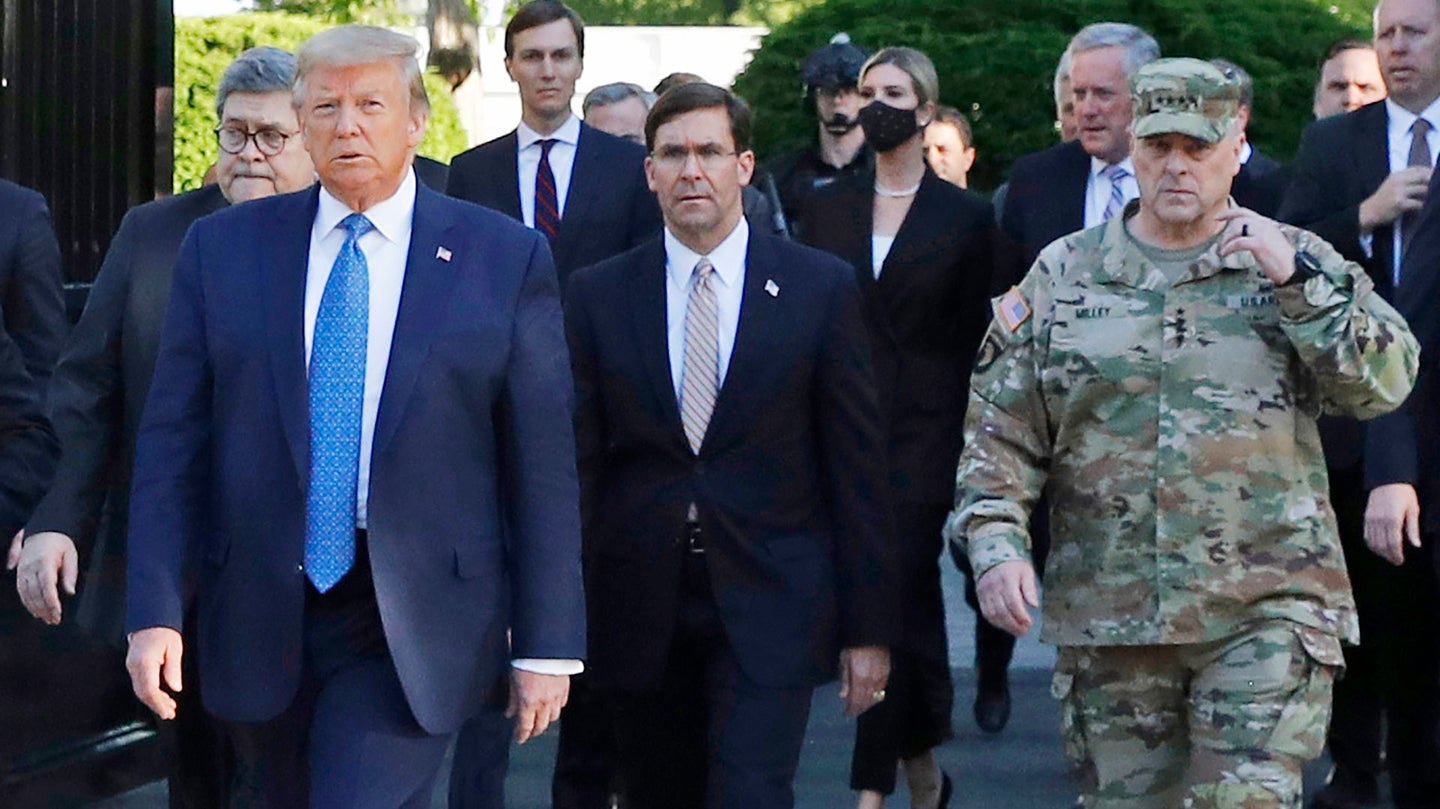 Former Defense Secretary Mark Esper says he realized in June 2020 that American democracy was in danger. His boss, then-President Donald Trump, had asked if U.S. troops could shoot people protesting George Floyd’s death at the hands of Minneapolis police.

Esper immediately regretted walking with Trump through Lafayette Park on June 1 for a photo opportunity after U.S. Park Police violently had cleared the area of protesters. Two days later, Trump berated Esper for telling reporters he did not support invoking the Insurrection Act so that active-duty troops could support the police in putting down protests. By the end of that tumultuous week, Esper reached some disturbing conclusions about the commander in chief.

Despite his misgivings, it would be nearly two years after that tumultuous summer before Esper publicly voiced his opinions on his former commander in chief, and like so many in public office, he did it with a newly released book.

“I soon came to fully realize that the president put his reelection above everything else and was willing to do whatever it took to stay in power,” Esper wrote in “A Sacred Oath: Memoirs of a Secretary of Defense During Extraordinary Times,“ which was published on May 10. “People were expendable, principles were pliable, and policies were changed to meet the needs of the moment.”

In a recent interview with Task & Purpose, Esper said his differences with Trump did not begin in the summer of 2020. They grew over time and they accelerated after Trump was found not guilty at his first impeachment. Still, Esper stayed at his post, unlike former Defense Secretary James Mattis, who resigned in December 2018 over Trump’s first decision to pull all U.S. troops out of Syria, which was later reversed.

Esper wrote in his memoir that it would have taken “something big” to have forced him to resign, adding that Mattis “took some flak after stepping aside over what some considered a minor issue.”

“The bottom line is you only get to resign once,” Esper told Task & Purpose. “You get a day or two days of news and that’s it. And the other thing I would say is this: We need good people to serve in our government. If good people don’t go into office, or if good people resign as soon as times get tough or as soon as people call for their resignation, all you’re left with are bad people or incompetent people.”

Now, nearly a year-and-a-half since Trump fired him, Esper said he believes he made the right call by deciding to remain defense secretary because he helped avoid possible wars with Venezuela and Iran; he also claims he helped stop Trump from invoking the Insurrection Act to use active-duty troops against protesters in Washington, D.C., and Portland; and he was able to ban the Confederate flag on military installations despite Trump’s objections.

Still, Esper said he often wrestled with the question about whether he should resign during his 18 months as defense secretary. His internal debate about whether to leave the Trump administration intensified after the events of June 2020.

He said he sought the advice of his wife, friends, and others including retired Army Gen. Colin Powell, former chairman of the Joint Chiefs of Staff, all of whom recommended he stay on.

“So, I thought – given the success I had in the previous 12 months pushing off bad ideas or pushing back against outlandish ones – that I was better positioned there to get us through the next six months and to the election, rather than walking away from the position and leaving it to a loyalist – or a group of loyalists, as we found – who could take the department and the country on any one of these outlandish ideas.”

For nearly 18 months after Trump fired him on Nov. 9, 2020, Esper did not speak publicly about his concerns that Trump was willing to do whatever it took to remain in office. Esper waited to reveal the extent of the dysfunction within the Trump administration until the release of his book earlier this month – which was delayed for several months because the Defense Department claimed the book included classified information, prompting Esper to sue the Pentagon.

One reason why he did not immediately speak out against Trump was he felt he had successfully navigated the Defense Department through the presidential election and he expected that Trump would eventually concede, Esper said.

“The bottom line was the election was over and I didn’t see what impact it would have at that point,” Esper said.

Esper acknowledged that he did not anticipate that Trump would refuse to concede and push his debunked claims that the election was stolen to the point where a pro-Trump mob attacked the U.S. Capital on Jan. 6, 2021, to try to prevent lawmakers from certifying the results of a democratic election.

“I did not foresee that, and if other people did, good for them, but I am not a clairvoyant,” Esper said. “I did not see that coming.”

Another reason why Esper said that initially kept quiet was that he was still bound by agreements with the Defense Department that limited what he could say at the time. In fact, defense officials took from May 2021 until January 2022 to conduct a security review of Esper’s memoir that ultimately allowed him to tell the story of his tenure at the Pentagon.

When asked if he waited until his memoir was published to criticize Trump to help book sales, Esper gave an emphatic no. He said that if he were just trying to make money, he would have resigned long before he was fired.

“It would have been more profitable for me to resign in the summer of 2020 and write a book,” Esper said. Just look at book sales now as compared to then. Look at John Bolton’s book as compared to Bill Barr’s or mine.”

Esper’s account of his tenure at the Pentagon is in stark contrast to how critics painted him at the time as a yes man who would accede to all of Trump’s ideas, including diverting funding from military construction and counter-narcotics programs to build a wall along the U.S./Mexico border.

Esper also appeared to struggle to keep up with Trump’s decisions in late 2019 to first withdraw most U.S. troops from Syria, only to reverse himself and have American service members stay in the country, nominally to protect Syrian oil fields.

By August 2020, Trump himself openly mocked his own defense secretary by referring to Esper by a demeaning nickname: “Yesper.”

Esper details in his book how Trump could have an explosive temper during meetings. Months after he was fired, he learned that an officer who attended one such meeting with the joint chiefs had been so shaken by Trump’s tirade that he started to read about the 25th Amendment to the Constitution, which allows cabinet members to remove an incapacitated president from office.

When asked if he personally felt that Trump was fit for office in the summer of 2020, Esper said: “The 25th Amendment is a high bar, where it talks about incapacitation. I didn’t see incapacitation in the president. I saw unpredictability, lack of principles, things like that. Incapacitation, I think, is something else.”

Moreover, while Esper said that Trump’s sole concern was remaining in power, “President Trump would not be the first elected official to put one’s reelection before everything else, but clearly when president, it has a particular impact,” Esper said.

With all of the above said, Esper offered a full-throated condemnation of how Trump tried to overturn the election after losing to President Joe Biden.

“President Trump threatened our democracy in the sense that he undermined the election after it happened – a free and fair election; he called people to D.C.; he stirred them up to go to Capitol Hill; they got to Capitol Hill, and they tried to interrupt the peaceful transfer of power; and then he failed to call them off in time. To me, that threatens our democracy. So, I am concerned about him running for office. I hope he won’t. Moreover, I hope he won’t get involved in the race as well.”