“We never got a parade. We just went home to our families.” 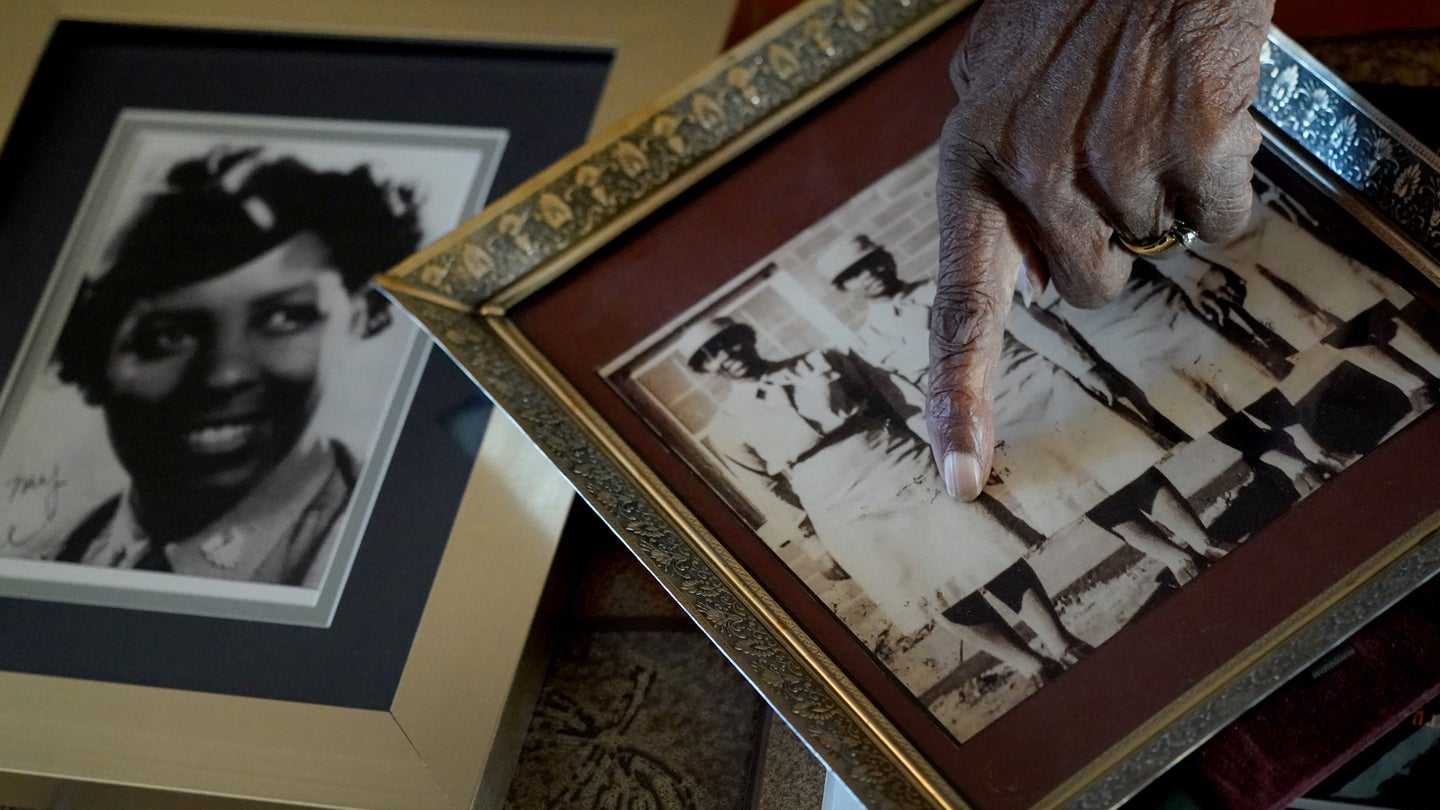 World War II veteran Maj. Fannie Griffin McClendon shows images of herself during her time in the military, Thursday, June 10, 2021, at her home in Tempe, Ariz. McClendon had a storied history as a member of the 6888th Central Postal Directory Battalion that made history as being the only all-female, black unit to serve in Europe during World War II. (AP Photo/Matt York)
SHARE

Decades after their trailblazing service, a battalion of Black women who served overseas in World War II could soon receive Congress’ highest award for distinguished achievements.

The Senate has approved legislation that would award the hundreds of women who served in the 6888th Central Postal Directory Battalion — nicknamed the Six Triple Eight — the Congressional Gold Medal, according to the Associated Press. The legislation is now awaiting action in the House.

Only seven veterans of the 6888th are believed to still be living, according to the AP.

The 6888th were instrumental in sorting out millions of pieces of mail in WWII, which began piling up in warehouses in February 1945 due to unclear labeling and “ever-changing locations,” according to the Army Center of Military History. The mail backlog resulted in service members deployed in Europe not being able to hear from loved ones back home, which Army officials said was hurting morale. The 6888th was created in November 1944 after African-American organizations urged the War Department to allow Black women with the Women’s Army Corps to serve overseas like their white counterparts.

The battalion was made up of 824 enlisted women and 31 officers — all Black women from the Women’s Army Corps, the Army Service Forces, and the Army Air Forces. It was commanded by Maj. Charity Edna Adams, who later became a lieutenant colonel. They were the only African-American women’s unit to serve overseas during WWII, according to the Army, with the exception of smaller units of nurses who served in Australia, England, and Africa.

The soldiers of the 6888th were trained at Fort Oglethorpe, Georgia, where they “learned to identify enemy aircraft, ships, and weapons; to climb ropes; to board and evacuate ships; and to do long marches with rucksacks.” On Feb. 3, 1945, the first group of soldiers from the battalion set sail for Britain from Camp Shanks, New York, their journey littered with “close encounters with Nazi U-boats,” per the Army. The second group arrived 50 days later.

Upon arriving in Birmingham, England — where they were deployed to “unheated, rat-infested airplane hangers” — Adams told the soldiers they would begin work immediately, the New York Times reported.

“As the newly created 6888th Central Postal Directory Battalion, their mission was neither glamorous nor particularly thrilling,” the New York Times said. “The work would be grueling, the hours long, and what little sleep they were allotted would be prone to interruption by air raids. Progress would be measured by the depletion of undelivered mail they had been summoned to England to sort out.”

And it was. All of the women worked in three eight-hour shifts, seven days a week. What others had anticipated would take six months, the 6888th completed in roughly three, processing an average of 65,000 pieces of mail every shift.

“They tracked individual service members by maintaining about seven million information cards including serial numbers to distinguish different individuals with the same name,” according to the Army. “The women dealt with ‘undeliverable’ mail which was sent to their location for redirection. They investigated insufficiently addressed mail for clues to determine the intended recipient, and they handled the sad duty of returning mail addressed to servicemembers who had died.”

The New York Times reported the 6888th was “operating the fastest and most reliable mail directory in the European Theater.”

Despite their success, the soldiers still faced segregation and racism in the Army and the country as a whole. At one point, Maj. Adams was “reprimanded by a colonel for ‘race mixing’ after accepting an invitation to a white Officers Club.” In another instance, according to the New York Times, the Red Cross prepared a segregated hotel in London for the soldiers while they were on leave, saying the “colored girls would be happier if they had a hotel all to themselves.”

Adams encouraged her soldiers not to stay there, and worked with other Black service members in London “to ensure her soldiers stayed only in integrated hotels.”

“What we had was a large group of adult Negro women who had been victimized, in one way or another, by racial bias,” Adams wrote in a memoir, according to the Times. “This was one opportunity to stand together for a common cause.”

At one point during the war, Adams was criticized by an American general who “appeared in Birmingham for a surprise inspection’ and was dissatisfied with low turnout, per the Times. When Adams explained that a third of the soldiers were still working, and another third was sleeping to prepare for their shift as they all worked around the clock, the general threatened to replace her with a white first lieutenant to “show you how to run this unit.”

She responded: “Over my dead body, sir.”

Adams “believed that she and her troops had been set up for failure,” the Times reported. The battalion was viewed as “an experiment” to “determine the value Black women brought to the military.”

Retired Army Col. Edna Cummings, who has advocated for the 6888th to receive recognition for their work though she was not a member of the battalion, told the AP the command of the Six Triple Eight knew that “their presence overseas meant more than clearing that mail backlog.”

“They were representing opportunity for their sisters at arms back in the United States who were having a hard time dealing with the racism and sexism within the ranks,” Cummings said.

After Germany’s surrender, the battalion traveled to France where they worked for several months sorting through more mail. In February 1946, they returned to the U.S. and were disbanded at Fort Dix, New Jersey, with “no parades, no public appreciation, and no official recognition of their accomplishments.”

Five decades passed after their return before the women of the 6888th received formal recognition for their work, according to the Times. The battalion was awarded the Meritorious Unit Commendation in 2019.

“We were never made to feel like anything we’d done was special,” one member of the battalion, Lena King, 97, said at the time. “We never got a parade. We just went home to our families.”