Life On A Submarine: Raunchy, Cramped, And Occasionally Smells Like Sh*t 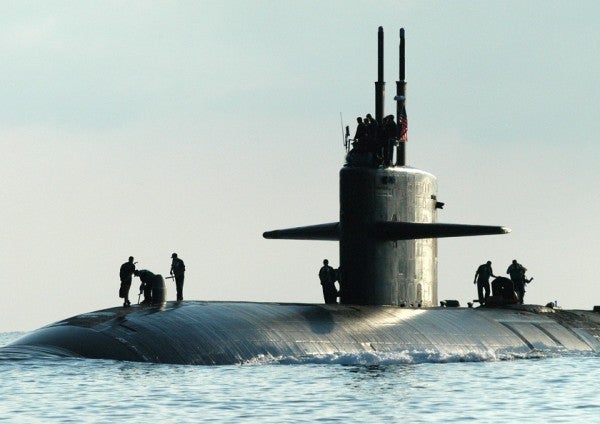 In the military, nothing breeds camaraderie better than adversity. The harder and riskier a job or mission, the tighter the bond that forms between those who endure it together. For Navy submariners, every day at sea and aboard ship brings with it a certain level of risk. They operate in world where disaster is narrowly averted by the smallest of margins, due in large part to the hard work and diligence of every sailor onboard. It’s a dangerous job in an unforgiving environment. Fortunately, submariners know how to relieve tension and they do it in spectacular fashion — from riding makeshift go carts down the ship’s passageways, to hilarious ceremonies and rites of passage.

Task & Purpose spoke with Walter Lyon, who served in the Navy from 2000 to 2010 as a ship’s diver and fire control technician, about what life is like on a fast attack submarine. Lyon spent more than 1,200 days at sea, as well as a year-long tour to Iraq as part of a military advisory training team. After leaving the Navy six years ago, he now works as a corporate training manager at an engineering firm. In his spare time he runs Diver Tough, an online community and podcast focused on sharing naval and maritime stories.

Lyon spoke about what it’s like to live in a submerged pressurized container, where to go for a little “private time,” what happens when the sanitation valves aren’t set up correctly, and what goes down when a submarine passes the equator — here’s a hint, there’s a ceremony involving cross-dressing, a fat guy’s belly button, and an M&M.;

What was the day-to-day like for you guys as submariners, and how much time do you spend at sea and what subs were you on?

… For any one period of time you’re out to sea, it really depends on food that you have. Once you run out of food, you obviously have to put into port. The longest we were out at sea without having touched land was probably 70 days. I’ve heard of some subs going 90 days, but once you start eating bread with ketchup on it it’s time to pull back into port.

Tell me what that’s like, 70 days in an enclosed pressurized container, can you describe that? What’s the environment like?

It’s interesting. …You’re basically stuck with a bunch of guys whether you like them or not. It’s about 130 guys onboard the submarine. It’s very very cramped. I’m a tall guy. I’m 6-foot 3-inches, so I’m bending over to get through the passageways and things like that, so a lot of times it’s really really tight quarters. You find out who your best friends are, and you find out who you stay away from.

So, it’s tough, man. Every square inch of space is taken up, so sometimes you’ll be sleeping next to a crate of eggs. Sometimes the rack that you’re in is right next to a torpedo. It’s really cramped. What you do is called hot-racking, which is three guys to every two beds and we say “it’s not gay, if you’re under way.” So you’re constantly switching out, so when one guy gets out of the rack it’s your turn to jump into the rack and all that’s separating the world is a little curtain that goes over your rack. These are all really narrow coffin racks. These are about 6-foot, 2-inches in length. In the rack, my feet are touching the bulkhead, my head is touching the other bulkhead, and there really isn’t a whole lot of privacy, but if you see the curtain rockin, don’t come a knocking. That’s happened several times. Guys will be guys, so you’ll have someone run through and open all of the curtains all at once just because. Yeah, guys will be guys. You know how it goes.

I mean, I asked that because on my deployments I was attached to an infantry battalion in Afghanistan and one group of guys was real up front about it and set up a “jack shack” and that’s exactly what it was for, it was a closet in the back of the compound and there was just a curtain.

I had an incident once. I was one of the divers on the boats so I had to secure everything topside before we submerged. I’m always the last guy to go down. We had literally just gotten underway; As soon as you get underway everyone turns off the lights and people try to start getting some sleep. I went down into the crew’s berthing, and it’s basically just a really narrow hallway with rack after rack after rack, and I flipped on the lights and every single curtain was rocking, and I just screamed “Oh my god, you guys couldn’t wait an hour?” and all of a sudden it just kinda stopped.

Are there any unit rituals, things that only submariners would do or could do?

What we have to do is we have to polish these trash weights. When we compact trash we have to put these weights in it so it sinks to the bottom. So, we take these rusty red weights and polish them to make them nice and pretty. We have wear them around our necks for a week and when we cross the equator they put us through the ritual of crossing a line, which basically culminates in us singing songs, crawling around on our belly, swimming in urine, and eating M&Ms; out of a fat person’s belly button.

I’ve gotta ask man — I’m not gonna let the story end right there — with eating M&Ms; outta the fat guy’s belly button, did you ever participate?

Oh yeah. You don’t turn that kind of opportunity down. What they had you do is they gave you this M&M; and that was your pearl. You had to hang onto it for the entirety of this ritual and you have to go around and they’re spraying you with water hoses and they’re dunking you in ice cold water that just so happens to be filled with urine, and you’re holding onto it and you’ll go into the ward room where the officers sit, and sitting there is the biggest fattest guy on the submarine, and he’s wearing a diaper and covered in whip cream, malt vinegar, mayonnaise, mustard — all the good stuff — and you have to place your pearl in his belly button and then retrieve it before becoming an honorary shellback.

Yeah, every military unit has something like this. You put a bunch of guys together for six months or more, and you get bored and gotta entertain yourself, especially when the job’s really tough.

Keeping with the real serious stuff, any horror stories about the toilets backing up? This isn’t something I’ve heard, I’m just curious about it.

No, I mean that’s a real serious problem. So, what we do is all the poop and all the excrement and all that stuff goes into the sanitary tanks. There’s three sanitary tanks onboard a submarine. So what you have to do to discharge it is you have to pressurize a sanitary pump that blows the sanitary waste outside of the boat. That does a couple things. It blows outside the boat and you can hear all the fish coming in off sonar, all the crabs and things going crazy and eating all the poop. But if the valve line-up isn’t correct, that poop will be sent somewhere else in the boat and one place we had pressurized poop go was into the kitchen, into the galley. The machinist mates, called A-gangers got the valve line-up wrong in such a way that the poop went through one of the deep sinks and sprayed the entire galley. In this case it was grey water, but it smelled like poop. It ruined pizza night for the sub.

It happens a lot. The toilets on a submarine are a lot different than anywhere else. … To flush the toilet you have to open up the fill valve, then there’s a ball valve — it’s a big lever that looks like a slot machine — you’ve got one of those for the shitters, and you fill it up and you watch the poop go down the hole, but if the sanitary tank is over-pressurized that poop can go backwards and shoot you in the face if you’re not careful.

What’s the craziest moment you have had on a submarine.

We do something called angles and dangles which is always fun. They take the ship on extreme turns, extreme angles basically. What we do is we get the most slippery material we can find and as the ship is going up and down at a 25 degree angle, which doesn’t sound like a ton, but when you have to hold onto things and dishes are going everywhere, it’s a lot of fun. We’ll do angles and dangles and we’ll jump on things and it’ll shoot us down the passageways. We’ll create go carts on the submarine. That’s always fun.