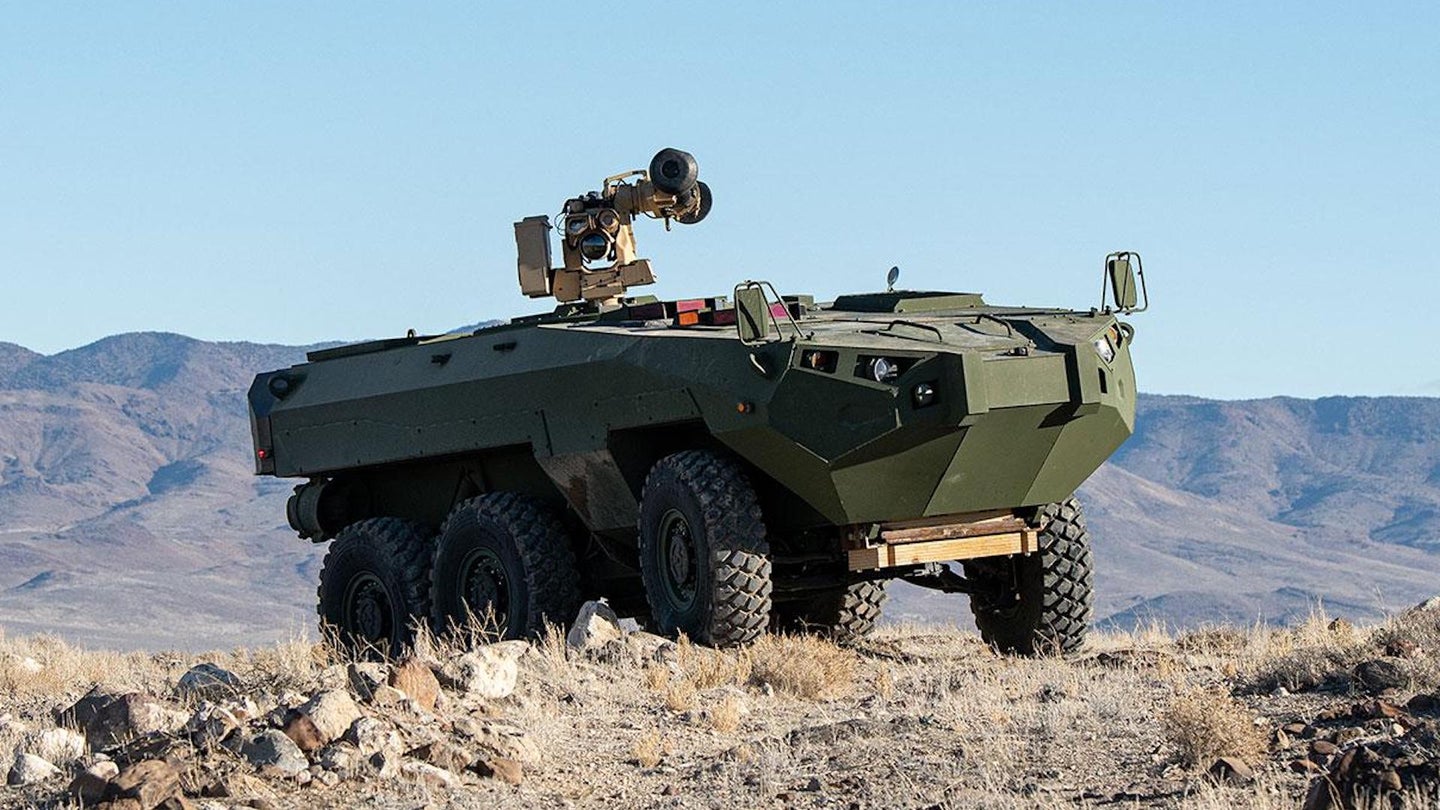 The Marine Corps has taken possession of what may end up becoming its next replacement for its family of amphibious reconnaissance vehicles that’s been in the service’s arsenal for four decades.

The ARV is intended as the successor to the Light Armored Vehicle (LAV)-25 that’s been a mainstay of the Marine Corps’ light armored recon battalions since 1983, a vehicle the Government Accountability Office recently designated as the most accident-prone in the service’s fleet.

The service announced in July 2021 that Textron and General Dynamics Land Systems (GDLS) would develop ARV prototypes for evaluation, with an eventual contract for equipping units with a targeted 533 vehicles worth an estimated $1.8 billion to $6.8 billion over five years, according to a recent Congressional Research Service.

Billed as a “naval sensor node” for expeditionary operations by Textron, the Cottonmouth was designed explicitly to provide a multi-domain command and control suite to allow the ARV “to coordinate data and serve as the quarterback, or battlefield manager, for the modern battlefield,” according to the company.

While technical details on the Cottonmouth are scant, Textron’s spec sheet indicates the vehicle comes armed with “advanced full-spectrum reconnaissance and surveillance sensors” and a lighter footprint to allow four vehicles to fit on a U.S. Navy air-cushioned Ship-to-Shore Connector in line with previously-released Marine Corps requirements for the ARV.

“Our Cottonmouth vehicle is a completely clean-sheet design that provides transformative reconnaissance capabilities and meets Marine Corps requirements,” said Textron senior vice president David Phillips. “Because of its smaller size, the Marines can quickly deploy next generational combat power to the fight and lets commanders meet any mission anywhere.”

Some of the Marine Corps’ desired core operational capabilities for the ARV include, according to the CRS report: an automatic medium-caliber cannon weapon system, anti-armor capability, precision-guided munitions, unmanned systems swarm capabilities, electronic warfare capabilities, the aforementioned command-and-control suite, and ground and aerial drones deployed from the vehicle.

In other words, the Corps wants an amphibious scout vehicle bristling with anti-tank missiles, loitering munitions, and drone sensors that can play quarterback during the next big war in the Pacific.

The Cottonmouth now enters a formal government evaluation phase that is expected to last through 2023, according to Textron, an evaluation that will likely see the company’s ARV prototype joined by GDLS’s own offering some time in December.

The evaluation of the two companies’ ARV prototypes comes amid a broad reorientation of the Marine Corps under the service’s “Force Design 2030” plan, which has seen the Corps become lighter and more nimble as it pivots from austere campaigns in the Middle East toward countering neer-pear adversaries in the Pacific, ditching its tank battalions, standing up new “littoral regiments,” and refocusing on reconnaissance to deal with new threats.

The ARV “is imperative to realizing Marine Corps requirements for Fleet Marine Force 2030,” the service recently wrote of the vehicle, per Breaking Defense. “As part of the portfolio of reconnaissance, surveillance, and target acquisition systems, ARV will be a purpose-built combat vehicle system, highly mobile on land and water, that can sense, communicate, and fight as the manned hub of a robotic and autonomous systems-enhanced team.”

Despite the service’s much-discussed pivot to the Pacific, the future of the ARV in the service’s fleet of combat vehicles is far from certain. According to the CRS, Marine Commandant Gen. David Berger has repeatedly stated that while all-domain recon capabilities will prove “critical” in a future conflict, he remains “unconvinced” that “additional wheeled, manned armored ground reconnaissance units are the best and only answer.”

“The 12 Light Armored Reconnaissance (LAR) companies identified in the objective force in the initial Force Design Report must be re-evaluated in light of the emerging concept of multi-domain mobile reconnaissance,” the service wrote in a 2021 force design update. “This may affect the overall requirement for armored land mobility in the form of the [ARV].”

Indeed, in a more recent May force design update to Defense Secretary Lloyd Austin, Berger directed the Corps to “[r]eview and validate all assumptions regarding programmed or potential future capabilities, such as the Amphibious Combat Vehicle (ACV)-30 and Advanced Reconnaissance Vehicle (ARV),” a move that suggests the ARV may not end up proving the best recon solution for the service.

Berger’s comments came as BAE Systems, makers of the ACV-30, proposed that the service simply adopt the new ACV — itself a replacement for the Corps’ decades-old fleet of Amphibious Assault Vehicles — to fulfill the service’s reconnaissance needs rather than going with a “new-start” platform for the ARV.

According to the CRS report, the Corps “will also examine if a modified

[ACV], currently being fielded to Marine units, might be adapted for use as an ARV” as the service continues testing the Textron and GDLS prototypes through 2023.

It is unclear when the Marine Corps might announce a full contract for the ARV. The vehicle is planned to enter service sometime in the mid-2030s after it reaches full operational capability — roughly a half-century after the LAV was first fielded.