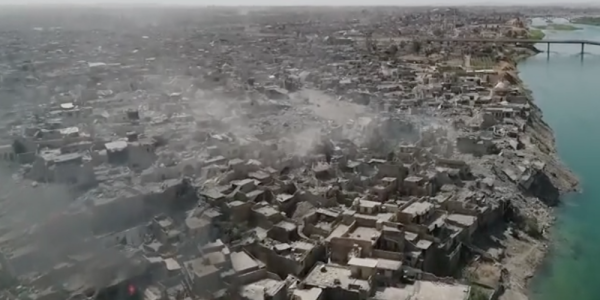 About 915,000 people have fled the city since the battle began in October 2016, and thousands more were killed at the hands of ISIS and US coalition airstrikes.

Now the city lies in utter ruin after years of ISIS attacks and U.S.-led coalition bombings.

The jihadist group took control of Mosul in June 2014, and immediately burned the city's library and historical documents.

ISIS then destroyed the Sheikh Fathi mosque, despite civilians forming a human chain around the site to protect it. ISIS destroyed the historical tombs of Nebi Yunis and Nabi Jerjis and many other historical sites. Most recently, when coalition forces were poised to take back the city, they blew up the ancient Great Mosque of al-Nuri, where ISIS first declared its caliphate in 2014.

The UN has estimated that it will cost about $1 billion to rebuild the city's infrastructure.

Downtown Mosul in 2008, years before ISIS invaded the historic Iraqi city.Photo via DoD

And this drone footage shows what Mosul looks like now: