don't tread on me

With the federal government still shut down over funding for a wall on the U.S.-Mexico border, the President Donald Trump floated an unusual proposition on Friday: Let's just seize a bunch of privately-owned land and have the U.S. military build a wall without those pesky lawmakers in Congress getting in the way.

"You have to use eminent domain," he added. "If we had one person that wouldn't sell us...then we wouldn't be able to build proper border security because we'd have that big opening."

Trump isn't totally wrong. While the federal government has invoked the principle of eminent domain to build public utilities like roads and highways for decades, the "military version" Trump mentioned likely refers to 10 U.S. Code § 2663, which provides for the acquisition of land for military purposes including "construction, or operation of fortifications, coast defenses, or military training camps."

But at the same time, there are two elements here which may complicate this approach to expediting the construction of a border wall.

The first is that pesky "national emergency." The United States has technically been in a state of national emergency since three days after 9/11, initially declared by President George W. Bush and extended by both President Barack Obama and Trump. It's unclear if Trump actually needs to declare a new emergency since 10 U.S. Code § 2663 technically applies to a "time of war or when war is imminent," which almost certainly defines the current national security posture of the United States.

The second is more broad: Trump is proposing that U.S. service members deploy to states around the southern border and snatch up land for wall construction — which, if I'm not mistaken, sounds not unlike the insane conspiracy theories that cropped up back in 2015 during the now-notorious Jade Helm military exercise. 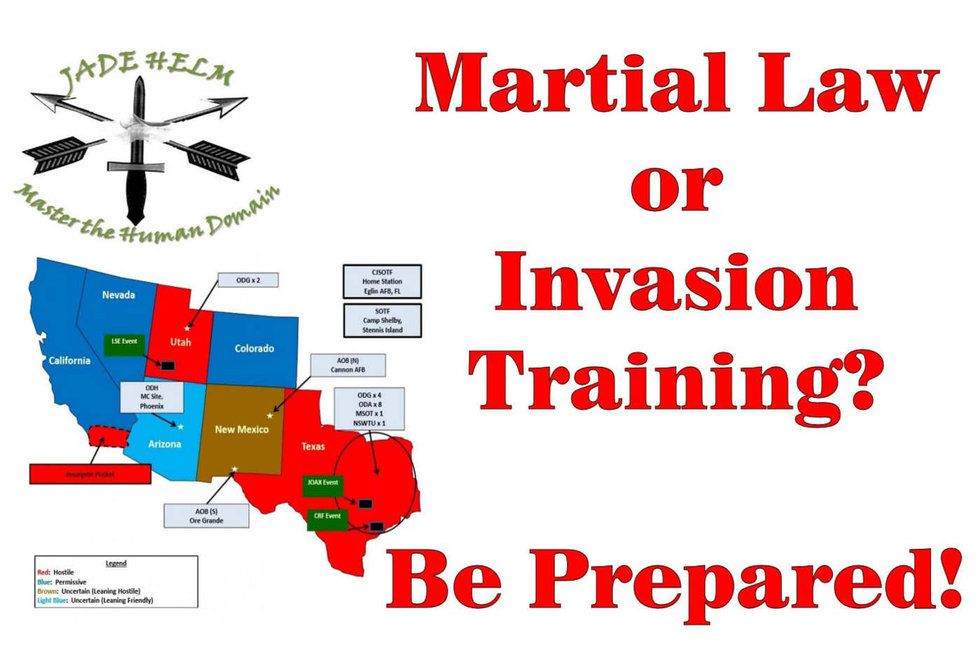 After U.S. Army Special Operations Command sent thousands of troops to the American southwest for the totally normal eight-week training exercise Jade Helm 15, Texas Gov. Greg Abbott ordered the state's volunteer guard to keep en eye on U.S. service members to ensure that this wasn't some Obama-era precursor to martial law. The theory became so widespread that Texas' own lieutenant governor David Dewhurst had to blast his fellow conservatives in an open letter that "suspicion of our fellow troops must stop."

That conspiracy theory, it turns out, was totally false, fueled by Russian bots with a healthy dose of inflammatory fear-mongering from alt-right media.

"Russian bots and the American alt-right media convinced most – many – Texans that Obama planned to round up political dissidents, and it got so much traction that the governor of Texas had to call up the [state guard] to observe the federal exercise to keep the population calm,' former NSA chief Michael Hayden revealed in May 2018.

Obama put it best 2016. "Really? You think that, like, the entire Pentagon said, 'Oh really, you want to declare martial law, take over Texas, let's do it under the guise of routine training missions.'"

Still, it's unnervingly strange to see such an entirely fictional prospect like the 2015 Jade Helm federal "invasion" get treated as fact while Trump's explicit declaration that, yes, he may declare a national emergency and send U.S. troops to seize land for a border wall go over without any major freakout from the usual circles.