UNSUNG HEROES: The Green Beret Who Killed 4 Enemy Fighters, 1 With His Hands

In January 2002, less than four months after the official launch of Operation Enduring Freedom, before conventional forces were deployed … Continued 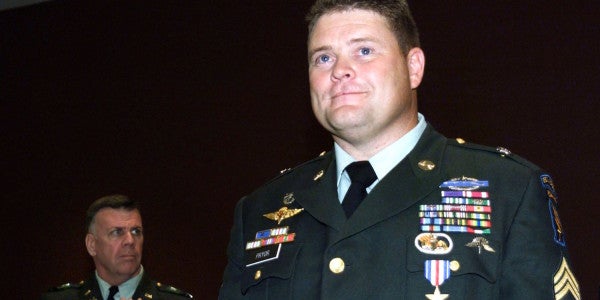 In January 2002, less than four months after the official launch of Operation Enduring Freedom, before conventional forces were deployed beyond the confines of Kabul, the so-called Global War on Terror was almost exclusively waged by a small group of commandos in the remote mountains, deserts, and villages of Afghanistan.

Master Sgt. Anthony S. Pryor of Company A, 1st Battalion, 5th Special Forces Group was one of those commandos.

On Jan. 23, 2002, Pryor’s detachment received orders from U.S. Central Command to conduct a night raid on a suspected al-Qaeda compound in a remote area of southern Afghanistan.

Their mission was to take over an old school house while the enemy fighters slept. But almost as soon as they entered the compound, their position was compromised, and they found themselves under intense gunfire, some of it from less than 25 meters away.

“After the initial burst of automatic weapons fire, we returned fire in the breezeway,” Pryor’s teammate, Sgt. 1st Class Scott Neil, told an Army reporter. “It was a mental spur – after we heard the words ‘let’s go,’ everything just kind of kicked in.”

Related: The Army Ranger who beat down a suicide bomber with his fists »

The commandos scattered in the confusion. Undeterred, Pryor and a teammate pushed forward under fire. As the two men turned to enter a room, an enemy fighter charged through the doorway. Pryor dropped the man and moved into the room alone while his teammate stopped to engage another man outside.

“I went in, and there were some windows that they were trying to get their guns out of to shoot at our guys that hadn’t caught up yet,” Pryor told an Army reporter. “So I went from left to right, indexed down and shot those guys up. I realized that I was well into halfway through my magazine, so I started to change magazines. Then I felt something behind me, and thought it was – that’s when things started going downhill.”

Something hard struck Pryor on the back, breaking his clavicle and dislocating his shoulder. He crumpled to the floor.

“[He] jumped on my back, broke my night-vision goggles off and started getting his fingers in my eyeballs,” Pryor recalled. “I pulled him over, and when I hit down on the ground, it popped my shoulder back in.”

Back on his feet, Pryor squared off with his attacker. Then, using only his hands, he killed him. But the fight wasn’t over yet.

“I was trying to feel around in the dark for my night-vision goggles, and that’s when the guys I’d already killed decided that they weren’t dead yet.”

Pryor raced to bring his rifle up while the two wounded men did the same. Moments later, Pryor emerged from the room, leaving four dead enemy soldiers in his wake.

“As soon as he left that room, he came running up to me and wanted to know if everybody was okay,” Neil recalled. “He never mentioned anything about what went on … and during the whole objective and as the firefight continued, he never stopped.”

By the time the dust settled, 21 enemy soldiers had been killed and all of the Americans were alive.

Several years later, in 2007, Pryor was awarded the Silver Star for his actions that night. During the ceremony, Maj. Gen. Geoffrey C. Lambert, commanding general of the U.S. Army Special Forces Command, said, “This is the singular hand-to-hand combat story that I have heard from this war. When it came time to play, he played, and he did it right.”