That time Pepsi promised to give away an actual fighter jet

The cola wars were real. 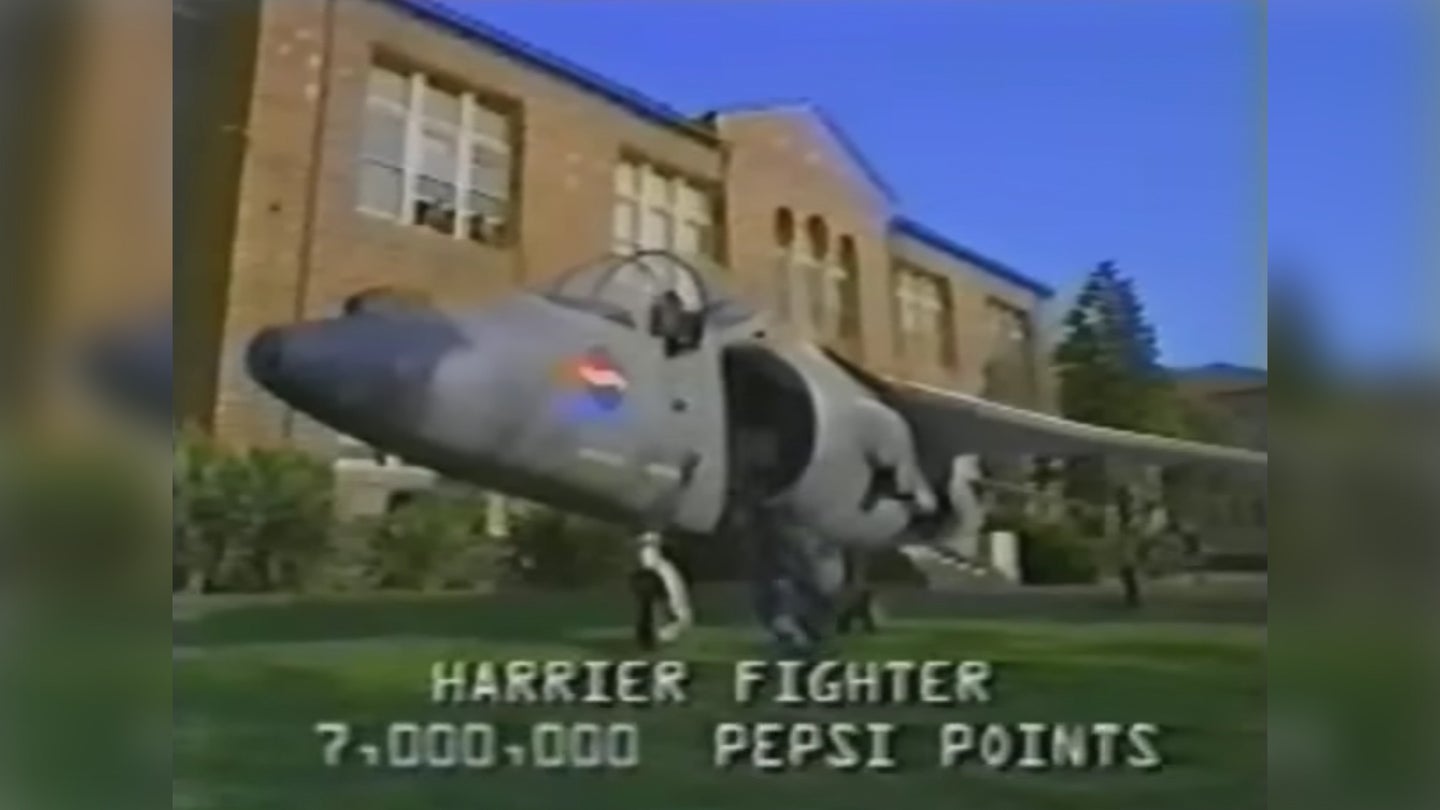 When you’re Pepsi, and you’re marketing against Coca-Cola, it pays to use some flashy advertising. Like, for instance, a commercial saying that enough “Pepsi Points” would get you a McDonnell Douglas AV-8B Harrier jet.

The offer, of course, was fake, but that didn’t stop one man from actually trying to redeem the offer and take Pepsi to court to get his jet. Yes, this really happened, and it’s now the subject of a Netflix documentary, Pepsi, Where’s my Jet?, set to premiere on the streaming service on Nov. 17.

Back in 1995, Pepsi was introducing the “Pepsi Stuff” promotion. The premise was simple — buy Pepsi products, earn “Pepsi Points,” and redeem them for stuff like a shirt or a mountain bike. To get the point across, Pepsi ran this commercial, which ends with one avid Pepsi drinker arriving at his school in a Harrier jet.

For those who are thinking “well, this is obviously fake,” the offer is right there — for 7,000,000 Pepsi Points, get a Harrier jet.

A 21-year-old Seattle resident named John Leonard saw the commercial and got to scheming. Obviously, drinking his way into Harrier ownership was not an option. It would have taken buying 1.4 million 12-packs of Pepsi to do so. Leonard, however, found a loophole in the Pepsi Points system — the points could be purchased directly for 10 cents apiece.

Instead of a Harrier jet, Leonard received a letter letting him know that “The Harrier jet in the Pepsi commercial is fanciful and is simply included to create a humorous and entertaining ad. We apologize for any misunderstanding or confusion that you may have experienced and are enclosing some free product coupons for your use.”

For Leonard, this was apparently unacceptable, and he decided to take legal action against Pepsi. The company countered, saying it was a frivolous claim to actually believe the commercial. They even questioned his commitment to the cola brand, with one executive saying, “Someone who’s taking advantage of the legal system doesn’t really typify the Pepsi generation.”

A CBS news report at the time found that public sentiment was generally on Leonard’s side, but after three years in court, Pepsi ultimately won the legal battle.

“The callow youth featured in the commercial is a highly improbable pilot, one who could barely be trusted with the keys to his parents’ car, much less the prize aircraft of the United States Marine Corps,” wrote the judge in the decision. “Rather than checking the fuel gauges on his aircraft, the teenager spends his precious preflight minutes preening. The youth’s concern for his coiffure appears to extend to his flying without a helmet. Finally, the teenager’s comment that flying a Harrier Jet to school “sure beats the bus” evinces an improbably insouciant attitude toward the relative difficulty and danger of piloting a fighter plane in a residential area, as opposed to taking public transportation.”

So, no Harrier jet for Leonard, although Pepsi did ultimately edit the commercial, changing the number of Pepsi Points needed to 700 million.

The lesson? Don’t believe everything you see on television.