When we come across this sweetheart in the wild, well, we just had to stop and take notice. 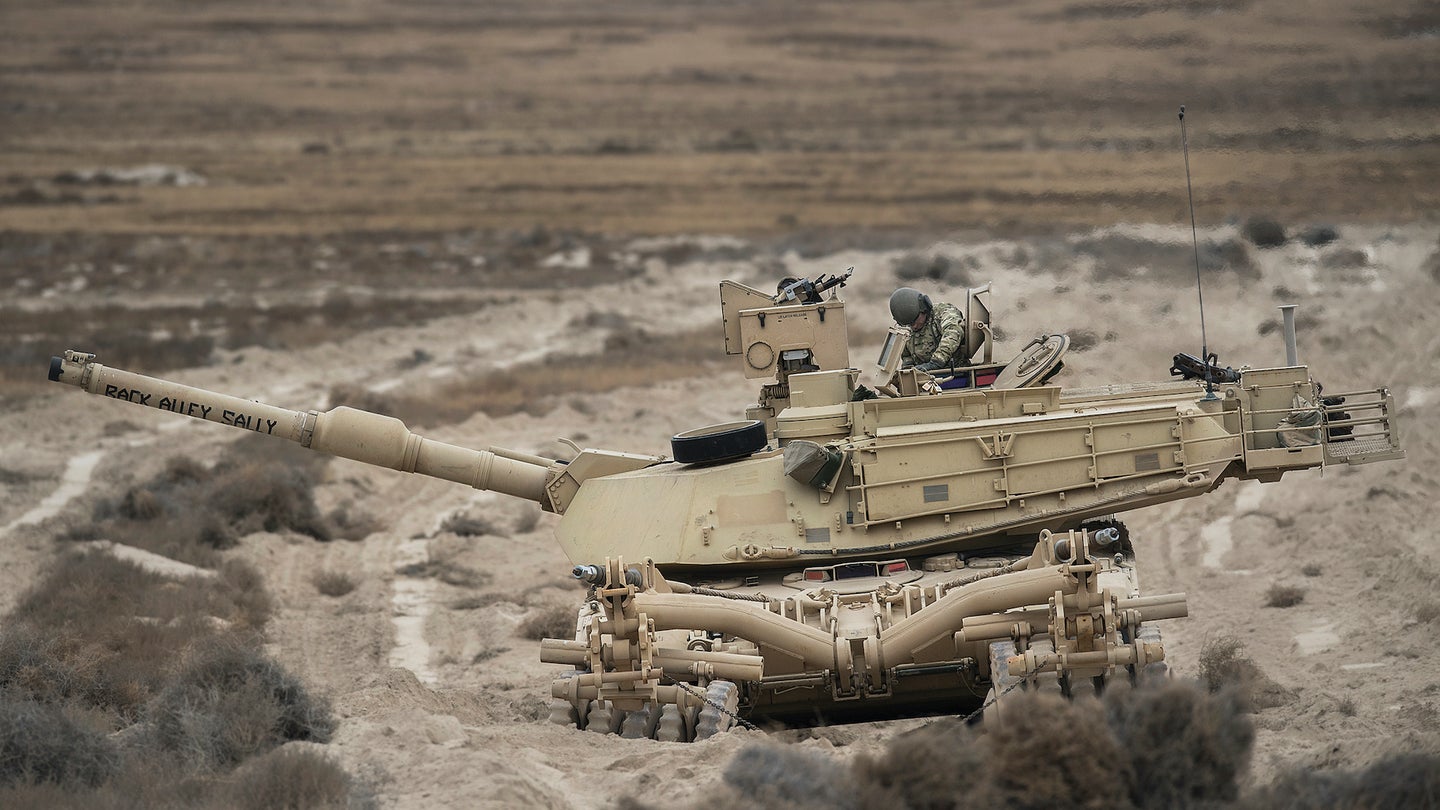 Waiting for a crew to get ready and go. Out of Nampa, Idaho, the members of B Company, 2-116th Combined Arms Battalion (CAB), from the Idaho Army National Guard's 116th Cavalry Brigade Combat Team (CBCT), bridged a 20-year gap in their units training history this November. For the first time in about 20 years, the company reacquainted themselves with the use of tank mine plows and mine rollers. A mine plow is a tank-mounted device designed to clear a lane through a minefield, allowing other vehicles to follow. Buried land mines are plowed up and pushed outside the tank's track path or tipped over. Since modern anti-tank mines rely on a focused explosion to destroy a tank, they are useless when turned upside-down. As the tank runs over the mine, it will expend its blast down instead of upwards, causing insignificant damage, if any. Mine rollers are companion devices working in tandem with tank mine plows or in some instances armored personnel carriers. Rollers are designed to detonate anti-tank mines. The mine roller allows engineers to clear a lane through a minefield which is protected by enemy fire. The roller devices are usually composed of a fork or two push arm assemblies fitted to the front of a tank hull, with two banks of rollers that can be lowered in front of the tank's tracks. Each roller bank has several heavy wheels studded with short projecting steel girders. They apply a higher ground pressure than the tank's tracks. This ensures the explosion of pressure-fused anti-tank mines, which would otherwise explode under the track itself. Formerly designated as a reconnaissance troop, B Company was reorganized to a Combined Arms Battalion in 2016. It has been in Nampa, Idaho since 2007. Nampa is approximately a 30 minute drive west from the main gate of the Idaho Army National Guards Brigade Headquarters on Gowen Field in Boise.
SHARE

If there’s one thing we absolutely love here at Task & Purpose, it’s an aptly-named Army tank. From the whimsical (Barbie Dreamhouse) and the topical (Baby Yoda) to the honorary (Chuck Norris) and belligerent (Dropped As A Baby), the ingenuity and humor of the service’s elite classes of tankers knows no bounds.

Related: How to crack a tank, WWII style

So, of course, when we come across a sweetheart like “Back Alley Sally” in the wild, well, we just had to stop and take notice.

Now, in terms of raw creativity, ‘Back Alley Sally’ is certainly among one of the more unusual tank names we’ve encountered while scouring DVIDS late at night. But what exactly is, a ‘back alley Sally,’ you might be asking? It sounds horrible, frankly, like a derogatory nickname for a promiscuous peer or an overly-creative, never-used sexual maneuver.

According to the official tome of American slang known as Urban Dictionary, “back alley Sally” has three frequently-used definitions:

Despite this, I’m convinced that this particular tank name has a more specific origin: a tribute to the beloved 1981 song by the same name by 38 Special about a crazy-eyed femme fatale and apparent sex worker. And since nobody’s around to tell me otherwise, I’ll just leave this here:

Here’s to you, crew of the Back Alley Sally: may all your missions prove fruitful and fearsome ensconced in your tank’s metal bosom.