That's right, the Air Force has officially approved five-year shaving waivers for airmen with Pseudofolliculitis Barbae — a medical condition that causes painful ingrown hairs and is acerbated by shaving. 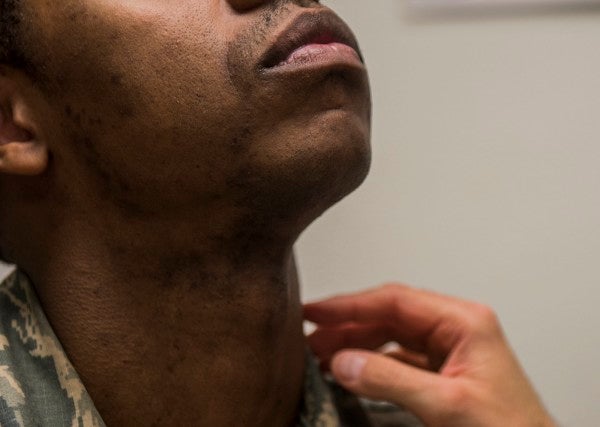 That's right, the Air Force has officially approved five-year shaving waivers for airmen with Pseudofolliculitis Barbae — a medical condition that causes painful ingrown hairs and is acerbated by shaving.

In a June 18 memo, Lt. Gen. Dorothy Hogg, the Air Force Surgeon General, authorized the waivers after receiving feedback from airmen, according to a June 23 press release.

Previously, the policy for shaving waivers for Pseudofolliculitis Barbae had to be updated annually, but under the new guidance, they can now be valid for up to five years, regardless of whether an airman is deployed, or moves to a new duty station.

The change is designed to allow more time for the skin to heal, and to prevent new breakouts of bumps and ingrown hairs.

According to the release, “once diagnosed with PFB, members are instructed on proper shaving methods to prevent a recurrence. Red bumps associated with this condition can cause a secondary infection and excessive scarring. PFB is most common in men with hair that curls when cut.”

Now, while the news may seem like a boon for anyone looking to rock a sick viking beard, or to test the mettle of their hair follicles in an international beard-growing competition, it's still the military.

So, unsurprisingly, the policy mandates that facial hair must be grown out naturally, can't exceed one-quarter of an inch, and strictly bars any shaping or styling. Additionally, beards cannot interfere with personal protective equipment, such as donning a gas mask and ensuring a proper seal.

Still though, I'm sure there are plenty of Marines, soldiers, and sailors who are envious that somewhere out there is an airman who might just be able to go a whole enlistment without ever having to shave.

RELATED: By the hammer of Thor! A Nevada National Guard soldier can now rock a Norse beard