Devout male Sikhs are required to have beards and wear turbans. 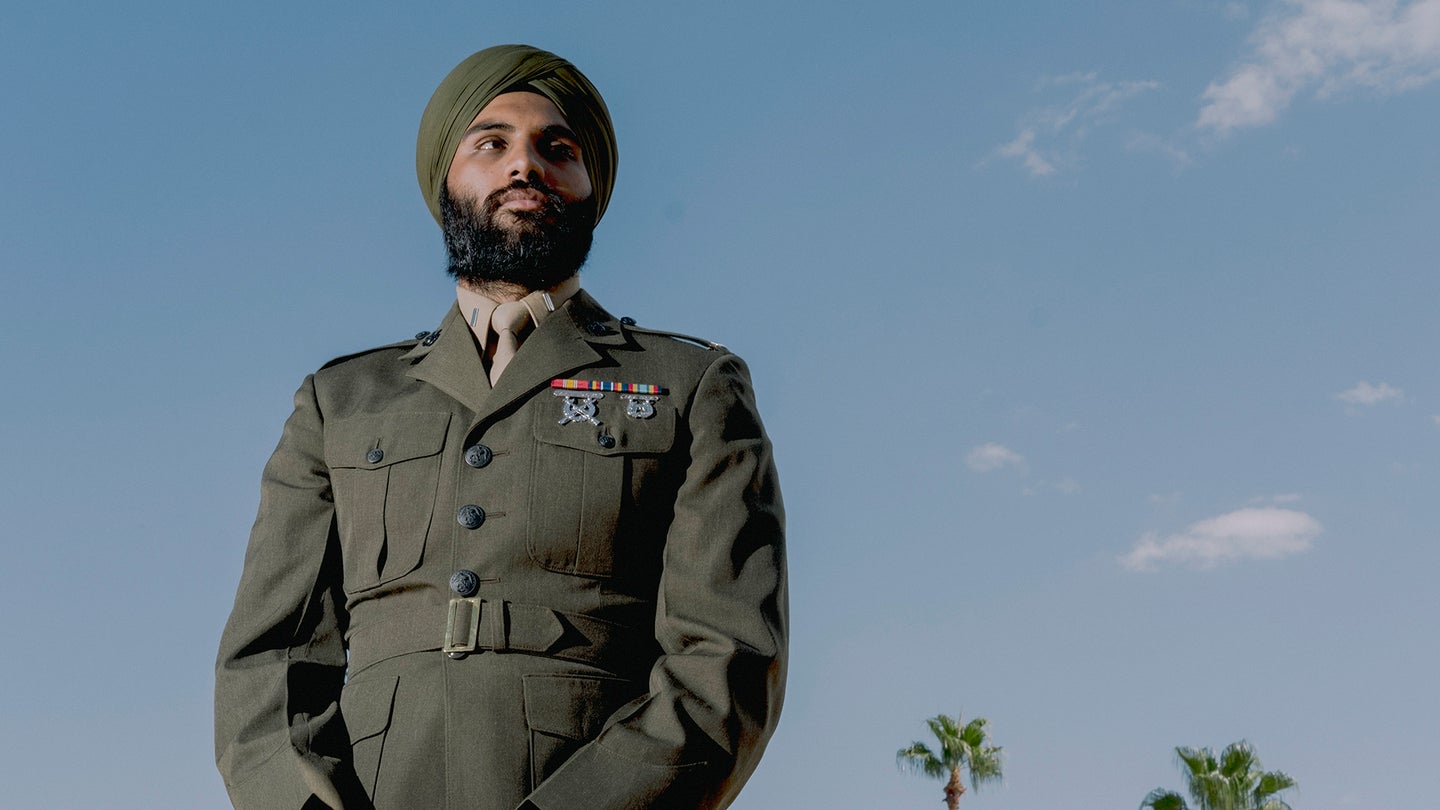 Marine Capt. Sukhbir Singh Toor, pictured as a lieutenant, has sued the Marine Corps for his right to wear a beard in combat zones. (Mark Abramson/The Sikh Coalition.).
SHARE

A Sikh Marine artillery officer and three prospective Marines have filed a lawsuit against the Marine Corps for the right to wear their beards in combat zones and at boot camp respectively, according to an advocacy group for Sikhs in the U.S. military.

“Treating a Sikh’s beard, a core tenet of the faith, as merely optional is unacceptable,” Giselle Klapper, the senior staff attorney for The Sikh Coalition, said in a news release. “It is time for the USMC to recognize what the U.S. Army, U.S. Air Force, and armed forces around the world already know: Articles of faith do not preclude Sikhs from capable military service.”

The Sikh faith requires both men and women to have unshorn hair. Devout male Sikhs are required to have beards and wear turbans. While Sikh soldiers fought in the British-led Indian army during World Wars I and II, some observant Sikhs in the U.S. military have been at odds with their service’s grooming standards.

Marine Capt. Sukhbir Singh Toor was granted a partial religious accommodation in June 2021 that allows him to wear a turban and beard when not deployed to a combat zone. In his lawsuit, Toor argued that the caveat on his religious accommodation is unfair because although he is not required to serve in a combat zone, it is “a career differentiator for a Field Artillery Officer.”

His attorneys also argue that the Marine Corps’ concern that Toor could not get a gas mask to seal properly if he deployed to a combat zone with his beard is negated by the fact that Toor’s beard and Turban did not prevent him from properly wearing his mask during gas chamber training and there is little risk of exposure to chemical, biological, and radiological weapons in several combat zones.

If Toor were deployed to a combat zone and refused to shave his beard, he could be charged under the Uniform Code of Military Justice with failing to obey an order, the maximum punishment for which includes dismissal and two years in prison, the lawsuit says.

“I have proven my commitment to the Corps through my four years of service, and I’m ready to deploy just like any other service member,” Toor said in a statement. “I can’t do that, however, as long as I’m left on the bench because of my religious beliefs. I’m prepared to fight for the right to do my job while staying true to my faith with no caveats, asterisks, or discriminatory restrictions.”

“Milaap Singh Chahal and Aekash Singh were candidates for the DEP [Delayed Entry Program], and began the process to be contracted, but they ultimately weren’t allowed to sign a contract unless they agreed to removing their articles of faith for boot camp,” Klapper told Task & Purpose.

Attorneys for the three men argue that the Marine Corps claims they cannot have beards during recruit training due to “a need for uniformity,” and yet Marines diagnosed with the painful skin condition pseudofolliculitis barbae — also known as “razor bumps” — can request a medical waiver so they don’t have to shave.

The Marine Corps referred questions about the lawsuit to the Justice Department, which declined to provide a comment for this story.

Army Reserve Lt. Col. Kamal S. Kalsi, head of the Sikh American Veterans Alliance, was allowed in 2009 to wear his beard and turban during military training, making him the first Sikh in a generation to receive such a religious accommodation.

Kalsi, who stressed that he was stating his own personal beliefs and not speaking on behalf of the Army or Defense Department, said the Marine Corps has been the least willing of the military branches to grant Sikhs with religious accommodations for their beads and turbans.

Regarding the Marine Corps’ hesitancy to let Toor wear his bead in a combat zone, Kalsi pointed out that U.S. special operations forces are famous for donning beards downrange.

He also noted that the Army and Air Force also require recruits to have short haircuts, yet they have allowed Sikhs to wear their turbans and beards during basic training.

“When I was going through boot camp, they break you down and they then help build you up as a part of the unit,” Kalsi told Task & Purpose. “I was able to do that with my turban and beard. I never had an issue and all the Sikhs that have been through boot camp in the Air Force as well haven’t had any issues. So, the concepts are the same. The Marine Corps didn’t come up with this concept of unity. It’s there in the Army and the Air Force.”

Correction: A previous version of this story included a picture that was not of Lt. Col. Kamal Kalsi. This story has also been updated to make clear that Aekash Singh wants to join the Marine Corps Reserve.