“Following an exhaustive investigation, authorities determined that the statements published did not occur and the text messages were fake.” 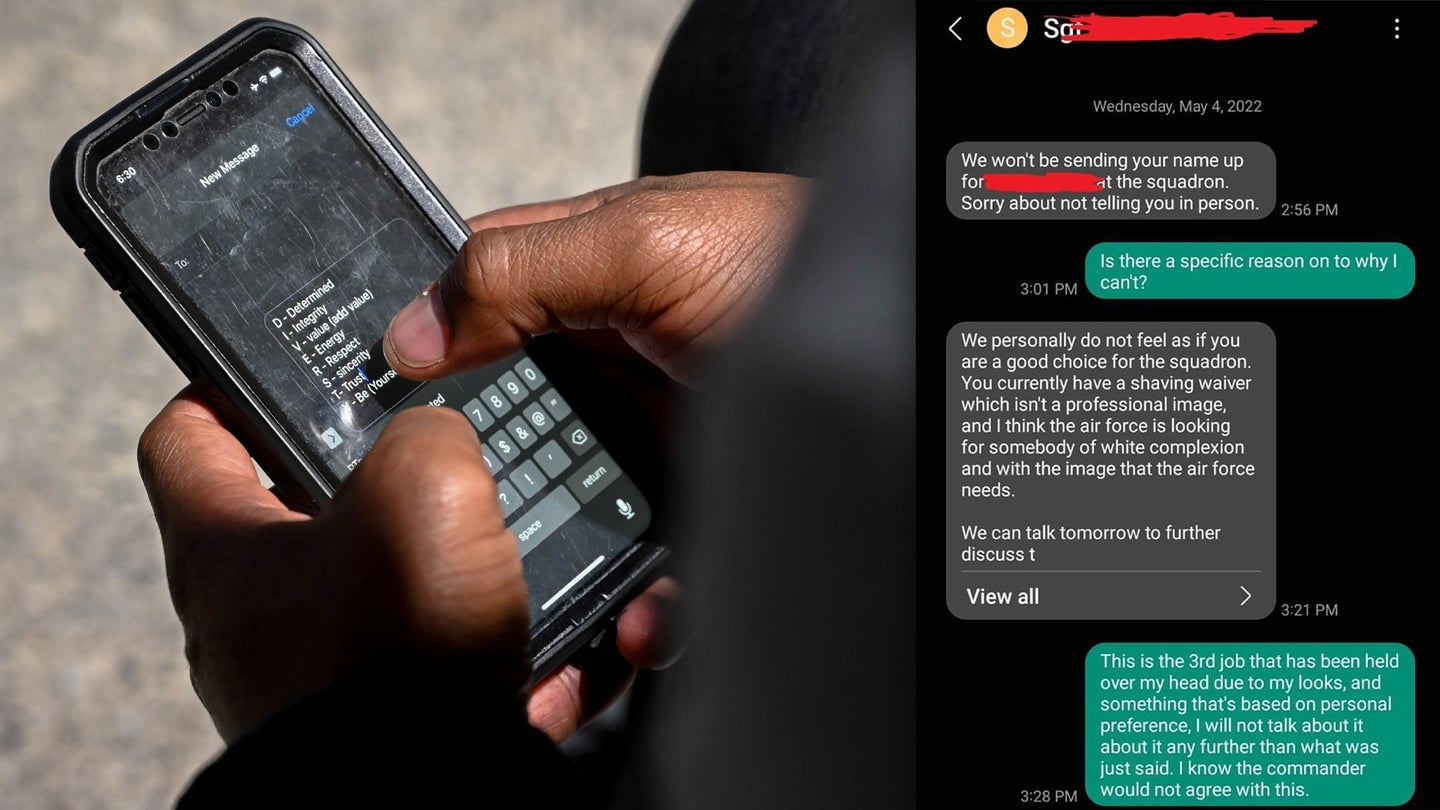 Air Force investigators found that a series of purported text messages where an airman allegedly told another airman that he was not being considered for a position because “the Air Force is looking for somebody of white complexion” were fake.

“Following an exhaustive investigation, authorities determined that the statements published did not occur and the text messages were fake,” Sean Clements, chief of media relations for the 56th Fighter Wing at Luke Air Force Base, Arizona told Task & Purpose on Monday.

In May, base officials began investigating the texts, which first appeared on the popular Facebook page Air Force amn/snco/nco and allegedly occurred between a technical sergeant and a Black senior airman at the base’s 56th Equipment Maintenance Squadron.

“We won’t be sending your name up for [redacted] at the squadron,” the technical sergeant appeared to have texted the senior airman. When the senior airman asked for a specific reason why, the technical sergeant said, “We personally do not feel as if you are a good choice for the squadron. You currently have a shaving waiver which isn’t a professional image, and I think the air force is looking for somebody of white complexion and with the image that the air force needs.”

Air Force regulations prohibit airmen from growing beards, but the service issues waivers to airmen who, for medical or religious reasons, are not able to shave in line with regulations. For example, Air Force doctors can allow airmen to grow well-kept beards if they suffer from painful razor bumps, a skin condition that affects many Black men. However, many airmen with shaving waivers have reported facing prejudice despite their legitimate condition or religious beliefs.

“Male beard growth beyond that allowed by USAF regulation can cast members in a negative light as it can be considered unprofessional,” wrote Air Force Lt. Col. Simon Ritchie, a dermatologist who, along with several colleagues, published a study last year about the beard prohibition’s discriminatory effect on Black airmen. The study found an association between shaving waivers and a significantly longer time between promotions.

Back at Luke Air Force Base, the senior airman appeared to respond to the supervisor’s text by saying that “this is the third job that has been held over my head due to my looks, and that’s something based on personal preference.

“I will not talk about it any further than what was just said,” he added. “I know the commander would not agree with this.”

At the time, a source close to the matter said that the technical sergeant was the senior airman’s flight production superintendent. One former maintenance airman explained that production superintendents oversee the planning and scheduling for a maintenance shop. The senior airman at Luke was applying for a Unit Fitness Assessment Cell position, which in Air Force regulations refers to airmen who conduct and oversee physical fitness tests.

But six months later, investigators say they found that the text exchange never occurred at all, though Clements could not give more specifics.

“Unfortunately, we will not be able to offer further comment at this time as the individual may appeal their non-judicial punishment,” the spokesperson said.

When asked specifically if the investigation found that the senior airman faked the texts, Clements said that he could not confirm that information on the record.

“On the night in question I was struggling with a concussion,” the cadet candidate said. “Therefore I wasn’t myself. … I’m sorry I didn’t say anything before. I should’ve just gotten treatment for my head.”

The faked texts at Luke Air Force Base touch on two cultural flashpoints within the Air Force. The first is the service’s ongoing efforts to confront discrimination within its ranks. In 2020, The Air Force published a sweeping review that found that Black service members are disproportionately punished and promoted more slowly when compared to their White peers. The Air Force also studied a gender-based disparity review, which found that one out of every three military women who responded said they experienced sexual harassment during their Air Force career.

Despite the Air Force’s well-publicized disparities, the service is still drawing in many non-White and female recruits. Last month, Maj. Gen. Edward Thomas Jr., head of the Air Force Recruiting Service, said his command exceeded its ten-year average for bringing in enlisted airmen in every major non-white demographic, including Black, Hispanic, Asian-American, and female recruits. The problem, Thomas said, is how to attract a more diverse pool of officers, particularly aviators. In response, the service formed “Det 1” a group of more than 21 airmen solely focused on increasing rated officer diversity in the Air Force. In the Air Force, rated career fields include pilots, combat systems officers, air battle managers, and drone pilots.

The second cultural flashpoint is the issue of facial hair in the Air Force. For decades, U.S. military leaders have prohibited service members from growing beards, arguing that facial hair not only disrupts a clean, professional appearance but also interferes with the seal of a gas mask, oxygen mask, or other devices that service members wear to survive hazardous environments. While the service issues waivers for airmen who cannot shave in line with regulations due to medical or religious reasons, those waivers might harm the airman’s career prospects due to a long-standing cultural aversion to facial hair in the military.

Adhering to the Air Force’s prohibition on beards is difficult for many Black airmen who have a medical condition called pseudofolliculitis barbae, or PFB. Also known as razor bumps, PFB is a skin condition that makes shaving painful and can lead to permanent scarring if the skin is not allowed to heal. Men of any race can have PFB, but the condition is commonly found among Black men.

The promotion system is not necessarily inherently racially biased, wrote the authors of last year’s Air Force study on the beard ban’s effect on Black airmen. But it is biased against facial hair, “which will likely always affect the promotions of Blacks/African-Americans disproportionately because of the relatively higher need for shaving waivers in this population.”

Clements, the spokesperson for the 56th Fighter Wing, emphasized that any kind of racial bias is not welcome in the unit.

“The 56 Fighter Wing has a zero-tolerance policy on acts of discrimination,” he said.