Could the defense industry produce Choco Tacos that actually work? 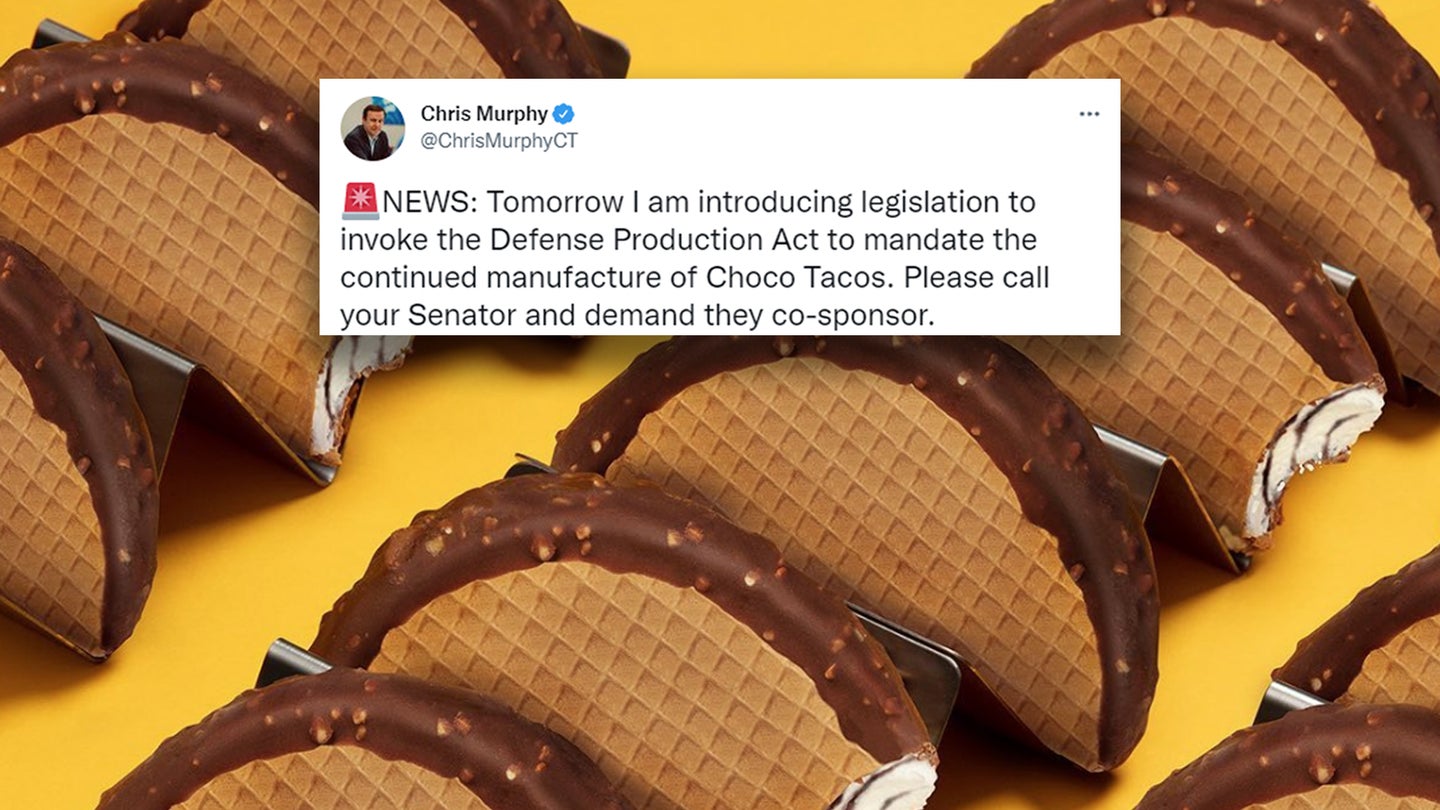 There are many reasons why it would be a bad idea to use the Defense Production Act to make Choco Tacos. (Task & Purpose photo composite/Image via Klondike/Screenshot via Twitter).
SHARE

The defense industry is like a factory that only produces broken toys. It finds new and ingenious ways to create solutions looking for problems that don’t exist – and then delivers technology that doesn’t do the one job it is built for.

For these and other reasons, it would be a terrible idea to call on the defense industrial base to save the Choco Taco after Klondike, the Unilever-owned company that makes frozen dairy desserts, announced on Monday that it would stop producing the beloved delicacy

First developed in Philadelphia in 1983 and consisting of Kosher-certified ice cream bars in a taco-shaped waffle cone topped with chocolate and peanuts, each Choco Taco had 230 calories, was sold either individually or in packs of four, and was long considered a “classic American treat” by ice cream lovers everywhere.

“Over the past 2 years, we have experienced an unprecedented spike in demand across our portfolio and have had to make very tough decisions to ensure availability of our full portfolio nationwide,” Klondike announced in a news release. “A necessary but unfortunate part of this process is that we sometimes must discontinue products, even a beloved item like Choco Taco.”

After nearly 40 years of providing countless Americans an expedited path toward Type II diabetes, the Choco Taco had seemingly shed its corporeal existence and gone to the great ice cream freezer in the sky.

Yet Sen. Chris Murphy (D-Conn.) tweeted on Monday that he planned to call on Congress to utilize an authority that would allow defense companies to maintain the United States’ strategic Choco Taco stockpile.

“Tomorrow I am introducing legislation to invoke the Defense Production Act to mandate the continued manufacture of Choco Tacos,” Murphy tweeted. “Please call your Senator and demand they co-sponsor.”

Choco Taco enthusiasts should not get their hopes up, though.  A congressional aide confirmed to Task & Purpose that Murphy was just being humorous.

Still, Murphy’s joke raises a series of intriguing questions about whether Choco Tacos manufactured under the Defense Production Act would be good for the American public. One of the biggest questions is whether the big defense companies could build a Choco Taco that actually works.

One need look no further than Boeing’s KC-46 aerial tanker. The Air Force’s two much older tankers, the KC-135 and KC-10, both have windows that allow a boom operator to see the aircraft that needs to be refueled. But the KC-46 has several cameras and other sensors so that boom operators can tank up another aircraft.

That’s all well and good, but it turns out that the window technology onboard KC-135 and KC-10s works better than the high-tech cameras on the KC-46. Brian Everstine, who was a reporter with Air Force Magazine at the time, noted some of the shortcomings with the KC-46 when he went on a refueling flight in March 2021.

“The camera feed does not accurately show the end of the boom—there’s about another foot and a half beyond what is visible on the screen, so boom operators use the shadows to gauge where the tip is before connecting to the receptacle,” Everstine wrote. “If there’s no shadow, on a cloudy day, for example, the operator has to rely on experience, rather than technology, to make the connection.”

The Air Force initially claimed that Boeing would pay to fix the KC-46’s panoramic sensor suite, but in May the service admitted that it would actually foot the bill.

If Boeing were awarded a contract to manufacture Choco Tacos, it is likely that the company would try to improve on the design by replacing the chocolate topping with something much more advanced, like Strychnine. It’s also highly possible that taxpayers would end up having to pay for future modifications of Boeing’s Choco Taco, such as replacing the poisonous topping with something slightly less toxic, such as asbestos.

Another issue is whether the Pentagon would use the Defense Appropriations Act to keep the Choco Taco production lines going, or if the military would hand out wads of cash to defense contractors, as it did at the start of the novel coronavirus (COVID-19) pandemic.

The Washington Post discovered in September 2020 that the Pentagon had spent $1 billion out of a $3 trillion COVID-19 relief bill passed by Congress on items that had nothing to do with protecting Americans from the disease, including body armor, uniforms, and drone technology (A Pentagon spokeswoman explained at the time that the COVID-19 relief bill did not specify that the money had to be spent just on medical equipment).

The risk that the military using the Defense Production Act to create another slush fund for defense contractors rather than expediting the supply of Choco Tacos cannot be overstated. But for now, it appears the defense industrial base won’t be tasked with saving the Choco Taco – unless the People’s Republic of China leaps ahead of the United States in terms of Choco Taco technology. If that happens, Congress might have to raise the defense budget to $1 trillion per year to prevent a Choco Taco gap.

For right now, however, it would be best to let the Choco Taco fade away, like the pivot to the Pacific, increased lethality, and the Marine Corps’ beloved Silkies.