“I’ve been in [the Army] 10 years, and I’ve been training for this every one of those days.” 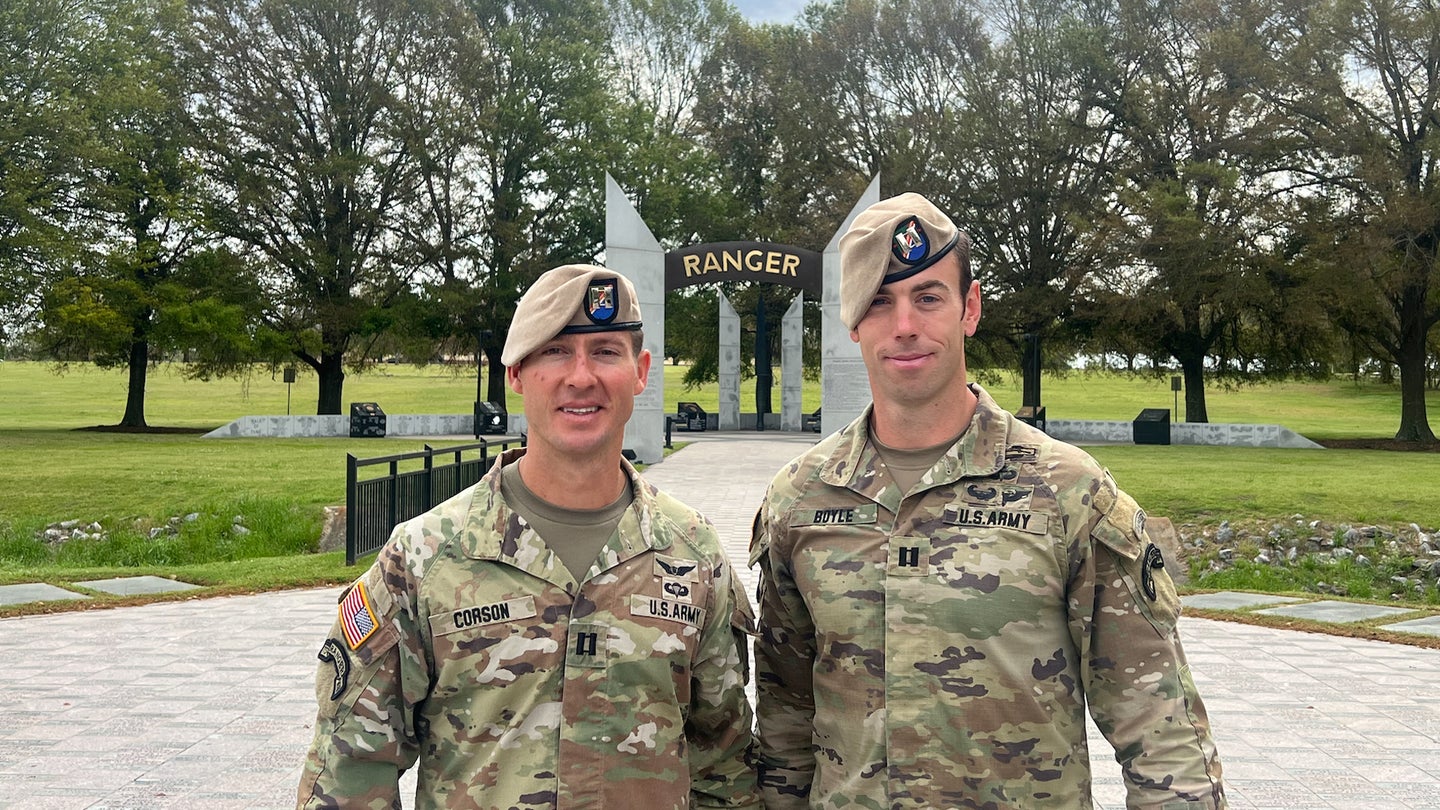 Capts. Joshua Corson and Tymothy Boyle from the 75th Ranger Regiment have been officially crowned the winners of the Army’s 2022 Best Ranger Competition.

Held over three days at Fort Benning, Georgia, the competition brought together 51 two-man teams from around the service, including one airman who serves with the 75th Ranger Regiment. Starting before dawn on Friday, the teams were put through 72 hours of rigorous, physically and mentally draining tasks throughout the day and into the night.

“The title of ‘Best Ranger’ doesn’t really fit what we feel,” Boyle said. “I definitely feel that the best Ranger is out there somewhere leading a squad in Savannah or out at [Joint Base Lewis McChord], or potentially overseas right now doing work for our country. We don’t feel like the best Rangers right now but it is a humbling experience to be able to represent our organization.”

Corson agreed, saying the victory was “almost a guilty thing to be the ones up here, when they [other competitors] easily could have been — had a couple of things changed, a pull-up or this or that, they could be the ones up here.”

The tasks for competitors ranged from physically demanding obstacle courses to an Army Combat Fitness Test, a memory game to test how well they retain information under stress, a 19-mile ruck march of which they were not told the final distance, a grenade assault course, various shooting tasks including rifles, shotguns, and pistols, as well as .50 caliber machine guns and mortar systems, and timed casualty response and recovery. After each day’s final event, teams were cut from the competition, with 25 axed from competition after day 1 and another 12 dropped on the second.

“The Rangers being recognized today have a high-performance mindset, and hold themselves accountable for vital daily disciplines to consistently achieve optimal results,” said Col. Antwan Dunmyer, commander of the Airborne and Ranger Training Brigade. “They have a fanatical focus on doing the things that are non-negotiable, fundamental, and essential, and doing them better than anyone else. These Rangers are at the tip of the spear for building and leading lethal, adaptive teams, and they do this proudly and well, without fanfare, a huge signing bonus, or an off-season.”

Corson and Boyle both received Meritorious Service Medals, for “displaying to the world that they are specially selected and well-trained soldiers who exemplify the Ranger Creed,” the Victory Medal by the National Infantry Association, and M17 9mm pistols from Sig Sauer.

The competition over the weekend ended on Sunday after a buddy run, during which the competitors ran from a point on Fort Benning to the nearby National Infantry Museum. They ran past family and friends and other spectators as they crossed the finish line, drenched in sweat as they were running under a blistering sun with their full kits on.

The first thing Boyle said he was thinking about as he and Corson were the third team to cross the finish line was getting ice and water. “I was not in a good physical place,” he told Task & Purpose.

Corson’s first thought was relief. After months of training and pushing themselves harder and further over those three days, “it was like, I can’t wait to be able to sit down and eat a burger and drink a soda or something and celebrate a little bit.”

It sounds simple, but that’s exactly the kind of thing Corson and Boyle haven’t been able to do as they relentlessly trained to prepare for the three-day competition. Looking back at their training, they said their competitive nature pushed them to take ew days off, never letting up unless necessary to give their bodies time to recover. And while they pushed hardest over the last three months, Boyle, who has deployed twice, credited his Army career for building the foundation of physical activity that helped him succeed.

“I’ve been in [the Army] 10 years, and I’ve been training for this every one of those days,” said Boyle, who has had five combat deployments and two support deployments throughout his career. “[Physical training], even six months ago I never thought I was going to be doing Best Ranger but I was doing conditioning events, whether it was with my unit or on my own. That base of physical fitness has been built over years.”

It’s no secret that the Best Ranger Competition is very physically demanding, but Boyle believes the mental and emotional preparations are just as important, if not more so, than the physical training. Having a teammate you can count on, building rapport with that person to know when to push and when to pull back, and knowing how to pick them up after a bad run is critical. As is ensuring that you don’t let your “highs get too high and your lows get too low.”

Corson added that it’s crucial to know when to dig deep, and know that even when you think you’re out of energy and can’t push anymore, “you can go further and you can go harder.”

“If you can keep that kind of mental state through the craziness which is Best Ranger, I think you’re going to be more successful than just somebody that is physically fit but doesn’t have those extra pieces put together,” he said.

That’s not to say that there weren’t “how the hell did we get here?” moments during the competition. During the overnight land navigation event on Saturday evening, Corson said the two were in the “middle of a swamp, in thorn brushes.” They knew where they were going but the thicket “just would not end,” he said.

“It was just the point of like, what are we doing? What happened, how did we get to this point?” he laughed. “Just one of those moments where you look at each other like, where are we?”

Since winning the competition, the two said they’ve already heard from other soldiers who are interested in competing. And as for new soldiers just joining the Army, Corson encouraged them not to “give up on your dreams.” He wanted to compete in the Best Ranger Competition since he was in ROTC at college, he said, and while the door didn’t open “my first year, my third year, my eighth year,” here on his 10th year in the Army, “the door opened.”

“I took it and things worked out,” he said. “So don’t give up on it. Keep striving for it, put in the work when you need to put the work in. If you’ve got a year or two on staff and you’re just grinding away, grind away and then you keep up that effort.”

Boyle agreed, saying the Army is a place where people will be rewarded for the hard work they put in. From the moment soldiers enter basic training, if they’re the best of the trainees they could be given an Ranger or Airborne School slot, and if you “get that slot, you can be the best guy there, they’re going to give you another opportunity.” That kind of success builds on top of itself, he said, and can take someone wherever they want if they work hard enough.

“I’m jealous of guys that are, you know, 19 years old and just joining the Army,” Boyle said. “Because they can literally go do whatever they want if they’re just willing to put in the work.”