He also urged soldiers to pray for the safety of Supreme Court justices and families “whose lives are in danger from Satanic-influenced evildoers." 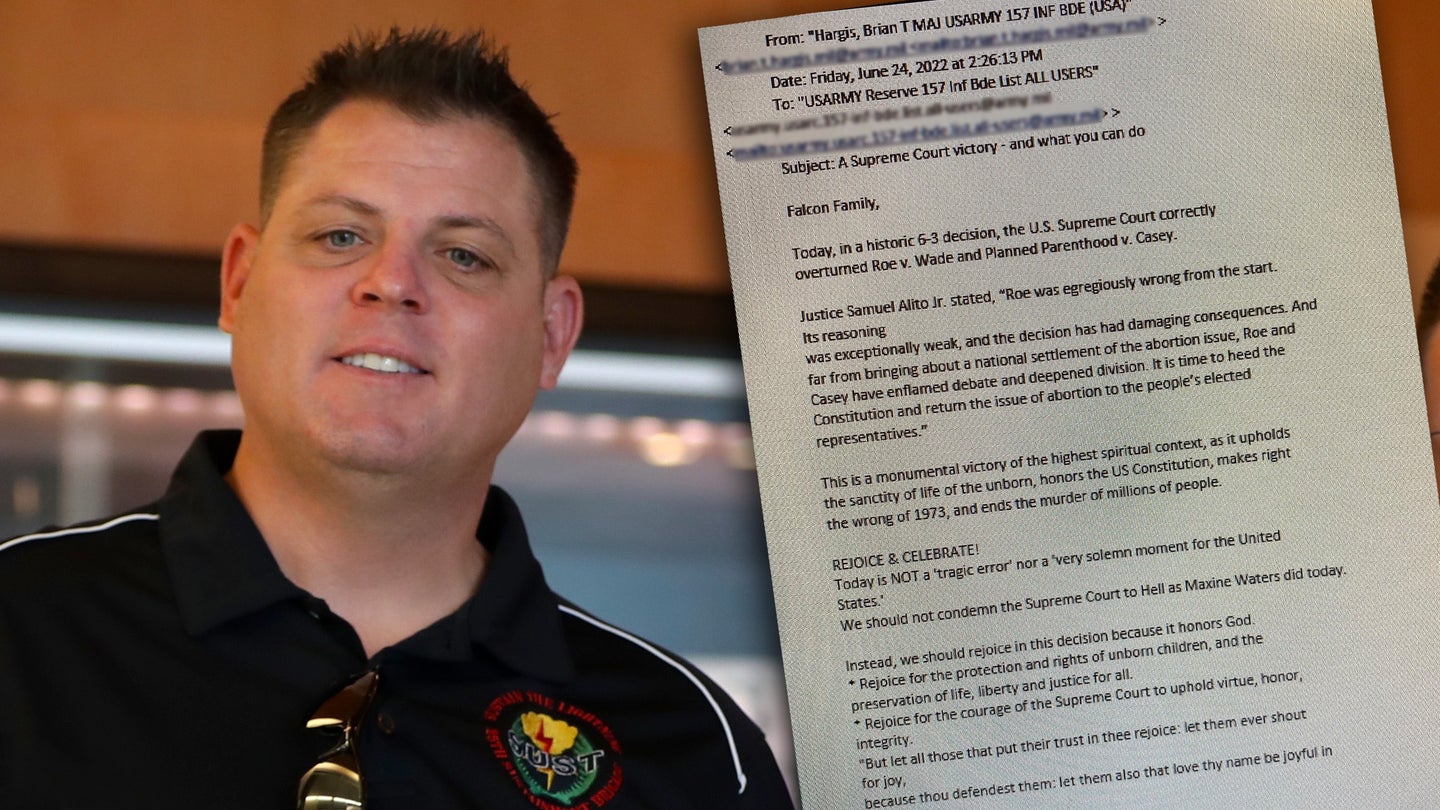 An Army chaplain emailed his entire unit on Friday to celebrate ending the “murder of millions of people” after the Supreme Court struck down Roe v. Wade and invalidated the constitutional right to abortion that had been enshrined in law for almost 50 years.

“Today, in a historic 6-3 decision, the U.S. Supreme Court correctly overturned Roe v. Wade and Planned Parenthood v. Casey,” wrote Maj. Brian T. Hargis, the brigade chaplain for the 157th Infantry Brigade, in an email sent to the Army Reserve unit’s “ALL USERS” organizational inbox that was screenshotted and posted on Twitter.

“This is a monumental victory of the highest spiritual context, as it upholds the sanctity of life of the unborn, honors the US Constitution, makes right the wrong of 1973, and ends the murder of millions of people,” wrote Hargis, who served as a Green Beret for over a decade before becoming a chaplain in 2007, according to his LinkedIn profile.

“REJOICE & CELEBRATE!” he continued. “Today is NOT a ‘tragic error’ nor a ‘very solemn moment for the United States.’ We should not condemn the Supreme Court to Hell as [Rep.] Maxine Waters did today. Instead, we should rejoice in this decision because it honors God.”

Hargis went on to quote from several Bible verses before offering advice to soldiers on what they should do next: “LIVE THE OATH!” to the Constitution and pray not only for the safety of Supreme Court justices and families “whose lives are in danger from Satanic-influenced evildoers,” but “that the curse on America will be lifted as a result of the ruling.”

Hargis further advised soldiers to contact a chaplain if they felt challenged by a birth decision, would like to “know more about God’s view of life at conception,” or are concerned about pregnancy from “rape, a one-night stand or unplanned conception.”

“I am the product of a bartender, a teenage girl and [a] one-night stand in 1972,” Hargis wrote. “My mother considered abortion…but we are both glad that she chose life.”

Hargis did not respond to questions from Task & Purpose. In an auto-reply email, he wrote that he was in the process of transferring from the 157th Infantry to Installation Management Command, Pacific in Hawaii.

The number of soldiers who received the email is unclear, but two senior officers responded with their own emails taking issue with Hargis’s comments.

“This is an inappropriate message to send on this medium and I cannot endorse your statements or sentiment,” wrote Lt. Col. Joshua Hunter, a battalion commander in the brigade, in reply to Hargis. “I ask that you recall this message and allow individuals to hold their own opinions on this matter.”

In a separate email, the chaplain’s boss, Col. Troy Mills, wrote to the brigade and addressed the “many difficult societal and political issues evoking strong emotions” that can make it difficult for some to “constrain one’s response” in light of deeply held beliefs. Hargis was not mentioned by name.

“Members of the Armed Forces maintain their First Amendment rights, however, there are appropriate times and places to express opinions,” wrote Mills. “At work, in uniform, or using government equipment/systems is not the correct method. It can erode the trust and confidence of others and appear that the individual speaks on behalf of the military.”

The colonel stressed that soldiers should always remember that others may hold opposing opinions “just as deep, sincere, and valid based on their own history, morality, and belief systems.” Most importantly, he added, “everyone in our formation will be treated with dignity and respect.”

One soldier in the brigade, however, defended the chaplain as a “phenomenal dude” who is now getting blowback for “standing up for his faith.”

“I don’t feel the chaplain stepped outside his bounds,” the soldier told Task & Purpose. “If you ever met this guy you would understand, he spent the bulk of his career in the Special Forces realm.”

For military service members across the country, the Supreme Court’s decision raises many questions, most of which remain unanswered. In Texas, Oklahoma, Missouri, and Kentucky, all of which are home to major U.S. military installations and large numbers of personnel, so-called “trigger laws” have already effectively banned abortion following the Roe decision.

“If a soldier is pregnant on post, but then they do another thing and she’s not, are they going to question her if she had an abortion or if she had a miscarriage?” Lisa Pfeffer, a former Army human resources specialist, told Task & Purpose in May. It’s “very intrusive, and very private,” she said, but the military is different in that they could “really ask those things.”

Defense Secretary Lloyd Austin said Friday that the Pentagon was examining the decision and evaluating policies to ensure “seamless access to reproductive health care as permitted by federal law.”

“Nothing is more important to me or to this Department than the health and well-being of our Service members, the civilian workforce and DOD families,” Austin said. “I am committed to taking care of our people and ensuring the readiness and resilience of our Force.”

Military chaplains have been in hot water over controversial statements before: In January 2021, an Army chaplain was investigated after posting on Facebook that transgender troops were “mentally unfit” to serve. And the following month, a first lieutenant training to be a chaplain had his application put “on hold at this time” after he criticized a memo from top military leaders as “deceptively seditious.”

Yet none of them have ever come close to pulling ahead in the contest for most embarrassing thing a chaplain has ever done.