In a war against China, fighting in the jungle could be critical. These soldiers can teach you how

“You can do land nav training at Fort Bragg or Benning a million times, and then you come out here and it’s different.” 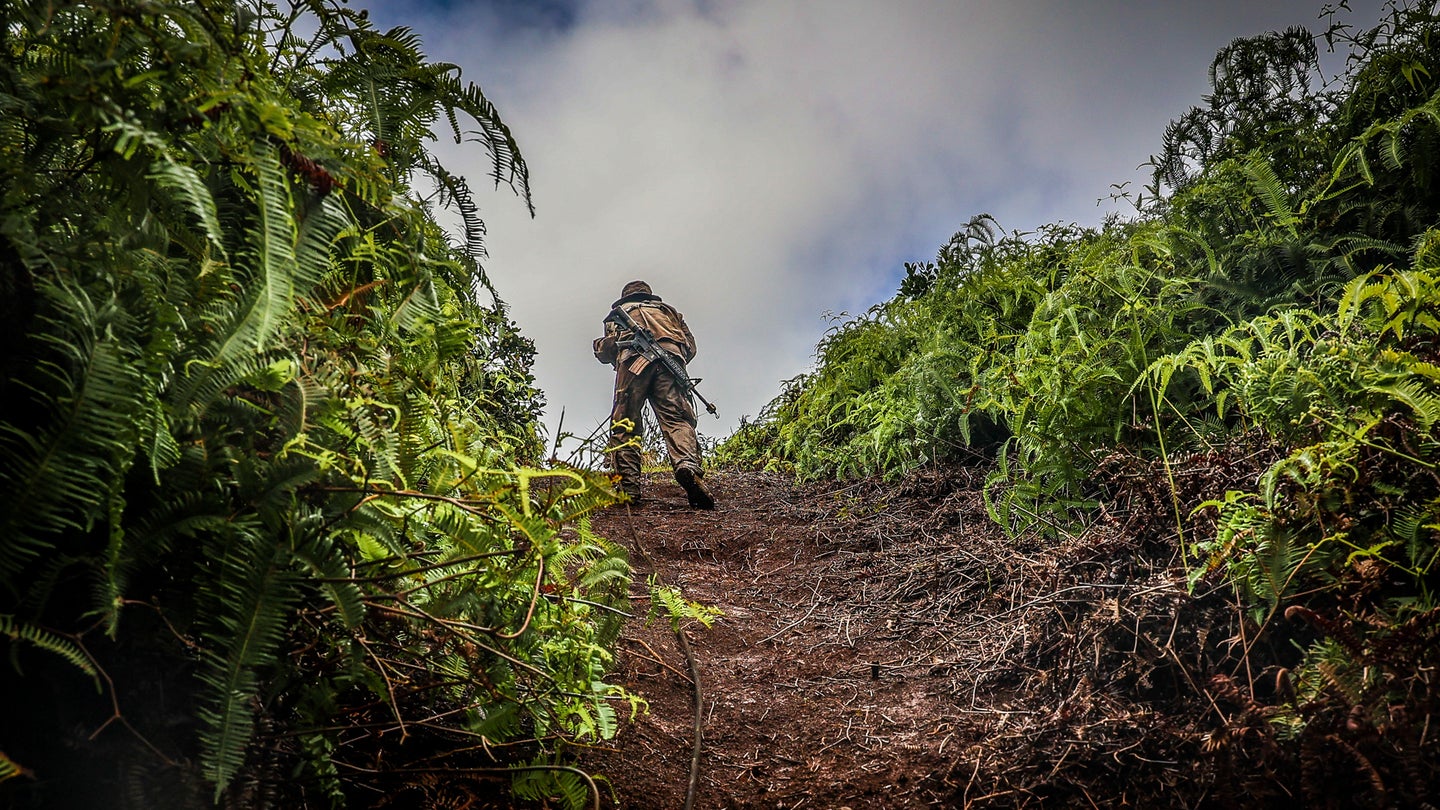 Just a handful of miles away from Schofield Barracks, Hawaii, sits what could soon be the most consequential training course for soldiers: The 25th Infantry Division’s Lightning Academy, home to the Jungle Operations Training Course.

The 12-day course on Oahu is exactly what it sounds like; a program that teaches soldiers how to survive in the jungle, which is becoming more and more of a reality as the U.S. military turns its focus to the Indo-Pacific and a potential fight with China.

The jungle is an environment the Army hasn’t operated in for decades, and as one might imagine it’s incredibly different from the desert-like terrain soldiers are more familiar with after 20 years of combat operations under the umbrella of the Global War on Terror. And while fighting in the jungle might seem far-off, Lightning Academy 1st Sgt. Scotty Moore, and executive officer Capt. Nick Schuch, told Task & Purpose last week that it’s critical to get the basics down now, instead of waiting until it’s too late.

“Even if we don’t have to fight and win in a jungle environment for the next 15-20 years, it’s better that we’re getting ahead of the problem set now instead of it being a knee-jerk reaction,” Moore said. “Because when we went to CENTCOM, when that became a thing, that was a knee-jerk reaction right? Like we were learning lessons and losing a bunch of people as we were doing it. Now, we’re getting ahead of a problem set and saying, ‘Hey, what are the lessons we already know from the jungle from when we fought there? Let’s train those now so in 15-20 years when we have to, or next month, we’re ready to do it and not learning the hard way by sending people home in boxes.’”

For more than 40 years after World War II, soldiers were able to get premier jungle training in Panama. But that training course was shuttered in 1999 with no plan from the U.S. to replace it. Instead, according to the L.A. Times, soldiers were expected to get that training “only as small units through exchange programs with other countries.” Then in 2013, the Army re-opened the course at Schofield, which now trains anywhere from 760 to 950 soldiers a year.

As a way to get caught up on best practices quickly when the course re-opened, the Army sent soldiers to train in the jungle with other countries’ militaries. They learned their foreign partners’ doctrine and how they live and survive in a jungle environment, bringing those skills back to the U.S military. The Army combined that instruction with lessons learned from World War II, Korea, and Vietnam, and developed the Jungle Operations Training Course (JOTC) as it stands today.

Operating in the jungle requires an entirely different set of skills than most soldiers have honed during the Global War on Terror. At the Lightning Academy, soldiers are taught how to catch, skin, and cook their own food; various ways of starting a fire with things found in the jungle like bamboo, tree sap, and tree bark; how to keep yourself and your equipment dry while navigating rivers; and how to safely rappel with your gear down the side of a ravine.

It’s also about getting used to the small things, like not shaving in order to conserve water and avoid infection — shockingly, having a bit of facial hair does not appear to have detrimental impacts on their readiness — not blousing your boots to avoid heat casualties, and keeping your socks changed and clean.

In the jungle, you’re “not going back to a FOB to get your laundry done,” Moore said.

One of the first things soldiers do when they get to the academy is run 5 kilometers — roughly three miles — through the jungle. It’s one of the more challenging things for students, in addition to land navigation. Part of that is because of the nature of the jungle on Oahu, which Moore explained is called a secondary jungle because there are not “a lot of thick canopies,” and that allows sunlight through which results in “all this undergrowth that comes out.” That undergrowth isn’t as common in jungles with thicker canopies, and it makes land navigation all the more difficult.

“Match that with what we call gulches and ravines, they’re just super deep, and once you’re out there alone and afraid, like ‘Where am I going? What am I doing?’” Moore said. “It’s a lot different than your traditional land nav course.”

Capt. Mac Lalor, the commander of Lightning Academy who was going through the academy’s air assault course the day Task & Purpose visited, said the land navigation was the hardest piece of jungle training.

“No matter what you do out here, you just have to know the terrain to be able to move through it,” he said. “You can do land nav training at Fort Bragg or Benning a million times, and then you come out here and it’s different.”

And the leadership at the Lightning Academy wants you to do well — they’re “not concerned with protecting the tab, we want to get the division ready to fight,” Moore said. One of the biggest obstacles for new students is one of the simplest: their packing lists. If a soldier coming to the course wants to ensure they have what they need, Moore said they’ll have an instructor check their list ahead of time so they know they’re good to go.

Aside from training soldiers within the 25th Infantry Division, the JOTC also regularly sees special operations units come through ahead of deployments. Typically they’ll do what the instructors called “MBT,” or menu-based training, meaning the SOF units tell them ahead of time what they’re interested in working on. Most recently, Moore said soldiers with the 2nd Battalion, 75th Ranger Regiment came out to practice mobility training with their military dogs.

In addition to training U.S. service members, the JOTC is also a frequent destination for foreign militaries. The course recently had a platoon from the Indonesian military come train with an infantry regiment from the 25th ID, and will often send its own instructors to other countries’ courses for the same learning experiences. It’s a great opportunity for other militaries to train with the U.S. in a new environment, Lalor said, sometimes because Oahu has fewer animals in the jungle that will kill you than the other countries.

“When they come here, they’re like, ‘Wait there are no tigers, there’s nothing that wants to kill you, there are no piranhas in the water?’” he said.

Those partner countries often have different techniques for doing things that the U.S. can learn from. In one instance, instructors learned a rappelling technique from another country that the U.S. had “no idea existed until we sent instructors to those courses.”

“It’s really nice to have instructors have all that experience because when students are going through the course and they’re like, ‘Hey, what do I do in this scenario? What do I do in this scenario?’ The instructors aren’t just like, ‘Oh I’m only allowed to teach these three techniques,’” Lalor said. “They can be like, ‘This is what Brunei does, this is what Brazil does, this is what [the Defense POW/MIA Accounting Agency] does down in Pearl Harbor.’”

And while it could be crucial for soldiers to know how to fight in the jungle, the course isn’t just for combat arms. Lalor said it’s just as important for mapmakers in U.S. Army Pacific to try it out, or for logisticians to learn what it could be like to resupply units in that environment. Moore added that the training is important for leaders if only to know what their soldiers are facing and why it might take them longer to get from point A to point B, and to be realistic with planning.

Too much equipment, for example, could be detrimental in the jungle. Moore said you “take what you need for the fight” and to survive. And while the Army has been all about “we own the night” with advanced night vision goggles and other capabilities, that won’t matter in the jungle.

“In the jungle, nobody moves at night. Nobody fights at night,” he said. “And the reason is because at that point, the jungle becomes 10 times as dangerous.”

Indeed, training for the jungle environment means, in many cases, tossing out what you’ve always known and challenging yourself to think differently. Because at the end of the day, the objective is still the same: get where you need to be as quickly and efficiently as possible and be ready to fight when you get there.

“The history of jungle operations shows that the unit that can maneuver the fastest and arrive ready to fight — they’re the ones that are going to win,” Moore said.